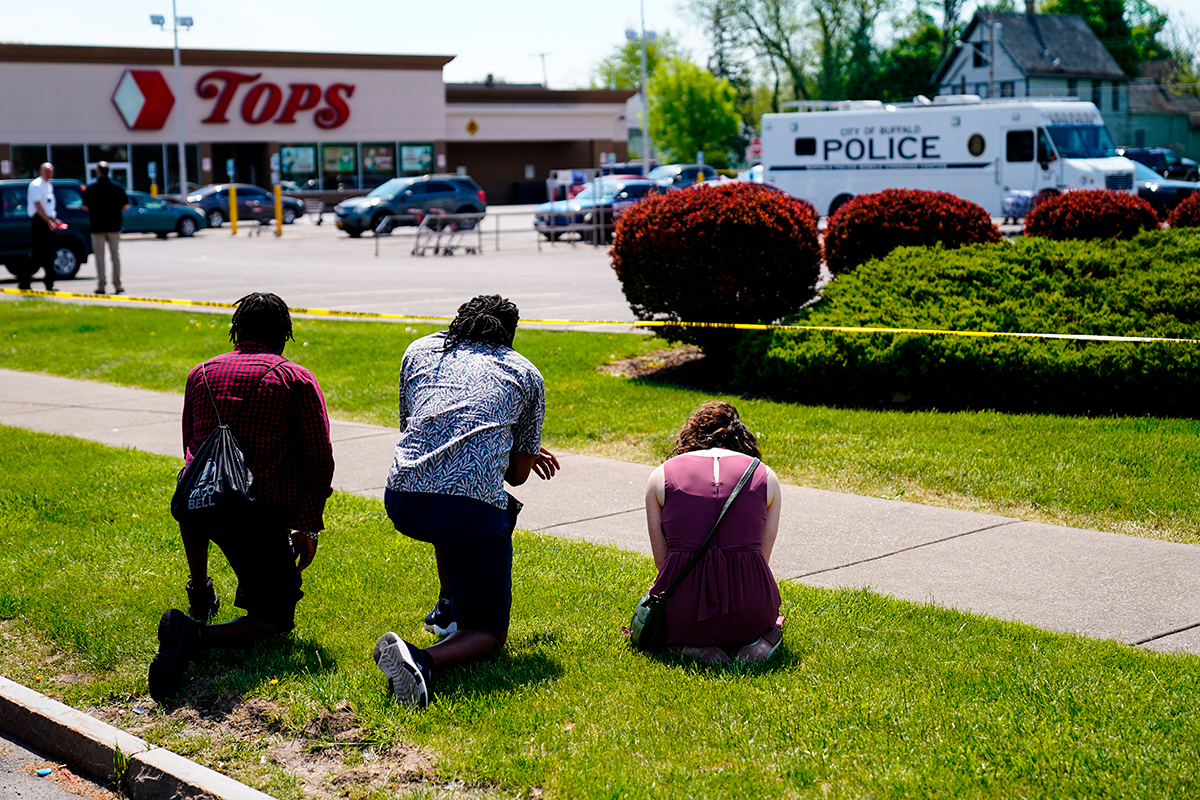 People pray out of doors the scene of the mass capturing in Buffalo, New York, on May 15, 2022 (AP Photo/Matt Rourke)

In Buffalo, New York, ten other people created within the symbol of God, they all Black, have been killed final month in a racially motivated assault.

The word “the image of God” (tselem elokim) is located so incessantly upon our lips as Jews—and the lips of our Christian neighbors—that we will have to pause and suppose once more about its beginning and its that means. The explanation why the Torah prohibits making a picture of God is since the Kadosh Barukh Hu (the Holy One, blessed be He) has made a picture of his very self: the human being. As Rabbi Akiva, martyred by means of Hadrian in 137, taught, haviv (valuable) are people as a result of they’re created in God’s symbol.

All the mitzvot (commandments) of the Torah are grounded in this fact. The development of civilization is impossible and unthinkable without this fact. For all their wisdom and commitment to ethics, Aristotle, Socrates, Plato, and Kant were unable to develop a more pure and enduring foundation for the sanctity and dignity of the human.

The human is the image of God. Indeed, for that reason the Torah commands: “Whoever sheds the blood of an adam (human), by adam shall their blood be shed; For in his image did God make the adam(Gen 9:6). The Buffalo killer (whose name should never again be mentioned) set out, if one dare say it, to murder God.

Political scientist Ryan Burge—without whose scholarship it is quite difficult to understand what is happening in the religious and political landscape of America—demonstrates in his 2021 book The None that 73 percent of nones have no higher education. A significant portion of them leave high school and become what Burge calls “loners.” Young men and women who participate in the military or attend college have an opportunity for moral development, which takes place in human relationships fostered by group participation. The loners are, at a critical moment in life, not just socially isolated; they are ethically and morally isolated.

Burge ominously goes on to explain that this is the group that gives us mass shooters. It must also be noted that these people are not afflicted with incapacitating mental illness. They have freely chosen evil.

Stephen Ray, the former president of Chicago Theological Seminary, has commented on Burge’s observation, noting that such loners are enabled by structures of permission. By this, Ray means that when prominent figures in American society give voice to ideas and sentiments such as “they will not replace us,” White supremacist loners are authorized to behave as they do.

I believe that one of these structures of permission was provided by senators Ted Cruz and Josh Hawley during the Supreme Court confirmation hearing of judge Ketanji Brown Jackson. Cruz and Hawley did not treat her as someone created in the image of God. Nor did they treat her as an American citizen embodying the best in America, or a judge possessed of significant professional accomplishments born of a first-rate education, a first-rate intellect, and a first-rate ethical moral sensibility, not to speak of Deeply held Christian beliefs. Instead, these two mean-spirited senators treated Jackson as less than human—and they did so in the presence of her parents and her children. This is but one recent example of leaders providing a structure of permission for violent loners to act upon their racism and hate.

Following the end of prophecy, the Jewish tradition no longer attempts to address the question “Why?” when horrific and evil events overtake us. Rather, it seeks to answer a different set of questions: Now that we have been subjected to such events, what must we do? How should we do it? With whom should we do it? When and where should we do it?

One thing we should do after the murders in Buffalo is mourning. Generally, mourning means to give cathartic expression to loss, sadness, anger, grief, pain, and weeping. But rabbi Moses ben Maimon (1138–1204), the foremost rabbinic legal authority and philosopher in the Middle Ages, commonly known as Maimonides, departs from the popular sense of the purpose of mourning and gets at a greater truth. For him, the purpose of mourning is to stand for kevod habriyot, the glorious dignity of every human created in the image of God. Every death is an assault on the dignity of the human created in the image of God. Or as John Donne wrote in Meditation XVII, “any man’s death diminishes me, because I am involved in mankind.”

Maimonides teaches that the obligation to mourn falls first and foremost on immediate relatives, then the rest of the family, and then the neighborhood and wider community. All who join in that mourning—in that stand for human dignity—are summoned to be with the mourner. They are not summoned to deliver sermons. They are not summoned to say wise words of consolation, for there are no wise words of consolation in the face of the violation of human dignity. Rather, they are obligated simply to be with the mourner. That is the essence of comfort and consolation in the Jewish tradition: to sit with the mourner and to say nothing, so that the mourner knows that he or she is not alone in standing for the human dignity of their loved one.

Jeffrey Veidlinger’s new book, In the Midst of Civilized Europe, is about the pogroms that took place during the Ukrainian National Uprising between 1919 and 1921. Approximately 100,000 Jews were murdered. These pogroms were spontaneous and popular. They were not perpetrated with an order from the top. They were merely an expression of popular sentiment. That popular sentiment was expressed in a saying that was on the lips of the pogrom perpetrators as they went about their murdering: “No more Jews.”

“Source of This Article:- “https://www.christiancentury.org/article/reflection/mass-shooting-buffalo-was-attack-image-god