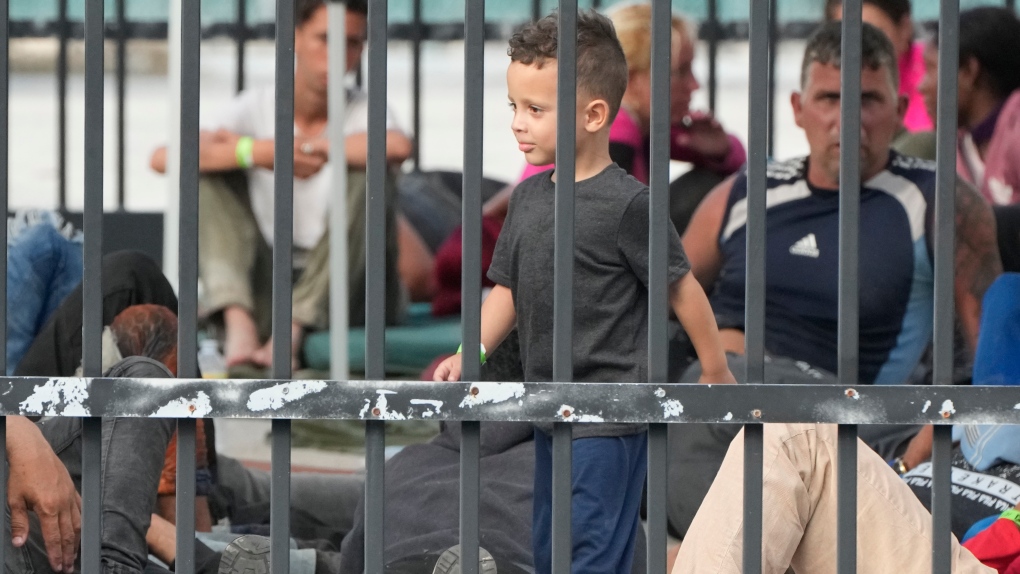 The US Coast Guard removed more than 300 Cuban migrants from a remote island national park off the Florida coast Thursday as the US government sought to handle the latest influx of people arriving by boat from the communist island.

Homeland Security officials said the Coast Guard took 337 migrants from Dry Tortugas National Park on a 113-kilometer trip to Key West, where they will be processed. They were among more than 700 migrants, mostly Cubans, who arrived in Florida by boat over the New Year’s weekend, prompting officials in Florida to appeal to the federal government to do more to deter migrants arriving illegally.

On Thursday, the Biden administration signaled a tougher stance on migrants coming from Cuba, Haiti, Nicaragua and Venezuela, while offering a new path for migrants from those countries to enter legally.

The government said it would immediately begin turning away Cubans, Haitians and Nicaraguans who cross the US-Mexico border illegally, as it has done with Venezuelans. At the same time. it would accept 30,000 people per month from those four nations who arrive legally, have eligible sponsors and pass background checks. It was not immediately clear what impact this would have on migrants who arrive in Florida.

More than 4,400 Cubans and Haitians have arrived in Florida since August amid deepening and compounding political and economic crises in both countries. Almost 8,000 were stopped at sea and returned to their homelands — about 50 per day compared with 17 per day in the 2021-22 fiscal year and just two per day during the 2020-21 fiscal year. Officials said at least 65 migrants have died since August trying to make the dangerous trek in often rickety boats.

Coast Guard Rear Adm. Brendan McPherson said in a statement late Wednesday that despite the increase, “the southeast maritime border is not open.” He asked Cuban and Haitian Americans “to discourage family members in Cuba or Haiti from attempting the dangerous and very often deadly voyage.”

Monroe County Sheriff Rick Ramsay, whose jurisdiction is most of the 290-kilometer Florida Keys island chain, said the influx is taxing his 194-deputy department.

Ramsay, a Republican, said Wednesday that he wants the Democratic president and his administration to do more.

“I’m experiencing about 10 migrant loads per day in my small county, which for me, resources wise, is very challenging,” Ramsay said at an event sponsored by US Sen. To install Rick Scott. “I’m sympathetic to the migrants who come here — I want them to have a happy life. But we have to have a plan.”

Scott, a Florida Republican, said the US is experiencing “a border crisis.”

Florida Gov. Ron DeSantis, a Republican who used state tax dollars to fly Venezuelan asylum seekers from Texas to Massachusetts to protest Biden’s immigration policies, has not said anything this week about the Keys situation. His press office did not respond to email requests for comment Wednesday and Thursday.

Ramon Raul Sanchez with the Cuban-American group Movimiento Democracia said the Biden administration’s new policy is like “trying to use a broken umbrella not to get rained on.” He said the real problem is the Cuban government, whose actions prompt Cubans to flee their country. Now he said he worries even more Cubans may risk their lives by taking to the sea to reach the US instead of flying to Central America and coming by land.

That’s how most Cubans attempt to enter the US In the 2021-22 fiscal year, 220,000 Cubans were stopped at the US-Mexican border, almost six times as many as the previous year.

While federal officials did not give a breakdown of the nationalities of migrants who have arrived in Florida since August, the vast majority who arrive in Florida come from Cuba, which is about 160 kilometers from the Keys. Haitians have a much longer journey — more than 1,130 kilometers. They usually hopscotch between Caribbean islands to reach the US.

Most Cubans will likely be released eventually because the US and Cuba do not have diplomatic relations and the Havana government will not routinely take back migrants who reach US soil, only those who are intercepted at sea.

While some will likely be able to claim they are victims of political persecution at home and be granted asylum, making them eligible for eventual US citizenship, most will probably be designated as economic immigrants who entered the country illegally. They will be required to periodically check in with immigration officials. They will be able to obtain work permits, driver’s licenses and social security numbers — but they won’t be eligible for US citizenship.

Because the US and Haiti have diplomatic relations, most Haitians who arrive illegally and are caught are returned.