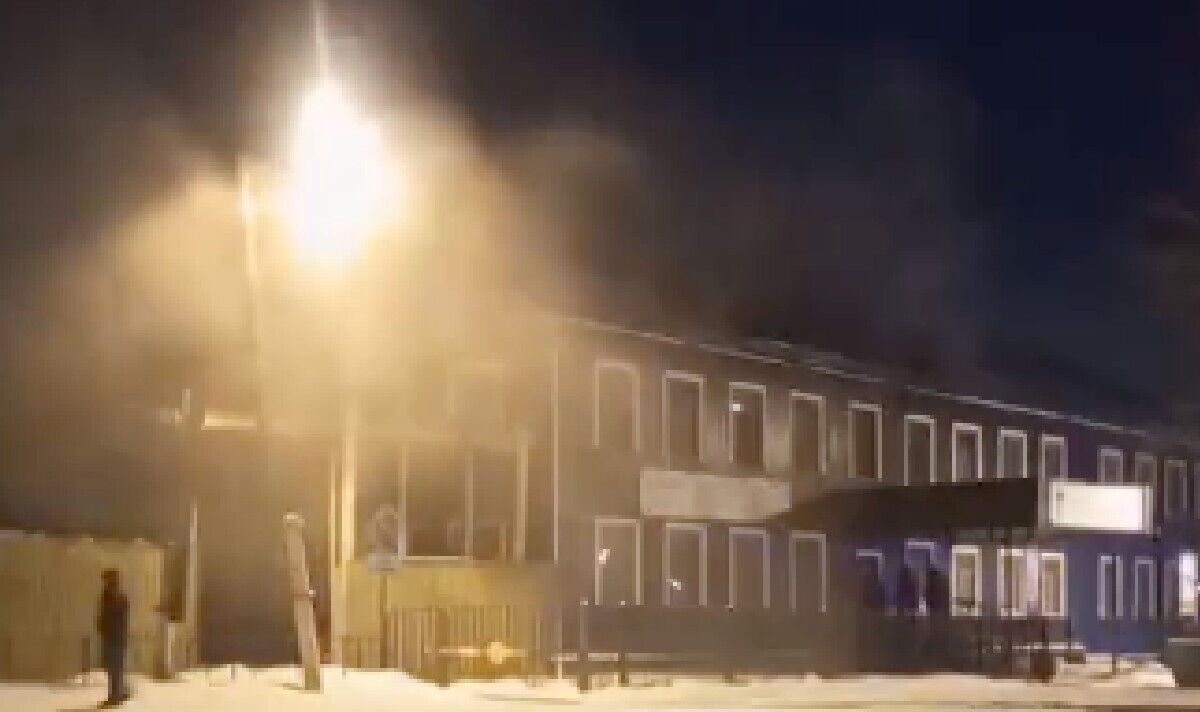 A military building in Bratsk, Russia, was set on fire overnight. The building was reported to go up in flames at about 2am local time. No injuries were reported but two employees were inside. The fire was reportedly started from inside the building. The news was first reported on Twitter by Igor Sushko of the Wind of Change RG think tank in Washington DC.
Firefighters were urgently called to the scene. As a result, the fire managed to spread to less than 40 squares.

Looking at the building’s cameras, authorities noticed a suspicious person dressed in all black.

They climbed over a metal fence. The alleged arsonist is being sought.

It comes as the Russian military claimed Sunday to have carried out deadly missile strikes on barracks used by Ukrainian troops in retaliation for the deaths of dozens of Russian soldiers in a rocket attack a week ago.

Ukrainian officials denied there were any casualties.

Ministry spokesman Igor Konashenkov said the strikes were retaliation for Ukraine’s attack in Makiivka, in which at least 89 Russian soldiers died.

Serhii Cherevatyi, a spokesman for Ukraine’s forces in the east, told The Associated Press that Russian strikes on Kramatorsk damaged only civilian infrastructure, adding: “The armed forces of Ukraine weren’t affected.”

The Donetsk regional administration said seven Russian missiles hit Kramatorsk and two more hit Kostyantynivka, without causing any casualties. It said an educational institution, an industrial facility and garages were damaged in Kramatorsk, and an industrial zone was hit in Kostyantynivka.

Photos he posted showed no indication that it had been an attack on the scale claimed by the Russians or that anyone had been in the buildings when they were struck.

“The world saw again these days that Russia lies even when it draws attention to the situation at the front with its own statements,” Ukrainian President Volodymyr Zelensky said in his nightly video address.

“Russian shelling of Kherson with incendiary ammunition right after Christmas. The strikes on Kramatorsk and other cities of the Donbas — aimed right at civilian sites and right when Moscow was reporting the supposed ‘silence’ of its army.”

Russia had declared a 36-hour ceasefire timed to coincide with Orthodox Christmas celebrations on Saturday. Ukraine denounced the pause as a ploy.

Russia said the attack on Kramatorsk was in retaliation for the Ukrainian rockets that destroyed a facility in Makiivka, also in the eastern Donetsk region, where Russian soldiers were gathered in the early hours of January 1. It was one of the deadliest attacks on the Kremlin’s forces since the war began more than 10 months ago.

Also on Sunday, the Ukrainian military claimed to have hit a residential hall of a medical university in Rubizhne, a town in the Russian-occupied eastern Luhansk region, killing 14 Russian soldiers housed there. The number of injured was unknown, it said.

Elsewhere in the east, Donetsk Gov. Pavlo Kyrylenko said one person was killed in strikes on Bakhmut, and eight others were wounded. The battles for Bakhmut and the nearby town of Soledar remained among the bloodiest on the front, Zelensky said.

In the northeastern Kharkiv region, the town of Merefa was hit during the night, killing one person, and two other settlements in the region were shelled, Gov. Oleh Syniehubov said.

Russia and Ukraine exchanged prisoners Sunday, swapping 50 on each side, according to Konashenkov, the spokesman for the Russian Defense Ministry, and Andriy Yermak, head of the Ukrainian president’s office.