Proud Boys did not ‘stand back, stand by’ on Jan 6: US prosecutor 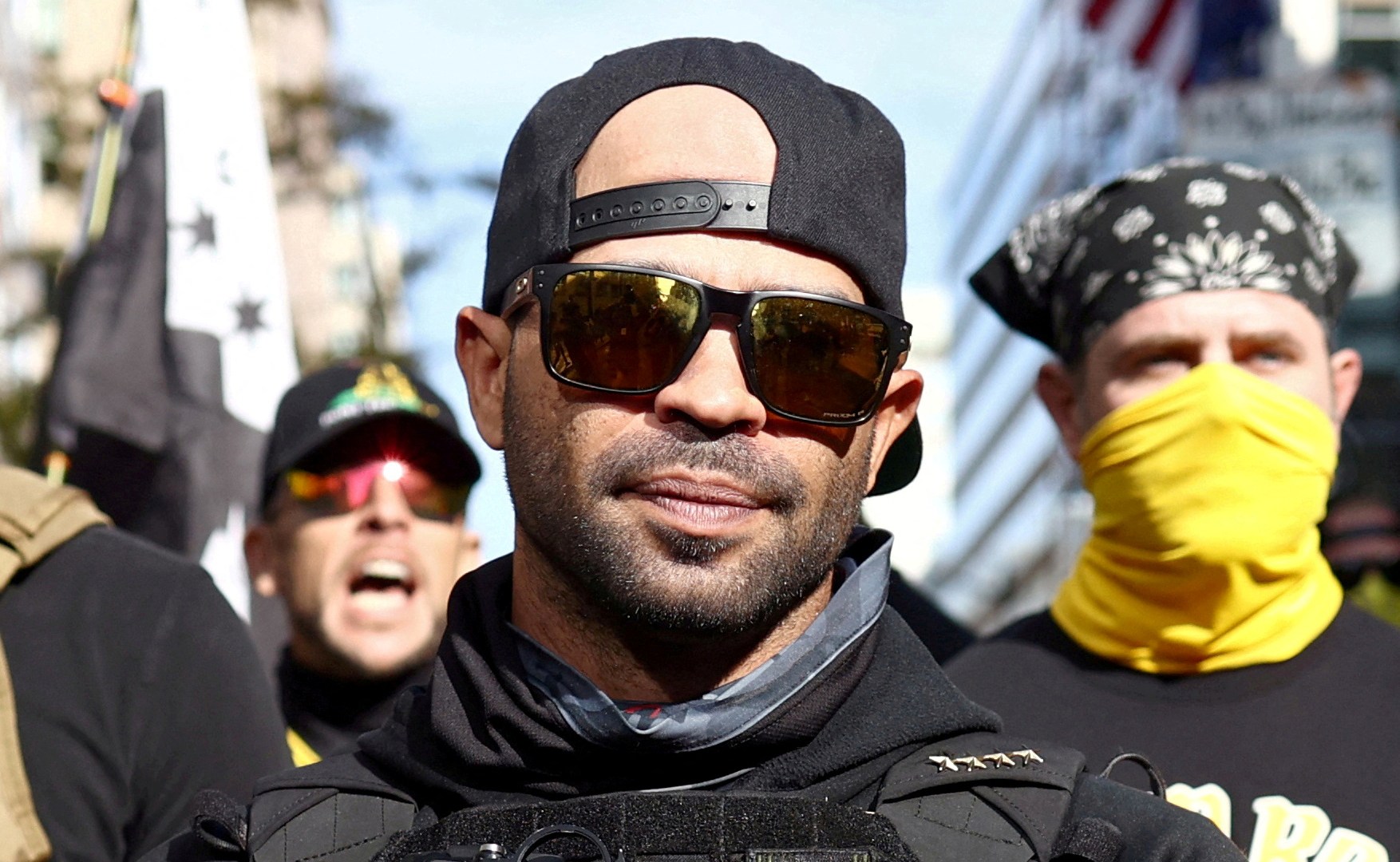 Former Proud Boys leader Enrique Tarrio and four lieutenants charged with seditious conspiracy in the Capitol attack “took aim at the heart” of United States democracy on January 6, 2021, a federal prosecutor told jurors as their high-profile trial opened in Washington.

Jurors began hearing opening statements on Thursday, more than two years after members of the far-right group joined a pro-Donald Trump mob in attacking the Capitol.

Assistant US Attorney Jason McCullough said the proud boys knew that the prospects of a second term in office for Trump were quickly fading as January 6 approached. So the group leaders assembled a “fighting force” to stop the transfer of power to Joe Biden, McCullough said.

Tarrio saw a Biden presidency as a “threat to the Proud Boys’ existence”, the prosecutor said.

“These men did not stand back. They didn’t stand by. Instead, they mobilized,” McCullough told jurors, invoking the words of Trump when he infamously told the Proud Boys to “stand back and stand by” during a 2020 presidential debate with Joe Biden.

The trial came on the heels of the seditious conspiracy convictions of two leaders of the Oath Keepers, another US far-right group. Several other Oath Keepers members were charged with plotting to stop the peaceful transfer of presidential power from Trump to Biden.

The case against Tarrio and his four associates is one of the most consequential to emerge from the January 6 riot at the Capitol, The trial will provide an in-depth look at a group that has become an influential force in mainstream Republican politics.

Defense lawyers have said there was never any plan to go into the Capitol or stop Congress’s certification of the electoral vote won by Biden.

“Over and over and over and over the government has been told by witnesses there was no plan for January 6,” said Nicholas Smith, attorney for Ethan Nordean, a Proud Boys chapter president from Auburn, Washington. Nordean went into the Capitol looking for friends and did not damage or hurt anyone there, he said.

The defense has also accused prosecutors of trying to silence potential defense witnesses. Tarrio’s lawyers have not said whether he will take the stand in his defense.

Tarrio’s other co-defendants are Joseph Biggs, of Ormond Beach, Florida, a self-described Proud Boys organizer; Zachary Rehl, who was president of the Proud Boys chapter in Philadelphia; and Dominic Pezzola, a Proud Boy member from Rochester, New York.

The Department of Justice has charged nearly 1,000 people across the US in relation to the deadly January 6 riot, and its investigation has continued to grow.

The Proud Boys’ trial is the first major trial to begin since the House committee investigating the insurrection urged the department to bring criminal charges against Trump and associates who were behind his efforts to overturn his 2020 election loss.

While the criminal referral has no real legal standing, it added to political pressure already on Attorney General Merrick Garland and the special counsel he appointed, Jack Smith, who was conducting an investigation into January 6 and Trump’s actions.

Jury selection in the case took two weeks as a slew of potential jurors said they associated the Proud Boys with hate groups or nationalistic whiteism,

The Capitol could be seen in the distance from parts of the court, where a second group of Oath Keepers were also on trial for seditious conspiracy, which carries up to 20 years behind bars upon conviction.

Tensions bubbled over at times as jury selection slowed to a crawl and defense lawyers complained that too many potential jurors were biased against the Proud Boys.

Defense lawyers challenged jurors who expressed support for causes such as Black Lives Mattersaying that could indicate prejudice against the Proud Boys.

Lawyers and the judge clashed during sometimes chaotic pretrial legal wrangling to the point where two defense lawyers threatened to withdraw from the case. US District Judge Timothy Kelly, a Trump appointee, lashed out after defense lawyers repeatedly interrupted and talked over him on Wednesday, warning that he would find them in contempt if it continued.

Tarrio, who is from Miami, was not in Washington on January 6 because he was arrested two days before the riot and charged with Vandalizing a Black Lives Matter banner at a historic Black church during a protest in December 2020. He was ordered to leave the capital, but prosecutors said he remained engaged in the far-right group’s planning for January 6.

Prosecutors were expected to tell jurors that as the Proud Boys’ anger about the election Grew, they also began to turn against the police over Tarrio’s arrest and over the failure to bring charges in the stabbing of another Proud Boy during clashes the month before the riot.

Communications cited in court papers show the Proud Boys discussing storming the Capitol in the days before the riots. On January 3, someone suggested in a group chat that the “main operating theater” be in front of the Capitol. “I didn’t hear this voice note until now, you want to storm the Capitol,” Tarrio said the next day in the same chat.

Tarrio’s lieutenants were part of the first wave of rioters to push onto Capitol grounds and charge past police barricades toward the building, according to prosecutors. Pezzola used a riot shield he stole from a Capitol Police officer to break a window, allowing the first rioters to enter the building, prosecutors alleged.

Prosecutors said Tarrio cheered on the actions of the Proud Boys on the ground as he watched from afar. “Do what must be done. #WeThePeople.” he wrote on social media as the riot unfolded. “Don’t [expletive] leave,” Tarrio wrote in another post.