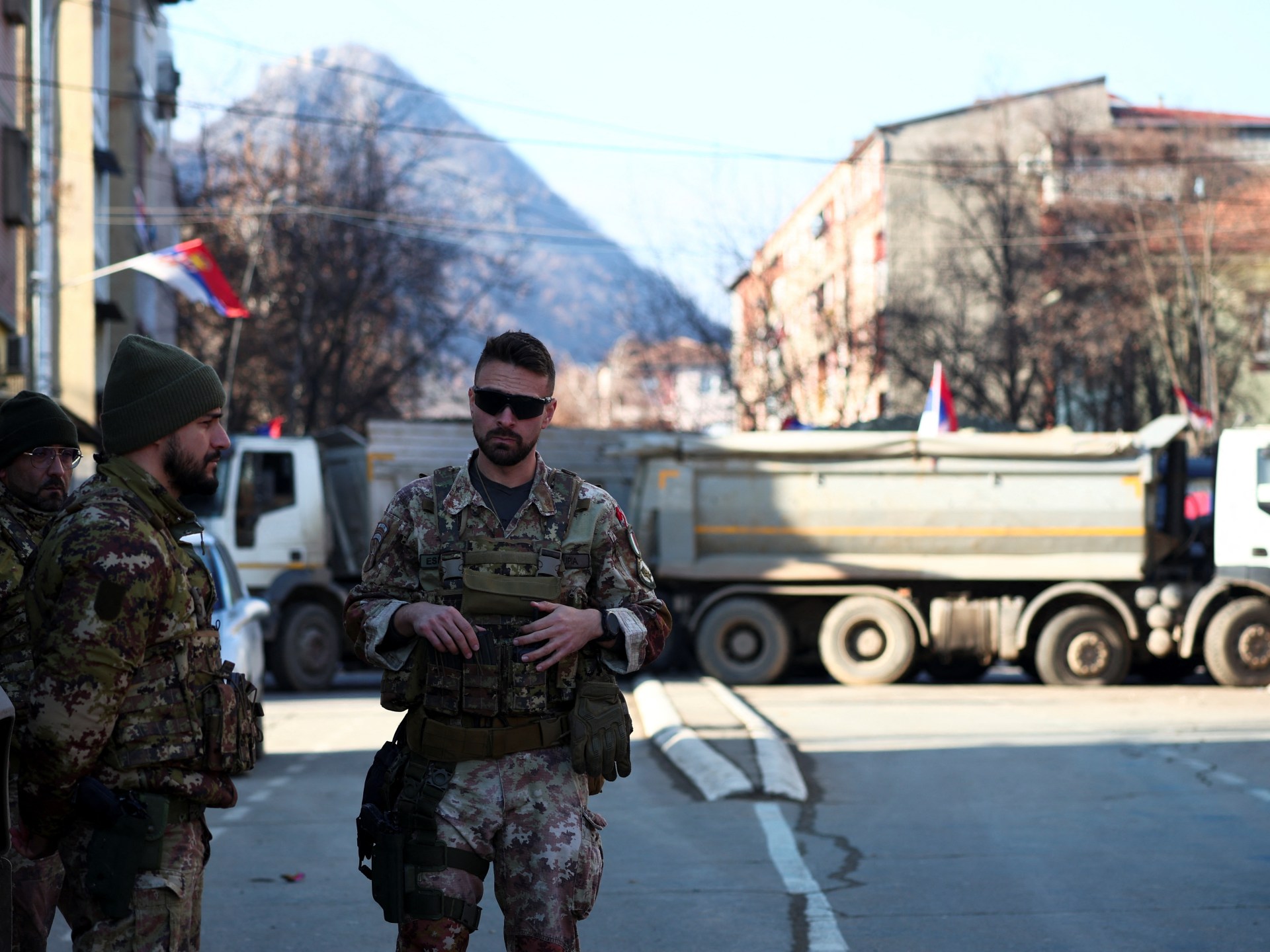 As 2022 winds down, the world is increasingly nervous about Kosovo and Serbia’s sabre-rattling further escalating as ethnic tensions in northern Kosovo continue to flare.

Serbia’s army put its troops on “highest level of combat readiness” six days after Prime Minister Ana Brnabic announced that tensions were “on the brink of armed conflict”.

On Thursday, there were some possible indicators of tensions cooling with Serbia’s President Aleksandar Vucic. Saying that ethnic Serbs in northern Kosovo have begun to take down some barricades, but the situation remains a source of significant concern.

In recent months, Kosovo Serbs have set up roadblocks in northern Kosovo, a longtime hotbed for ethnic tensions.

These ethnic Serbs, who account for about six percent of Kosovo’s population, have been protesting what they see as discrimination against them by the Pristina government.

The leadership in Belgrade accuses Kosovo’s government of plotting “terrorism against Serbs” in Serb-populated northern Kosovo.

The Serbian government and Kosovo Serbs in northern Kosovo do not recognize Kosovo’s independence, which the country gained in 2008. Kosovo’s Serb minority sees the ethnic Albanian police as an “occupying” force in northern Kosovo.

Officials in Pristina allege that Serbia seeks to capitalize on tensions in northern Kosovo to justify aggression against its former southern province.

From Pristina’s perspective, the roadblocks undermine freedom of movement in Kosovo, leading to the leadership in Pristina threatening actions if NATO’s peacekeeping force in Kosovo, KFOR, does not remove these barricades.

Pristina maintains that Serbia is responsible for “paramilitary formations”, which set up some of these roadblocks earlier this month.

“I have a hard time imagining such an armed conflict happening. Nevertheless, one should be worried,” Bodo Weber, senior associate of the Democratization Policy Council, told Al Jazeera.

“We see a lot of heightened rhetoric and threats, particularly from the Serbian side. Nevertheless, so far, what we have is three weeks of barricades, and minor violent incidents,” he said.

“I can’t imagine Serbia entering the north of Kosovo with either army or police, or both, because that would be a total violation of international law, on which Belgrade so much insists, and it would put Serbian forces in direct conflict with [KFOR]Weber added.

Serbia would gain nothing from making such dangerous escalator moves, according to Weber, who also said that Pristina’s threats to take down the barricades were “not helpful” in the midst of the tense situation.

KFOR has 4,000 troops on the ground in Kosovo. Ultimately, this NATO force constitutes the greatest deterrence against any Serbian military invasion or incursion into Kosovo.

“The chances of a full-fledged conflict are slim, but we said that about Russia invading Ukraine as well,” Kosovo-based journalist Xhemajl Rexha told Al Jazeera.

“President Vucic and Prime Minister Brnabic speak about conflict to rally support for Kosovo Serbs, in their continuous bid to hinder Kosovo’s statehood,” he said.

“An official request by the Belgrade government to allow some 1,000 army and police troops to go back to Kosovo is being shunned by NATO – and is something unimaginable to ever happen,” added Rexha.

As the situation in northern Kosovo remains hot, it is critical to take stock of how these tensions factor into Russia-West relations.

Since the late 1990s, Moscow has strongly backed Belgrade on the Kosovo file.

Sharing the Serbian government’s position that Kosovo is a breakaway southern province that belongs to the Serbian nation-state, Moscow’s stance against the West vis-à-vis Kosovo has made Russia a uniquely important partner for Belgrade.

Moscow has interests in seeing the Kosovo dispute remain unresolved. If Serbia were to recognize Kosovo’s independence and normalize relations with Pristina, Russia would cease to be so important to Serbia.

Within the context of the Ukraine conflict, rising levels of tension between Kosovo and Serbia serve the Kremlin’s interests.

This is mostly because of the ways in which this friction – or perhaps a potentially violent conflict – would serve to divert the West’s attention and resources away from Ukraine to deal with a crisis in Kosovo-Serbia relations.

“In case of war in the Balkans, which in my opinion is highly unlikely, Russia will strengthen its hand,” Dilek Kutuk, a PhD candidate and researcher on the Balkans, told Al Jazeera.

“It will distract the West’s attention from Ukraine. Russia will amplify its arguments to gain more legitimacy and show the world how fragile and messy the West is.

Despite KFOR serving as a deterrent to an all-out Serbian military incursion or operation in Kosovo, some analysts warn against dismissing the possibility of Russian President Vladimir Putin’s “little green men” (unmarked Russian soldiers used to annex Ukraine’s Crimea) being deployed to Kosovo. , bringing back memories of Russia’s 2014 covert invasion of Ukraine.

According to Kosovo’s Prime Minister Albin Kurti, the Wagner Group has arrived in Serbia amid rising tensions between Belgrade and Pristina.

The entity is a Russian mercenary force that advances Moscow’s military interests in foreign countries despite presenting itself as a private company.

Earlier this month, the Wagner Group announced the opening of a “friendship and cooperation centre” in the Serbian capital with the aim of bolstering the Moscow-Belgrade partnership through soft power means.

“Serbia is not acting on its own. Vucic, who was Milosevic’s chief propagandist, has close ties with Russia,” David L Phillips, the director of the program on peacebuilding and human rights at Columbia University, told Al Jazeera. Phillips served as a senior adviser and foreign affairs expert at the US State Department during the Bill Clinton, George Bush, and Barack Obama administrations.

“Putin wants to delegitimise and dismantle Kosovo, which he views as a US project. Since Russia’s armed forces are overstretched and incompetent, Putin may turn to the Wagner Group. The Wagner Group has proved to be a reliable alternative to Moscow in the past,” he said.

However, the Wagner Group could only wage a covert invasion of Kosovo if authorities in Belgrade would permit the mercenary force to do so – a scenario that some experts doubt would unfold because they assess that Vucic would not take such high risks.

Mindful of the fact that Serbia, an EU candidate since 2012, has deep economic links to Germany and other Western countries, permitting the Wagner Group to wage operations in Kosovo would be a serious gamble.

“Seeing a member of ultra-right extremists from Serbia on the barricades with some Wagner insignia, and who is known to have visited [the Wagner headquarters] in Russia a month before, is a clear provocation,” said Weber.

“But it’s a well-dosed one. In Serbia, the extreme right is knowingly under full control of the Vucic regime, and no Wagner members could enter the country without the approval of the regime. And I don’t see why Vucic should give up his long-pursued policy of balancing between West and East.”