In ‘market of hate’, a Congress leader’s march to ‘unite India’ 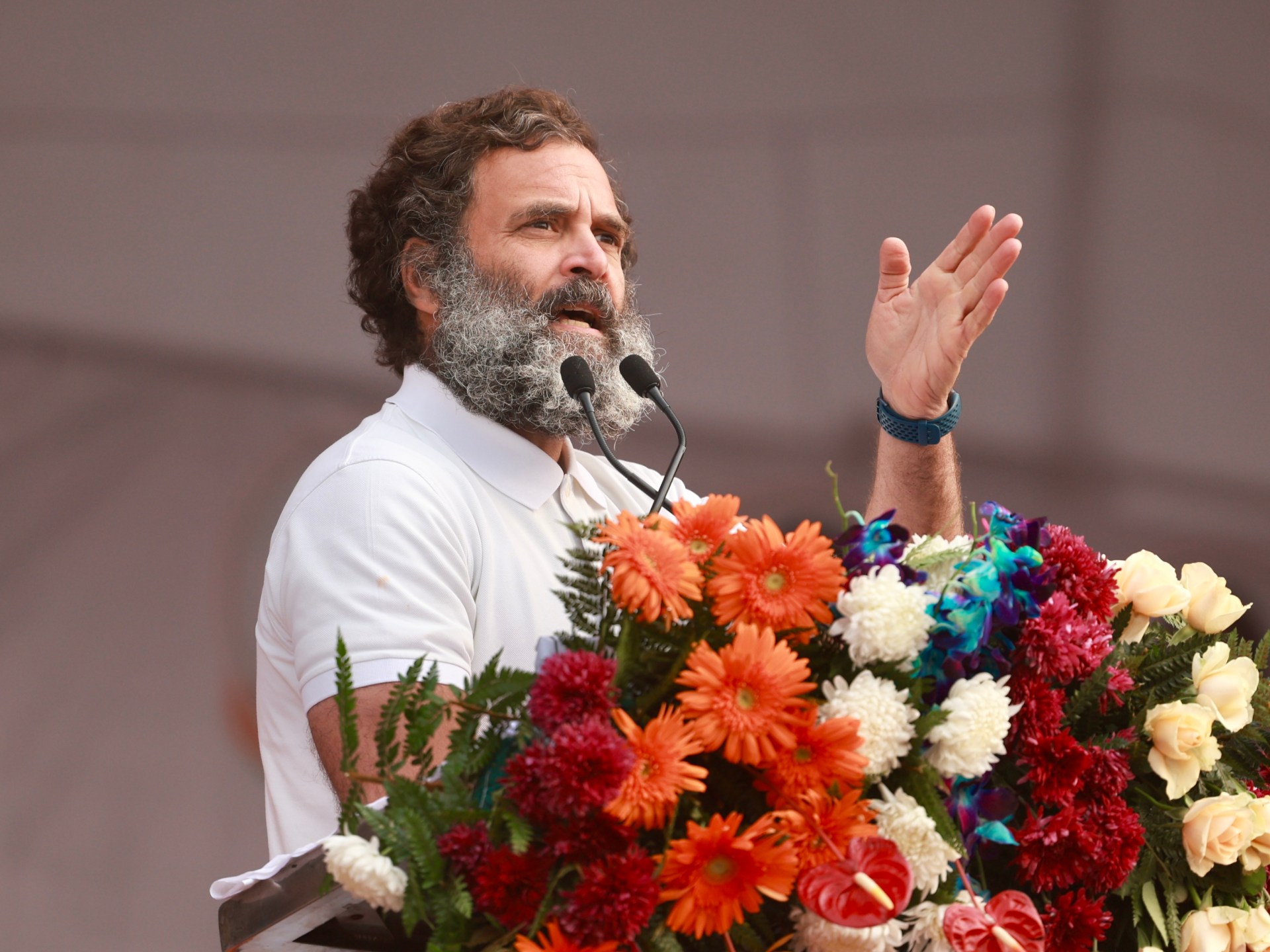 Thousands of his supporters thronged the streets of Karnal – a city in Haryana state, a three-hour drive north of the Indian capital New Delhi – as the Gandhi scion entered the last leg of the march after passing through the politically important states of Uttar Pradesh and delhi.

Experts say Gandhi’s march is an effort to revive the electoral fortunes of the Grand Old Party, which dominated India’s politics for decades.

The Congress party, which spearheaded India’s anti-colonial struggle, has been relegated to the margins of Indian politics since the rise of the Hindu nationalist Bharatiya Janata Party (BJP) of Prime Minister Narendra Modi.

The march which kicked off in the southern city of Kanyakumari in mid-September, will conclude on January 30 in Sri Nagar, the main city of Indian-administered Kashmir.

The nearly 4,000km (2,500-mile) yatra covering 12 states has been dubbed the largest mass contact program undertaken by the party. Rahul Gandhi, three members of whose family have been prime ministers, launched it, accusing the Modi government of throttling the opposition voice in parliament and media.

The 52-year-old leader has highlighted rising prices, farmers’ issues, record unemployment and rising attacks against minorities in the multi-faith country of 1.3 billion people.

“Hindu-Muslim hatred is being spread 24-7 to divert your attention from real issues,” Gandhi said in his speech at the Mughal-era Red Fort in the Indian capital on December 24.

“Main nafrat ke bazaar mein mohabat ki dukan lagane aaya hun,” (In the market of hate I am setting up a shop of love) Gandhi said on December 19 at Alwar in Rajasthan state.

Senior Congress party leader Kamal Nath said Rahul Gandhi was forced to hit the road due to the authoritarian style of Modi’s rule. He used the slogan “Vyawastha Modi hai, media godi hai aur janta ro di hai,” (The establishment is Modi, media is in the lap of the establishment and the people are crying) to describe the state of affairs in the country.

“The kind of response we are seeing is extremely heart-warming,” said Kamal Nath, a former Union minister and chief minister of Madhya Pradesh state.

“I have never seen such affection and faith in the eyes of the people in my long political career as I saw during the Madhya Pradesh leg of Rahul Gandhi’s yatra,” he told Al Jazeera.

In Karnal, Satyendra Chaudhry, a farmer, compared the march to the famous Salt March led by India’s independence icon Mahatma Gandhi in 1930.

“This yatra will be a gamechanger,” he told Al Jazeera. People who joined the yatra in Haryana praised Gandhi for raising issues facing common people.

“He is raising the real issues – communal harmony, unemployment and price rise are the issues concerning us,” Yash Shrivastava, who came from Uttar Pradesh to participate in the yatra, told Al Jazeera.

Communal harmony has been a cause of concern since Modi. took office in 2014. His government’s legislative agenda, such as the controversial citizenship register, critics say, has targeted Muslims while Hindu far-right groups have increased attacks on minorities, particularly Muslims.

Will this walk achieve its stated objective? We don’t have any parameters to judge.

If we judge by the people’s response, the march can be called successful. But will this translate into votes in the 2024 general elections?

Gandhi repeatedly raised issues such as inflation and joblessness, which concern the masses.

By the size of the march in Karnal, it seems he has succeeded in galvanizing the party cadres. But senior BJP leader Sudhanshu Mittal said the yatra “in both the stated and unstated objective” has failed.

“It is just a roadshow of the Congress, by the Congress and for the Congress. India has nothing to do with it,” he told Al Jazeera. Taking a potshot at the Congress leader, Mittal said the yatra was a ploy to relaunch the Gandhi scion.

“This is the nth number at relaunching a product which has not worked in many forms,” ​​he told Al Jazeera, referring to Gandhi’s failure to lead the Congress party to victory in the last two elections. He also questioned Gandhi’s claims on rising hatred in the country.

“He claimed BJP is spreading hate and that he traveled entire country but could not find any hate.”

The yatra, which will now head to the northern state of Punjab, has generated a lot of buzz, with Gandhi sporting a new beard and walking in a T-shirt in extremely cold weather, making him the center of social media gossip.

As the Karnal rally was coming to an end, a group of enthusiastic supporters tried to make their point heard amid the cacophony of the crowd.

A young Sikh man said: “Sura soi pehachaniye jo lade deen k heth,” (Brave is who fights for the underprivileged) suggesting that Gandhi is fighting for the poor.

Another youth borrowed a line from superstar Shah Rukh Khan’s dialogue from his latest film, Pathan, scheduled to be released soon.