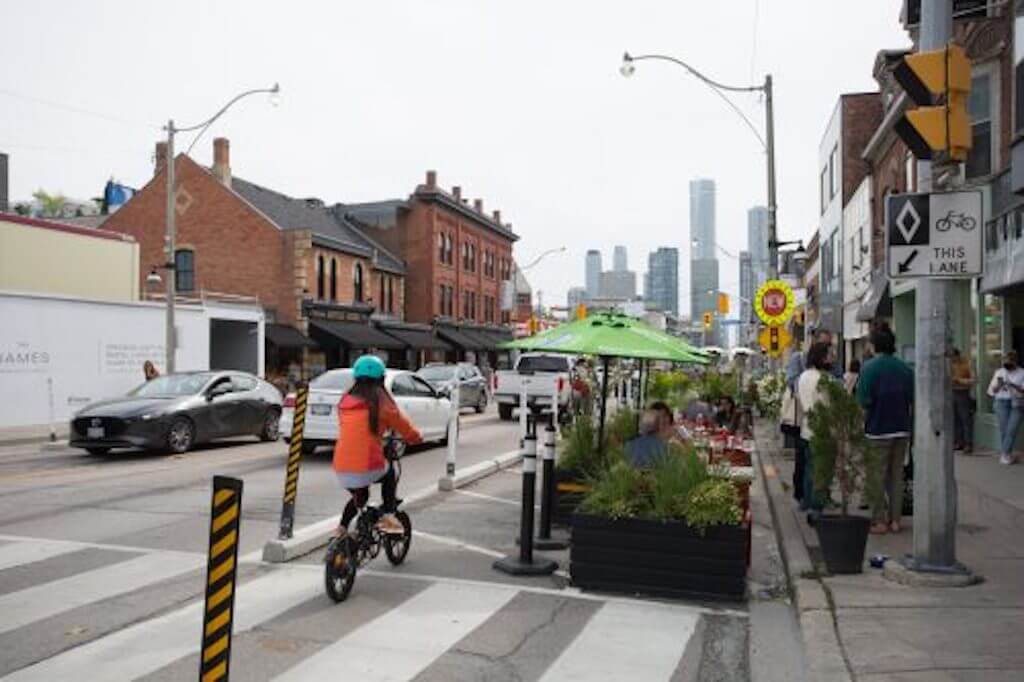 The COVID-19 pandemic focused attention on the importance of public space, bike expansion and street equity. Cities around the world carved out more space for people and for bicycles. And, in so doing, ushered in a bicycle boom. Now, as pandemic measures have eased and life is more-or-less back to normal, some cities are moving to make that new safe cycling infrastructure permanent. Here are three examples:

Canada’s largest city, Toronto, doesn’t have the best reputation when it comes to cycling, but it did initiate several good programs for residents to get outside during the pandemic, including an expansion of safe cycling infrastructure in numerous areas. The municipality carved out separated bike lanes on a number of streets, but none quite as symbolically important as the lanes on either side of Yonge, the city’s best-known street and one of the main north-south corridors in and out of the downtown area .

According to the city report, cycling and pedestrian traffic is up. Of course they are. It’s a direct well-traveled route downtown. Build it and they will come, isn’t that the thing?

“After 18 months of installation, the data demonstrates increases (ranging between 57 percent and 250 percent) in cycling trips and increases in pedestrian trips (ranging between 59 percent and 145 percent) on the corridor, as well as support for local business including an increase from 10 CaféTO patios in 2020 to 21 patios on the corridor in 2022,” the report read.

Like most projects of this nature, acceptance and appreciation was not universal. There are petitions on either side of the issue.

Prior to these two projects, in December 2021 the city also made permanent seven temporary bike expansion projects that were installed in 2020 early in the pandemic. So, maybe Toronto is getting its act together. Let’s hope so.

In the spring of 2020, as a response to the growing pandemic, San Francisco created a car-free space in Golden Gate Park along John F. Kennedy Drive for people to walk and bike safely.

It’s only 1.5 miles, but this is the third most visited park in America, and something for which the San Francisco Bicycle Coalition had been lobbying for decades. So, they weren’t about to waste the opportunity.

When it came time to consider making the new car-free promenade permanent, SFBC got to work convincing anyone and everyone that the city needed this to stay. And they did it. The city made John F. Kennedy Drive car-free for good.

“I think the San Francisco Bicycle Coalition started on this back when we were a very grassroots organization, meaning maybe there were five people 40 years ago. But you know, it started before that, in the 70s for people to use JFK for rollerskating,” says Janelle Wong, executive director of SFBC. “So this has been decades in the making, and we’ve gotten little pieces over the years.”

Wong explains that the first win was Sunday road closures for six months of the year, then 12 months, then Saturdays were added and so on. And this was decades ago.

“We’ve always wanted it to be closed to cars,” she adds. “I think as an organization, I think as a membership, we’ve always wanted that one-and-a-half-mile stretch of road to be a people-first space. And I think that the emergency order shutting it down, I think for the first time allowed people to see what seven days a week, 24 hours a day closing that street looks like and what it feels like.”

Yes, the French capital is currently enjoying a cycling renaissance the likes of which haven’t been seen since Copenhagen. What really caught the imagination of the city, indeed the world, was the closing of Rue de Rivoli to car traffic entirely at the onset of the pandemic.

This was a big deal. Not a side street, not a street parallel to a larger one, this is an iconic east-west thoroughfare that runs from the Louvre straight across the center of town. And, it was all bicycles all the time.

In 2021, one lane of traffic for transit, emergency vehicles and the like was added back and the new configuration is now permanent. The move, like Toronto, wasn’t without its share of detractors complaining about traffic jams, but it seems that is the price to pay for progress. Growing pains. Especially when such a high-profile and historic stretch of asphalt is involved.

With the move, Paris solidified its place as a city leading the urban response to the bicycle boom, which proved infectious with many other major cities around the world making active transportation a priority.