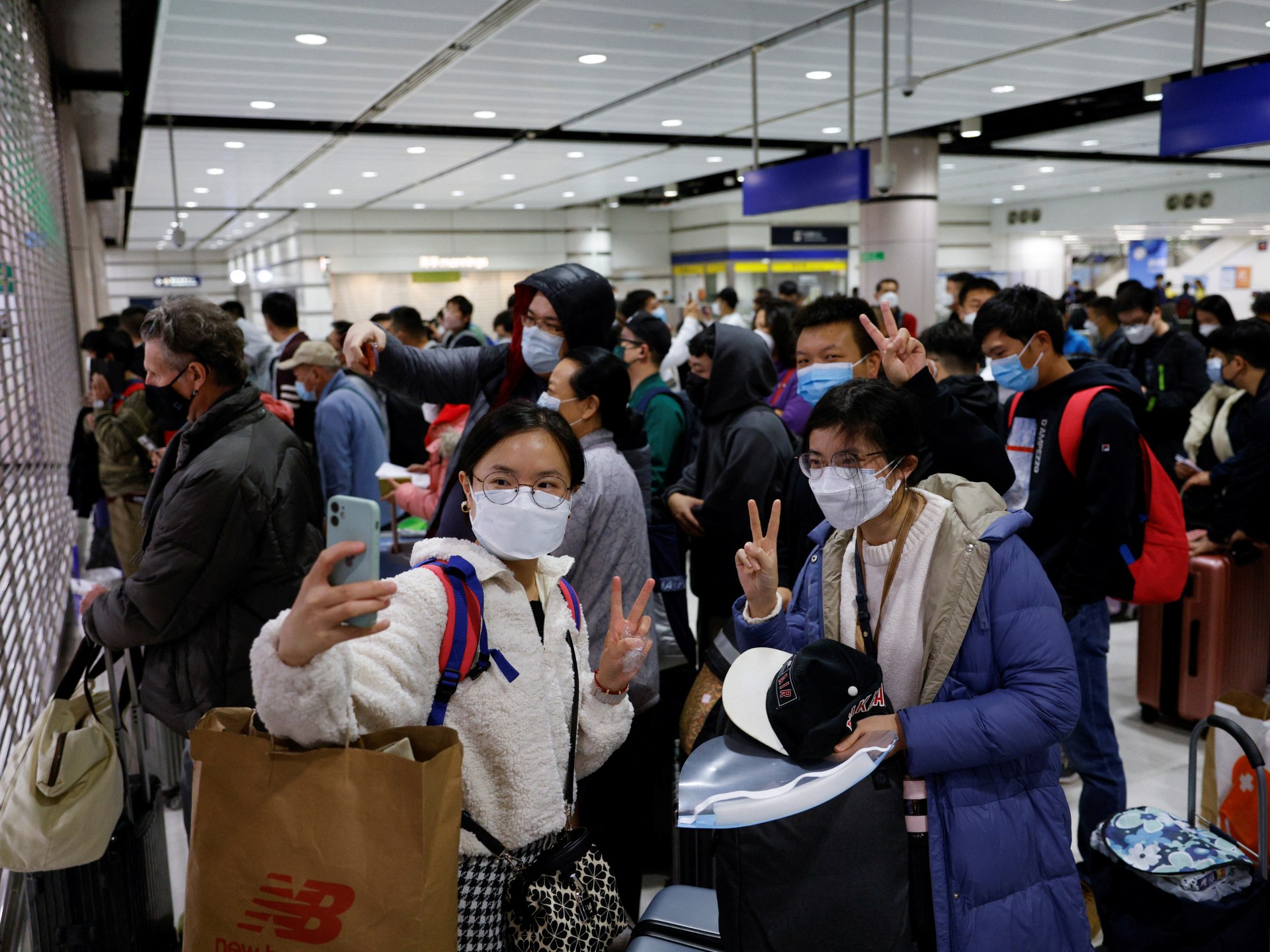 China has lifted pandemic restrictions on foreign travel, ending quarantine requirements for inbound travelers and with it, nearly three years of self-imposed isolation.

The first passengers to arrive under the new rules landed at airports in the southern cities of Guangzhou and Shenzhen just after midnight on Sunday, according to the state-owned China Global Television Network (CGTN).

The 387 passengers on board flights from Singapore and Canada’s Toronto were not subject to COVID-19 tests upon arrival and did not have to undergo five days of quarantine at centralized government facilities, it reported.

The easing of curbs on foreign travel marks the final unraveling of China’s strict “zero-COVID” policy.

Beijing began dismantling the hardline strategy of mandatory quarantines, grueling lockdowns and frequent testing following historic protests against the curbs lastmonth. But the abrupt changes have exposed many of its 1.4 billion population to the virus for the first time, triggering a wave of infections that is overwhelming some hospitals, emptying pharmacy shelves of medicines, and causing long lines to form at crematoriums.

The lifting of quarantine rules effectively opens the door for many Chinese to go abroad for the first time since borders slammed shut nearly three years ago, without fear of having to isolate at government facilities upon their return.

China’s borders remain closed to tourists, however, with foreigners only allowed to travel to the country for business or family visits.

Al Jazeera’s Katrina Yu, reporting from Beijing, said that for many people in China, Sunday marked “the real end of the ‘zero-COVID’ policy”.

“That’s because, before today, it was impossible to leave and enter China without having to undergo quarantine at government facilities and at home. So people feel very excited and quite liberated to go and travel outside the country,” she said. “Popular travel sites say searches for outbound flights have jumped by about 80 percent compared with this time last year, and the favorite destination was Thailand. Others include Japan, South Korea, the US and Australia,” she added.

But the expected surge in visitors has led more than a dozen countries to impose mandatory COVID-19 tests on travelers from China, citing concerns over Beijing’s “under-representation” of infections and deaths from the disease, as well as the potential for the emergence of new and more virulent subvariants of the coronavirus.

Despite the testing requirements, 28-year-old Zhang Kai told the AFP news agency he is planning a trip to either South Korea or Japan.

Friends of his have already landed in Japan and undergone tests, he said, dismissing the testing requirement as a “small matter”.

In Tokyo, caricaturist Masashi Higashitani said he was thrilled about China’s reopening and was dusting off his Chinese language skills to prepare for more holidaymakers. But he admitted some apprehension.

“I wonder if an influx of too many of them might overwhelm our capacity. I’m also worried that we need to be more careful about anti-virus measures,” he told AFP.

Experts say while concerns about travelers from China were understandable, given the scale of the outbreak in the country, the likelihood of Chinese passengers causing a spike in infections in the countries they visit was minimal.

“People have reason to be concerned about the high volume of travelers from China,” said Yanzhong Huang, a senior fellow for global health at the Council on Foreign Relations, a United States-based think tank.

“But I don’t think it’s reasonable to view these passengers as diseased or dangerous,” he told Al Jazeera. “So far, there is no evidence of emerging new subvariants from China. And given that most of these destination countries have learned to exist with the virus, the influx of the Chinese visitors is not going to lead to a spike in cases in those countries.”

The lifting of curbs on overseas travel comes as China also marks Chunyun, the 40-day period of Lunar New Year travel, with millions of people expected to travel from cities hard-hit by COVID to the countryside to visit their relatives, including vulnerable older family members.

This Lunar New Year public holiday, which officially runs from January 21, will be the first since 2020 without domestic travel restrictions.

The Ministry of Transport said on Friday that it expects more than 2 billion passenger trips over the next 40 days, an increase of 99.5 percent year-on-year and reaching 70.3 percent of trip numbers in 2019.

There was mixed reaction online to that news, with some comments hailing the freedom to return to hometowns and celebrate the Lunar New Year with family for the first time in years.

Many others, however, said they would not travel this year, with the worry of infecting elderly relatives a common theme.

“I dare not go back to my hometown, for fear of bringing the poison back,” one person wrote on the microblogging site Weibo.

There are widespread concerns that the great migration of workers from cities to their hometowns will cause a surge in infections in smaller towns and rural areas that are less well-equipped with intensive care unit (ICU) beds and ventilators to deal with them.

“It’s necessary to provide convenient services, accelerate vaccination for the elderly in rural areas and the construction of grassroots lines of defence.”

Some analysts are now saying the current wave of infections may have already peaked.

Ernan Cui, an analyst at Gavekal Dragonomics in Beijing, cited several online surveys as indicating that rural areas were already more widely exposed to COVID infections than initially thought, with an infection peak having already been reached in most regions, noting there was “not much difference between urban and rural areas”.

Sunday also saw a relaxation of cross-border travel restrictions between the Chinese mainland and the semi-autonomous city of Hong Kong.

Up to 50,000 Hong Kong residents will be able to cross the border daily at three land checkpoints after registering online, and another 10,000 will be allowed to enter by sea, air or bridge without needing to register in advance.

More than 410,000 in total had registered to make the journey by Saturday, public broadcaster RTHK reported.

Jillian Xin, who has three children and lives in Hong Kong, said she was “incredibly excited” about the border opening, especially as it means seeing family in Beijing more easily.

“For us, the border opening means my kids can finally meet their grandparents for the first time since the pandemic began,” she told the Reuters news agency. “Two of our children have never been able to see their grandfather, so we cannot wait for them to meet.”

Teresa Chow, another Hong Kong resident, said she was planning to go visit her hometown in the eastern city of Ningbo.

“I’m so happy, so happy, so excited. I haven’t seen my parents for many years,” she said as she and dozens of other travelers prepared to cross into mainland China from Hong Kong’s Lok Ma Chau checkpoint early on Sunday.

“My parents are not in good health, and I couldn’t go back to see them even when they had colon cancer, so I’m really happy to go back and see them now,” she added.