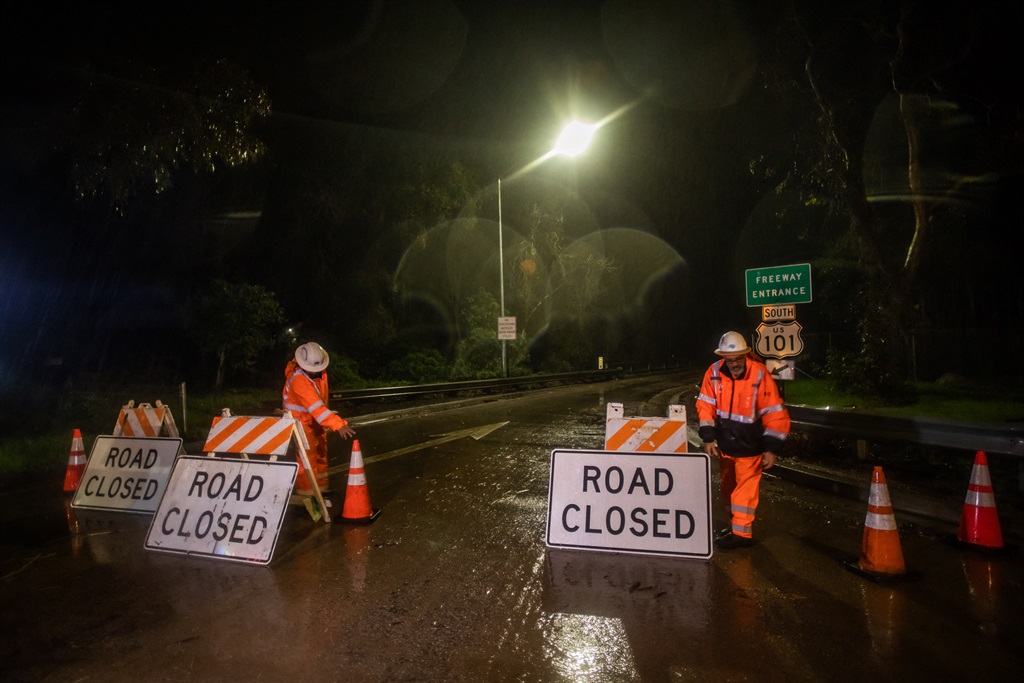 A California town that is home to Britain’s Prince Harry and wife Meghan Markle was ordered evacuated on Monday, with firefighters warning mudslides could engulf homes.

Montecito, a town of about 9 000 people that is also a favorite of American entertainment royalty such as Oprah Winfrey and Jennifer Aniston, was expected to get up to eight inches (20 centimeters) of rain in 24 hours – on hillsides already sodden by weeks of downpours.

Emergency authorities in the city, which lies 90 minutes from Los Angeles, said anyone in the area should get out.

An AFP reporter said police roadblocks had been set up to prevent people from getting into the town, where several roads were flooded.

Residents could be seen leaving the area, but power remained on and at least one store was still open late Monday.

Montecito, whose multimillion-dollar properties are perched in the breathtaking California countryside, is particularly vulnerable to mudslides because it sits at the foot of a mountain range that was ravaged by fire five years ago.

Hundreds of square miles (kilometres) of land were scorched in 2017 and 2018, denuding the hillsides of the vegetation that normally keeps soil in place.

Monday’s evacuation order came five years to the day after heavy rain had sent torrents of mud into the town, killing 23 people.

Over the last 30 days, Montecito has received 12-20+ inches of rain across the community, exceeding our annual average of 17 inches.

“This cumulative, saturating rain puts the community at greater risk of flooding and debris flow.”

Former talk show host Ellen DeGeneres posted a video on Twitter of a raging creek near her home.

“This is crazy,” she told followers. “It’s probably about nine feet up, and it’s going to go another two feet.”

The town is also home to several other high-profile entertainers, including Gwyneth Paltrow, Katy Perry, Rob Lowe and Larry David.

Spokespeople for the Duke and Duchess of Sussex did not respond to a request for comment.

The evacuation order in Montecito came as California was being lashed by the latest in a parade of storms that have already killed 12 people.

A swathe of the Golden State was under flood warnings as it struggled to cope with yet more rain on top of near-record downpours in recent weeks – with even more forecast over the coming days.

Two major episodes of heavy rain and heavy mountain snow are expected to impact California in quick succession during the next couple of days in association with two of the more energetic and moisture-laden parade of cyclones that are aiming directly for.

Up to five inches of rain could fall throughout Monday in coastal regions of central California, the NWS said.

More rain will follow on Tuesday, while the Sierra Nevada mountains could get hit with up to six feet (1.8 meters) of snow, making for hazardous conditions.

Last week he declared a state of emergency and on Sunday was granted a presidential emergency declaration.

“We expect to see the worst of it still ahead of us,” Newsom told reporters.

Almost 80,000 homes were without power in the state on Monday.

While heavy rain is not unusual for California during the winter, these downpours are testing the state.

They come as much of the western US is more than two decades into a punishing drought that has seen a large increase in the frequency and intensity of wildfires.

Scientists say human-caused climate change, brought about by the unchecked burning of fossil fuels, has supercharged these wild swings in weather, making droughts more severe and rainfall more intense when it does occur.

Even the recent heavy rains have not been enough to reverse the drought.

Scientists say several years of above-average rainfall are needed to get reservoirs back to healthy levels.