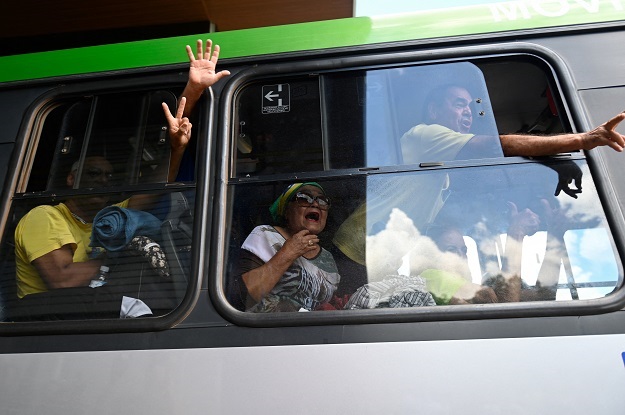 A group of supporters of Brazil’s Jair Bolsonaro, who had been arrested after rioting, gesture from inside a bus while leaving police headquarters in Brasilia.

Brazilian Senator Flavio Bolsonaro, son of former President Jair Bolsonaro, said on Tuesday people should not try to link his father to riots that stormed Brasilia earlier this week, when supporters of the far-right leader invaded the country’s Congress, presidential palace and Supreme Court. .

“Don’t try to create a narrative of lies as if Bolsonaro had any connection with these irresponsible acts,” Flavio said during a Senate session. “Since the election results he’s been silent, licking his wounds, virtually incommunicado”.

Meanwhile, the Brazilian senate approved federal intervention into the riots.

Also on Tuesday Brazilian police were questioning some 1 000 protesters held in an overcrowded gymnasium in the capital after anti-government mobs sacked public buildings over the weekend, as the country’s new government worked to overcome the crisis.

Most were believed to be supporters of Bolsonaro. They were detained on Monday as troops dismantled a camp in Brasilia where demonstrators set off on Sunday before storming Brazil’s Congress, Supreme Court and presidential palace.

Protesters at the camp outside army headquarters called for a military coup to overturn the result of the October election in which leftist President Luiz Inacio Lula da Silva narrowly defeated Bolsonaro, who made baseless suggestions of a rigged election.

Supreme Court Justice Alexandre de Moraes, who is running investigations of the “anti-democratic” protests, vowed in a speech on Tuesday to combat the “terrorists” at work in Brasilia.

“Democracy will prevail and Brazilian institutions will not bend,” said Moraes at the swearing-in of a new head of the federal police.

Yet the challenge of carrying out such an enormous criminal investigation into a loosely organized protest movement in the first weeks of a new government was already beginning to show.

Roughly 1 000 detainees from the protest camp were held for questioning at a police gymnasium where they slept on the ground, some wrapped in Brazilian flags, and complained to a Reuters journalist that they were being held indefinitely and poorly fed. They sang and took selfies with their phones, videos posted on social media showed.

Around 200 other demonstrators were under arrest and awaiting charges in a penal facility for their role in Sunday’s rampage that vandalized some of the capital’s most iconic buildings in the worst attack on Brazilian democracy in decades.

Lula, who took office on January 1, met on Monday night with the head of the Supreme Court, congressional leaders and state governors in a show of national unity to condemn the riots. They visited the ransacked Supreme Court building, which was the site most damaged by the pro-Bolsonaro rioters.

The former president was admitted on Monday to hospital in Florida where he flew 48 hours before his term ended. He told CNN Brasil on Tuesday that he may cut short his stay there due to his medical issues and return to Brazil before the end of the month.