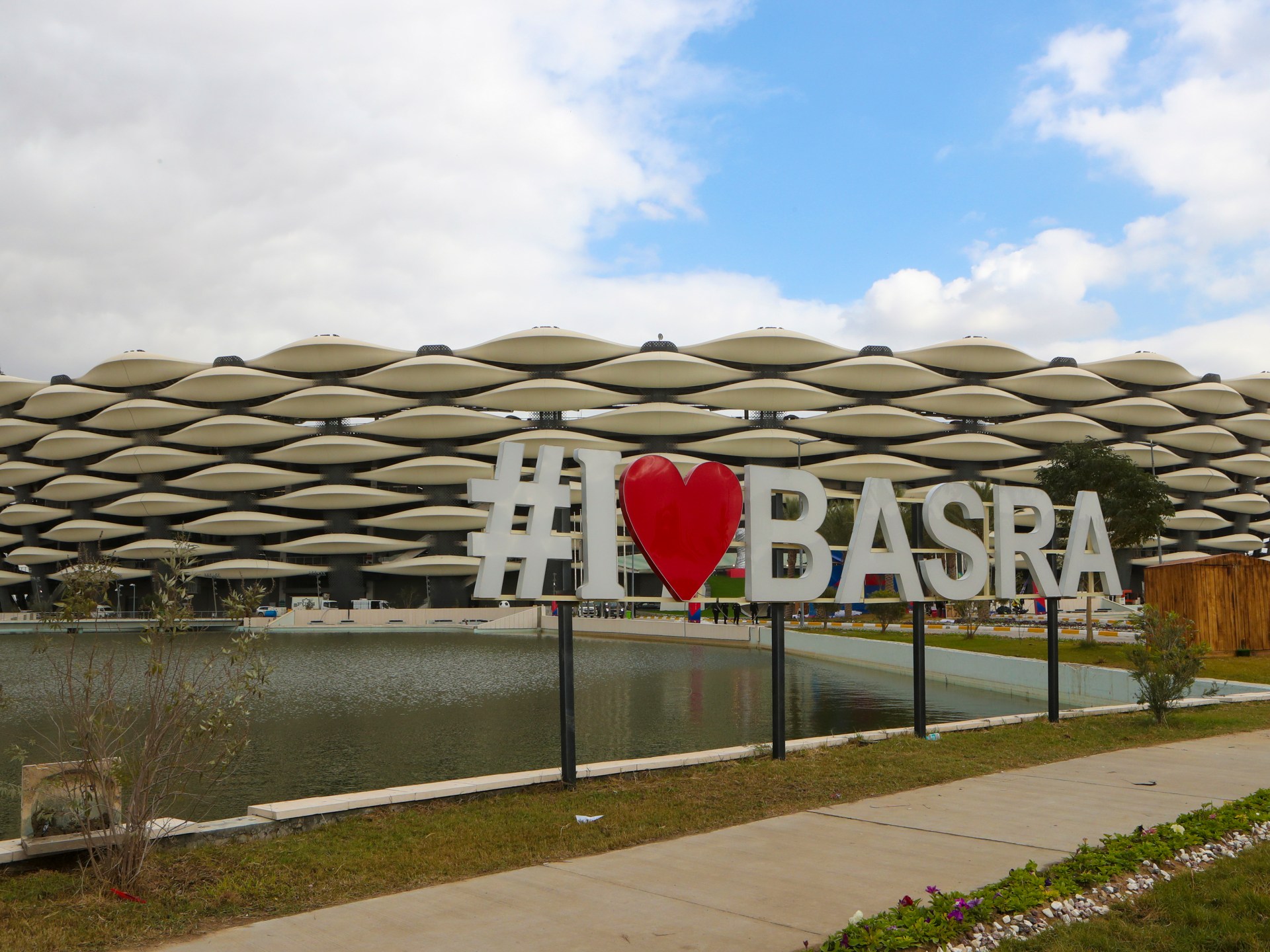 Basra, Iraq A few hours ahead of the opening match of the 25th edition of the Arabian Gulf Cup in Iraq’s southern port city of Basra, thousands of Iraqis have already headed towards the city’s Basra International Stadium.

The opening matches of the football tournament Iraq against Oman at 7pm local time (16:00 GMT), followed by Saudi Arabia against Yemen in the same stadium.

It is the second time Iraq is hosting the tournament, which has been held since 1970. Iraq’s record is strong – despite only participating for the first time in 1976, and being banned from the tournament from 1992 until the 2004 edition for political reasons, it has won the cup three times and finished as runners-up twice.

Iraqis have arrived from across the country, buoyed by the success of the World Cup in nearby Qatar, and by a rare sporting tournament being held in their country. Many wore clothes adorned with the Iraqi flag, and the slogan for the tournament: “Gulf25 is Basrawi”.

Ahmed Mustafa, a 28-year-old resident, is excited that the tournament is about to get under way, providing an opportunity for Iraq to shed the negative image often attached to it as a result of years of war and civil unrest,

“I am so happy that Iraq and my city Basra are going to host such a great sporting festival. It is a good opportunity to show that Iraq is peaceful, and that Iraqis are happy to meet people from other nationalities and let them enjoy their time in our city, to know our culture, customs and taste our food,” Mustafa told Al Jazeera.

“It’s not just about the football, it’s also good for tourism in the city and the whole country,” Mustafa added.

The tournament’s organizers have said that the city has finished all the necessary preparations, and is ready for the tournament to kick off later this evening.

Thousands of young Iraqis have also volunteered to help with the organization.

“It is a historic moment for Basra city and its people, as they welcome people from the Arabian Gulf countries,” said Basra’s Governor Asaad al-Eidani on Thursday.

Eight regional countries will be participating in the tournament, which will end on January 19. Aside from Iraq, they are tournament holders Bahrain, as well as Saudi Arabia, Qatar, the United Arab Emirates, Kuwait, Oman and Yemen.

The teams are split into two groups of four, with the top two sides from each group continuing to the semifinals.

The competition has attracted Iraqis from across the country to visit Basra.

“I came with four of my friends to attend all the matches,” said the 24-year-old. “I can’t describe how happy I am … ​​What is nice is that we will get to see many famous Iraqi singers perform at the opening match in Basra International Stadium.

“As Iraqis, all we want is to be happy, and enjoy ourselves,” al-Daraj added. “It is a good chance to get to know the culture of a different city, and show the world that Iraqis are united, regardless of their differences.”

San Karwan came even further, from Sulaimaniyah, in the Kurdish region of northern Iraq. It was his first time in southern Iraq.

“I am very happy to attend [this tournament] in Basra, and I have felt safe and comfortable since I arrived yesterday,” Karwan said. “As Kurds, we have suffered for decades, but we’re happy that this Gulf tournament can take place on Iraqi soil in Basra.

“The Arabian Gulf Cup is important for all Iraqis, because one of the best ways of transmitting your culture and civilization is through hosting tournaments and competitions, as we saw in Qatar’s organization of the 2022 World Cup,” Karwan added.

According to the organisers, the opening ceremony will feature a show that reflects the heritage and history of Basra, and its relationship with the rest of the Gulf.

Iraq was well integrated with its neighbors until the country, then led by Saddam Hussein, invaded Kuwait in 1990. The Iraqi occupation of Kuwait ended in 1991 after the United States-led Gulf War, where Iraq was opposed by regional powerhouses such as Saudi Arabia. .

The aftermath of the war led to the regional and international isolation of Iraq, which did not end until after Hussein’s overthrow by the US during the 2003 Iraq War.

Since then Iraq has suffered from sectarian civil war, political strife and violence and the rise of ISIL (ISIS), which for a time occupied large portions of the north and west of the country, almost reaching Baghdad at its height.

The Gulf Cup in Basra is therefore seen as an opportunity to showcase that Iraq has returned to the regional stage, and that things are improving, even as the country’s political turmoil rumbles on.

“This is the first big event [Iraq has hosted] for dozens of years, so this is a great experience, and what we have seen is that the locals are very happy and friendly, and they want to show their best to the world,” said Olga Laeva, a media operations manager with the Gulf Cup organizing body.

“Both the Basra International Stadium and the al-Mina’a Stadium [where some of the matches will take place] are ready and look good,” Laeva said.

College student Sajad Sabeeh is ready for the games on Friday evening.

,I’ve bought tickets For myself and for my family, there are no words to express how I feel and my happiness at seeing Iraqis and people from the Gulf from different backgrounds uniting together, singing, dancing and having fun,” the 21-year-old said.

While he complained about the high prices ticket touts were charging, Sabeeh said he ultimately felt that the tournament was a positive sign of Iraq’s re-emergence.

“I hope to see my country return to what it once was, a tourist destination for all Arabs and foreigners, even if the wars and insecurity isolate us.”