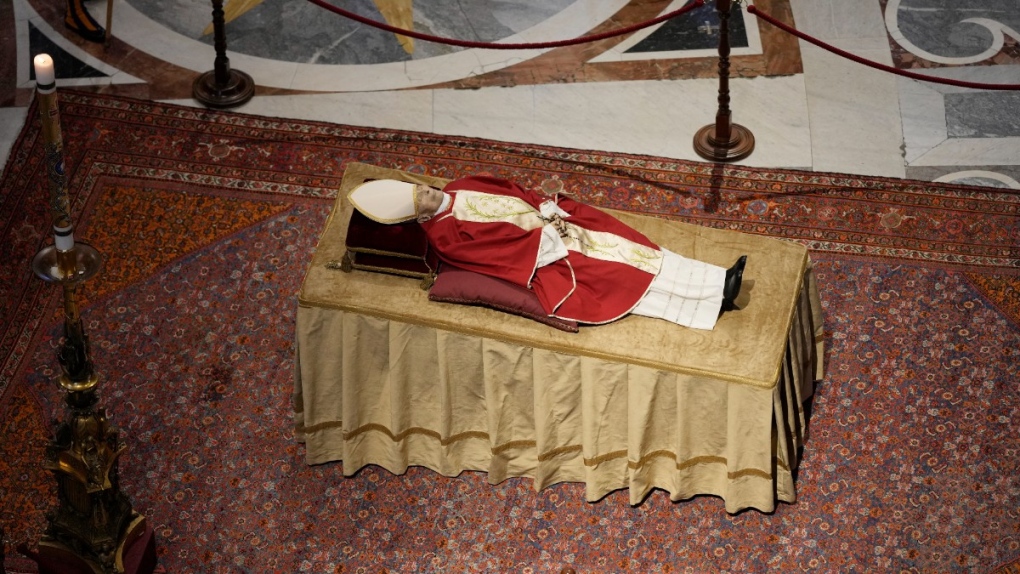 A written account of the history-making papacy of Pope Emeritus Benedict XVI will be placed alongside his body in his coffin for burial, the Vatican said Tuesday while revealing plans for the first funeral of a pontiff to resign in six centuries.

Meanwhile, tens of thousands of people filed through St. Peter’s Basilica to view his body as it lay in state for a second day.

When the viewing ends Wednesday evening, a one-page account of Benedict’s nearly eight-year papacy will be put into a metal cylinder and placed inside the coffin, along with other items including Vatican coins minted during his reign, said Vatican spokesman Matteo Bruni.

Benedict, 95, died Saturday after 10 years in an extraordinary papal retirement lived out in a monastery in the Vatican Gardens. Pope Francis will celebrate the funeral Mass in St. Peter’s Square on Thursday.

Although the Vatican has stressed that Benedict wanted “simplicity” to characterize his funeral, Bruni said the liturgy will “in great detail be that of pontifical ceremonies … with some original elements.”

After the public viewing concludes at 7 pm (1800 GMT) on Wednesday, “the coffin will be closed, with a special rite,” Bruni said. Benedict’s body will be placed in a coffin hewn from cypress, then put into a zinc coffin that will be sealed in a second wooden casket.

It will be brought out of the basilica and into the square about 40 minutes before Thursday’s funeral, as the crowd gathered for the service recites the rosary for Benedict, who served as pontiff from April 2005 through February 2013.

Vatican security estimated about 65,000 people filed past the bier on Monday and 70,000 had done so on Tuesday. Two influential US churchmen, Cardinals Timothy Dolan of New York and Sean Patrick O’Malley of Boston, attended Mass in the basilica at an altar just behind the central viewing area on the second day.

Among prominent clergymen coming for the funeral will be Hong Kong Cardinal Joseph Zen, his secretary said. Zen, a retired 90-year-old bishop, has been sharply at odds with Francis over the Vatican’s agreement with Chinese authorities on the appointment of bishops. Zen contends the deal betrays pro-Vatican Catholics in China and the clergy who have suffered persecution there.

Elevated to the rank of cardinal by Benedict, Zen had been arrested last year on suspicion of colluding with foreign forces to endanger China’s national security. While not charged with the security-related accusations, he was fined in November after being found guilty of failing to register a now-defunct fund that sought to help people arrested in pro-democracy protests in Hong Kong.

Hungarian Prime Minister Viktor Orban was among those at the basilica, whose doors opened before dawn. Like Benedict, Orban has crusaded for a revival of what European conservatives view as the continent’s Christian roots.

Others paying respects included Miriam Groppelli, an altar server in her parish in Milan, who wasn’t even born when Benedict was pontiff. The six-year-old had traveled by train with her father, Giuseppe Groppelli, 40, along with her grandparents and older brother and sisters.

“I told her his story, and she was really excited to come to Rome to say goodbye,” the father said. “Benedict has been very important to the Church, his speeches were so clear and beautiful. He leaves a great legacy of knowledge.”

Groppelli offered his take on Benedict’s unusual, nearly decade-long retirement arrangement that saw him living in the Vatican City monastery where he died. Francis, who was elected in 2013 by fellow cardinals to succeed him, lived nearby.

“I believe there’s no real war or competition within the church and between popes. The church lives and grows every day, also thanks to their words,” he said.

Benedict, the former Cardinal Joseph Ratzinger of Germany, had served for decades at the Vatican as the church’s guardian of doctrinal orthodoxy, was known for his theological knowledge as well as for eloquent speeches.

Since Benedict was no longer head of the Vatican City State, in contrast to protocols for funerals of popes who died while still reigning, only two countries — Italy and his native Germany — will send official delegations, according to the Vatican.

Instead, politicians and royalty, especially of predominantly Catholic countries, will attend in a private capacity.

With no need to elect a new pope, cardinals coming from around the world for Benedict’s funeral won’t have to stay in Rome for a conclave to pick the next Church leader. Still, Francis will have ample opportunity to confer with these “princes of the Church,” who serve as his privileged advisors.

The last decade saw an uneasy equilibrium over the presence in the Vatican of a retired pope and a reigning one.

Now, Francis heads the Church without that presence looming over his papacy.