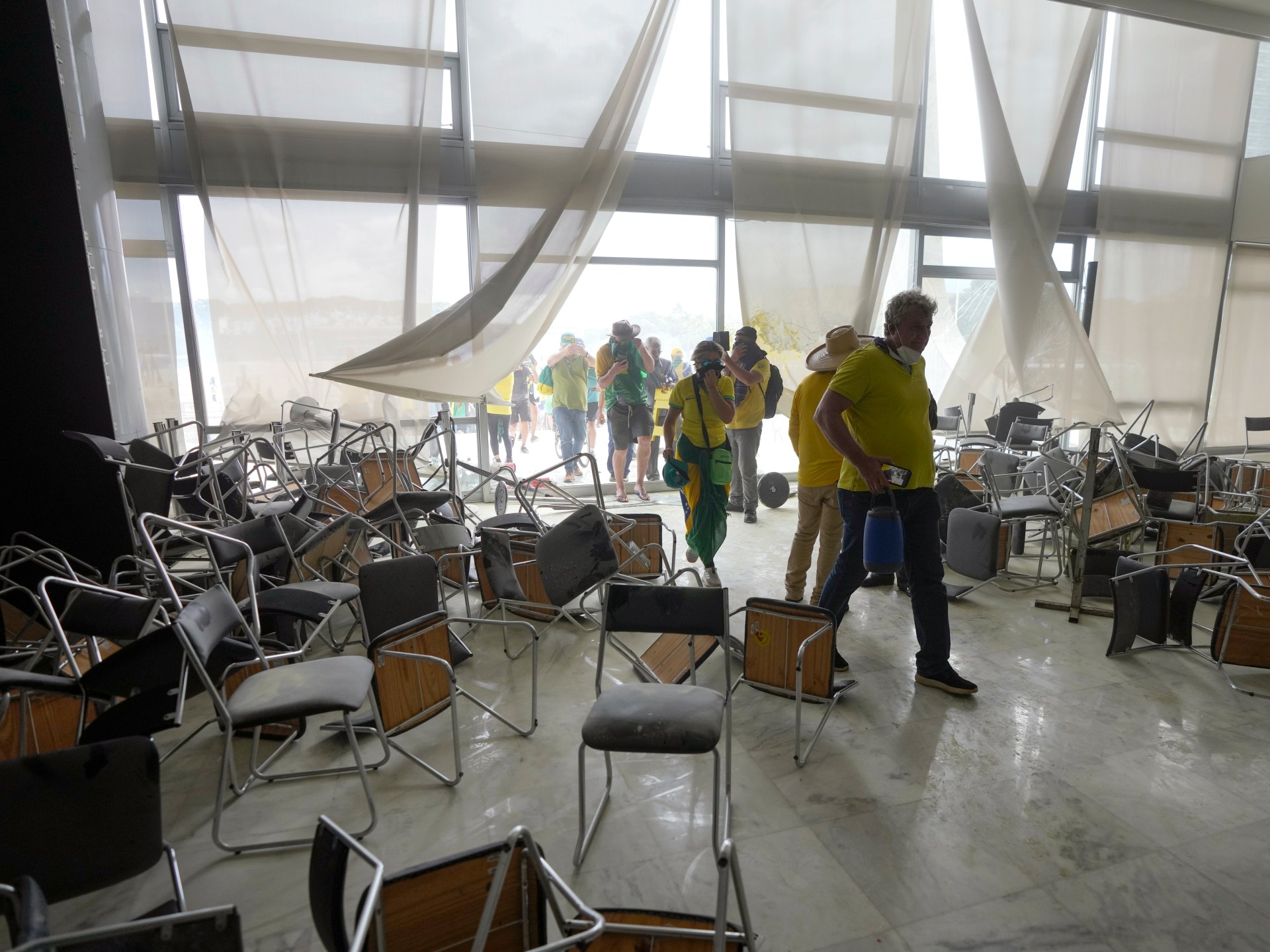 So-called “Bolsonaristas” smashed windows and furniture in the Supreme Court building. They climbed onto the roof of the Congress building and unfurled a banner that read “intervention”. They destroyed and stole works of art and broke glass panels. They roamed the presidential palace chanting pro-Bolsonaro slogans. They pulled a policeman off his horse and beat him to the ground.

These shocking scenes in Brasilia were eerily similar to those we witnessed at the US Capitol on January 6, 2021, when the seat of the Congress was invaded by die-hard supporters of President Donald Trump.

And the similarities between the two events were no coincidence.

It is well known that Bolsonaro is an admirer of the former US president and regularly borrows from his populist playbook. Bolsonaro’s son, congressman Eduardo Bolsonaro, traveled to the US just this past November to meet Trump. During his time there, he reportedly also held discussions with Trump’s former advisers, Stephen Bannon and Jason Miller, about his father’s possible next steps after losing the presidency to his left-wing rival, Lula de Silva.

While Bolsonaro supporters’ refusal to accept legitimate election results and their attempt to return their beloved leader to power through force appeared to be a repeat of the scenario that played out in the US almost exactly two years ago, there were some important differences between what happened. in Washington and Brasilia – and those differences may mean Brazil will struggle much more than the US to heal its democracy.

The first and most obvious difference is that in the US the insurrection by Trump supporters merely targeted the Capitol. In Brazil, however, the Bolsonaristas attacked the Supreme Court, as well. This, of course, was hardly surprising as Bolsonaro spent most of his presidency accusing Brazil’s highest judges of being biased and conspiring against him.

The other and perhaps the most consequential difference between the events in the US and Brazil was the way in which security forces responded to them.

In the US, despite some initial failings, security forces took action against the violent protesters without hesitation and there was never any suspicion that the military might actually be supportive of their demands for a coup against the newly elected president. In Brazil, however, it proved much more difficult to ascertain where the loyalties of the security forces lie.

Sunday’s violent “protest” in Brasilia did not come as a surprise. “Bolsonaristas” have been sharing posts about invading the Congress on WhatsApp and Telegram channels with tens of thousands of followers since at least January 3. It was also publicly known and widely discussed on social media that radical supporters across the country were renting buses to Bolsonaro. go to Brasilia to participate in violent anti-government action.

Despite all this, and despite being undoubtedly aware of the harsh criticism their US counterparts faced for their lack of preparation for the events of January 6, Brazilian security forces seemingly took no action whatsoever to prepare for Sunday’s anti-democratic actions. Worse, all available evidence points to large sections of the Military Police of the Federal District (FD), where Brasilia is located, and the armed forces, in general, being supportive of the attacks.

Since Bolsonaro’s electoral defeat, the armed forces have been turning a blind eye to Bolsonaristas camping around their barracks and demanding a coup. And on January 8, police officers at the scene were seen smiling, taking photographs and happily fraternising with those attacking Brazil’s most important democratic institutions.

The collusion between the FD police and Bolsonaristas on January 8 was so obvious that the governor of the Federal District, Ibaneis Rocha, felt the need to publicly apologize to President Lula, Supreme Court President Rosa Weber and Congress leaders Arthur Lira and Rodrigo Pacheco for what happened in the capital on that day. He also dismissed from office the DF Public Security Secretary, Anderson Torres, who had previously served as Bolsonaro’s Minister of Justice and is seen by many as the person responsible for the FD police’s coddling of violent Bolsonaristas.

This last-minute attempt by Governor Rocha to prove his loyalty to Brazil’s democratic institutions, however, has not been enough to save his job and prevent the federal government from interfering in the affairs of the FD. In the past couple of days, the Supreme Court decided to remove him from office for 90 days and President Lula appointed a federal representative to look after security in the FD for a 30-day period.

Now, the question on everyone’s mind is how will Lula secure the future of his young government, protect Brazil’s fragile democracy, and prevent further social unrest?

For their part, the Bolsonaristas show no sign of backing off. Just a day after the events of January 8, they set tires on fire and blocked busy roads in Sao Paulo and tried to block access to oil refineries in other states.

Many in Brazil, such as sociologist Celso Rocha de Barros, believe Lula’s only option in the face of such a shameless and persistent far-right attack on his government is to “start a dialogue with democratic right-wingers, who denounced the coup, and send the fascists to jail”.

The Lula government has already said it will do everything necessary to identify and punish everyone in positions of power, from local governments to the military, who appeared to have supported the violent attack on the Republic’s three powers. A new dialogue with right-wingers who condemned Sunday’s events will also likely start soon, since Lula has already managed to garner support from several centre-right parties that had been close to Bolsonaro in the past.

But only time will tell whether these moves will be enough to repair a broken democracy and unite a divided people.

Many believe the Lula government will emerge from this chaos even stronger than before. Journalist and digital citizenship expert Madeleine Lacsko, for example, told me that she believes the Brazilian right basically “committed suicide” by allowing the far-right to escalate their actions from internet trolling to real-life attacks on democratic institutions. Federal University of Rio de Janeiro’s Marcos Cavalcanti, meanwhile, said he is convinced articulating a democratic response to the crimes of Bolsonaristas will strengthen Lula’s political appeal.

But even those who think Lula can use Sunday’s events to strengthen and expand his government’s support base accept the disloyalty displayed by security forces on that day is deeply worrying.

Indeed, the Brazilian state can no longer rely on its security forces when facing anti-democratic, violent attacks from the far-right. The growth of support for far-right ideologies within the military and other security forces poses a tremendous danger to the future of Brazil’s democracy.

Now that the truth is out in the open, beyond punishing individuals responsible and trying to build new bridges with democratically minded right-wingers, the Lula government should also take immediate action against Bolsonaro’s ideological capture of Brazil’s powerful security apparatus.

The fact is that Brazilian security forces can no longer be trusted in a social unrest scenario. This means those who support democracy will need to mobilize and start searching for new ways to ensure the security and stability of Brazil’s democratic institutions.

TThe views expressed in this article are the author’s own and do not necessarily reflect Al Jazeera’s editorial stance.