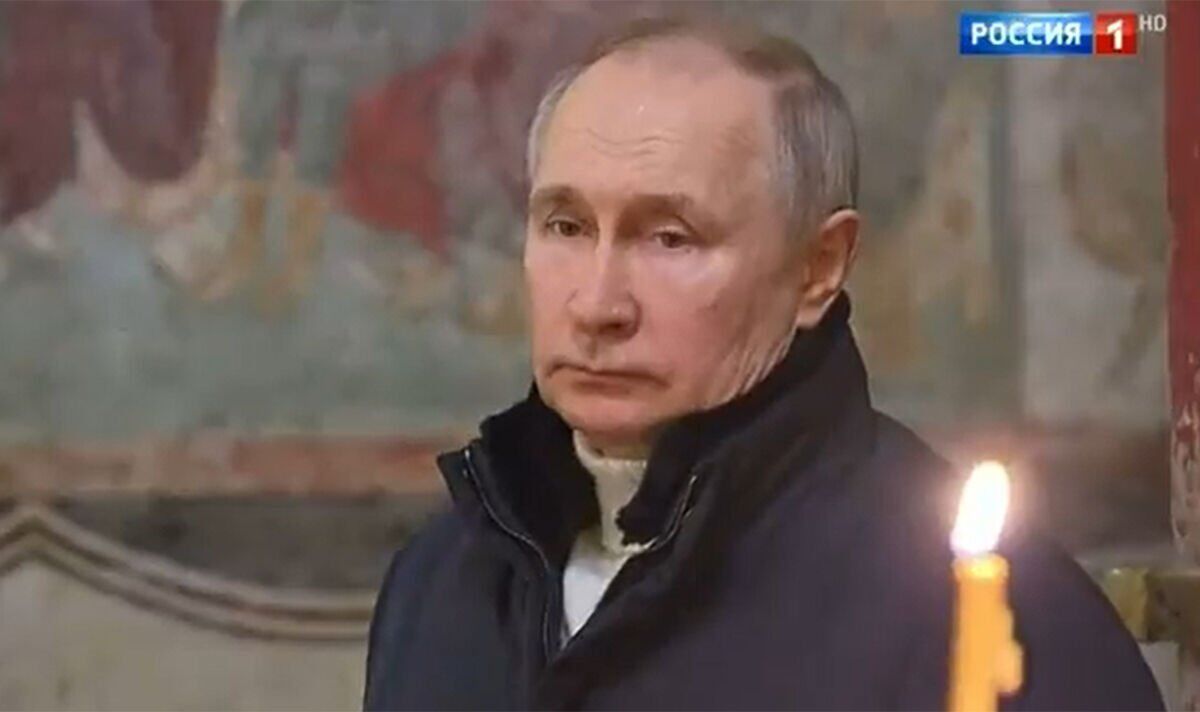 Vladimir Putin did not dare leave the Kremlin for Christmas celebrations as he attended an Orthodox Church service by himself inside the Kremlin. President Putin, who is understood to be wary of threats to his life, was the sole worshiper inside the gilded Cathedral of the Annunciation, which is connected directly to the Kremlin complex. It marks a break with tradition for the Russian leader, who usually marks Christmas in regions around Moscow and alongside fellow worshippers.
Orthodox Christmas is typically celebrated between January 6 and 7.

Russian state news agencies said it was the first time in years that President Putin had marked Christmas in Moscow rather than in regions around the capital.

Footage of the service shows the gloomy Russian leader watching on as Orthodox priests carried out the midnight service, known as the Divine Liturgy.

President Putin, wearing a blue jacket and a high-necked white sweater, crossed himself several times in the video clip, which was shown on state TV.

JUST IN: Putin humiliated as over 20 Russian diplomats and spies defected

The Cathedral of the Annunciation, located in the Kremlin, connects directly to the main building of the complex of the Grand Kremlin Palace.

The cathedral is historically known as the home church of the Russian Tsars.

This led many viewers on social media to describe the Russian leader as hiding in a “bunker”.

It also marks a distinct difference from Easter last year, where President Putin attended a service in the cathedral with thousands of others.

He mocked what he called “the pathetic attempts” by Kyiv to destroy the church in Ukraine.

This comes as Patriarch Kirill called for both sides to observe a 36-hour Christmas truce that Putin had announced.

However, this offer was rejected by Kyiv as a ruse to buy time for Russia’s forces to regroup.

The truce has already seemingly faltered according to the latest intelligence briefing from the UK Ministry of Defence.

The MoD confirmed that fighting between Russian and Ukrainian forces has continued at a “routine level” into the Orthodox Christmas period.