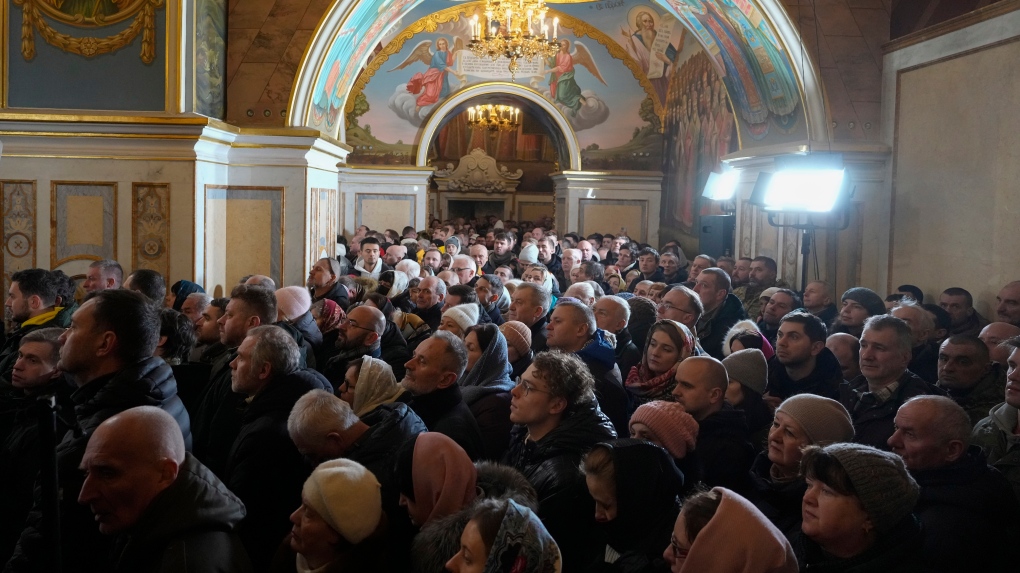 Packing Kyiv’s 1,000-year-old Lavra Cathedral for Orthodox Christmas, hundreds of worshipers heard the service in that church in the Ukrainian language for the first time in decades, a demonstration of independence from the Russian Orthodox Church.

Richly decorated with golden icons and panels, the cathedral — part of the complex known as the Monastery of the Caves and a UNESCO World Heritage Site — put up a video screen outside for the overflow of worshipers, despite the frigid temperatures of -10 Celsius (14 F).

Overlooking the right bank of the Dnieper River, the cathedral and monastery complex have been a pilgrimage site for centuries. And for the first time in the 31 years of Ukraine’s independence, the service there was held in the Ukrainian language. Ukrainian army troops in uniform were among those singing well-known Ukrainian carols.

Ukraine’s government on Thursday took over the administration of the revered Lavra complex from the Moscow patriarchate and allowed the Ukrainian church to use it for the Orthodox Christmas service. The move highlights the long-running tensions between the two churches exacerbated by Russia’s war in Ukraine.

“It’s a first victory” for Ukraine, said Oksana Abu-Akel who hailed it as a significant step in the Ukrainian Orthodox Church’s efforts to cut ties with Russia after it started the war more than 10 months ago. “This is the first time in 300 years that there is really our own service here. Every person feels this joy. It is a victory for all Ukrainians.”

Ukrainian Culture Minister Oleksandr Tkachenko said Thursday that the Lavra complex had been taken over by the state after the lease of the Moscow-controlled church expired on Dec. 31. Tkachenko attended the service Saturday.

“It’s an amazing moment. Previously this place — on Ukrainian territory, within Kyiv — has been linked to Moscow. Now we feel this is ours, this is Ukrainian. This is part of the Ukrainian nation,” said Alex Fesiak, who attended the service.

The Metropolitan Epiphanius, the primate of the Orthodox Church of Ukraine, spoke not just about Christmas but delivered a political message about the war.

“As a nation, we sought to live peacefully, having a good understanding with all our neighbors. But the enemy meanly and treacherously broke the peace and invaded our land, shedding blood, sowing death and wanting to destroy our statehood and our very Ukrainian identity he said during the service.

“Those who held us in captivity could not endure our achievements and our success,” he said. “The devil’s malice and envy prompt them to make war, but they are sure to be defeated. After all, the truth is on our side.”

Natalia Levshyna said her husband couldn’t come to the Christmas service as he is fighting on the front line, but she will send him photos of the service as it’s very important to him. Originally from Donbas, she said she stopped attending the church of the Moscow Patriarchate in 2014, when Russia annexed the Crimean Peninsula and supported the conflict in the eastern part of Ukraine.

“Our emotions are running high,” she said, barely holding back tears, describing her conviction that the Ukrainian church on Ukrainian soil should be independent from the Russian Orthodox Church.

“Our church must be synchronized with state policy. They must be one,” Levshyna said.

Others in Ukraine have decided to distance themselves from the Russian Orthodox Church by celebrating Christmas on December. 25.

On Friday, the Church of Moscow Patriarchate condemned the Ukrainian plans to hold a service in the Lavra Cathedral as “an attempt to forcefully seize … the cathedral by means of blackmail and misinformation of society.”

In 2019, the Orthodox Church of Ukraine received recognition from the Ecumenical Patriarch of Constantinople, but the Moscow’s patriarch refused to accept that.

But Ukrainian security agencies have claimed that some in the Ukrainian church have maintained close ties with Moscow. They’ve raided numerous holy sites of the church and later posted photos of rubles, Russian passports and leaflets with messages from the Moscow patriarch as proof that some church officials have been loyal to Moscow.

Prominent Ukrainian Orthodox Church leaders have rejected the allegations of ties with Moscow, insisting that they have loyally supported Ukraine from the start of the war and that a government crackdown will only hand a propaganda coup to Russia.