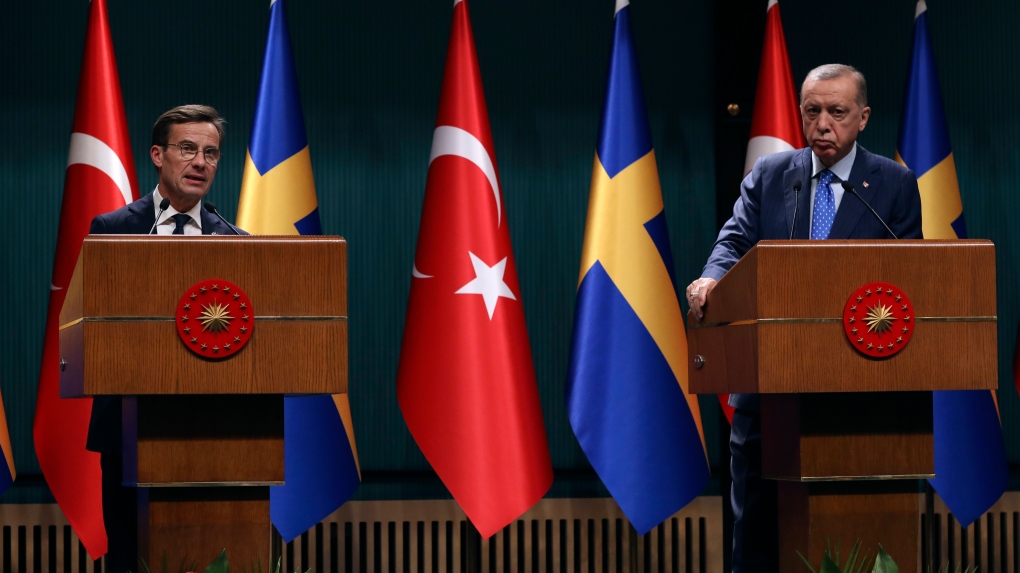 Swedish Prime Minister Ulf Kristersson on Friday denounced a protest by Kurds in central Stockholm, where an effigy of Turkiye’s president was hung from a lamppost, as an act of “sabotage” against Sweden’s bid to join NATO.

The protest outside City Hall on Wednesday drew an angry backlash from Turkiye, a NATO member which had already held off on approving Sweden’s application to become part of the Western military alliance until the government in Stockholm satisfies its demands.

The speaker of Turkiye’s parliament, Mustafa Sentop, canceled a visit by Andreas Norlen, the speaker of the Swedish parliament, that was scheduled for next Tuesday. Turkish lawmakers need to ratify Sweden’s NATO application for the Nordic nation to become a member.

Turkiye has made its approval conditional on Stockholm cracking down on exiled Kurdish militants and other groups that Ankara considers a threat to its national security. The Turkish Foreign Ministry summoned the Swedish ambassador on Thursday over the Stockholm demonstration.

“People tried to show their views on the Swedish NATO accession through a disgusting way of portraying President Erdogan in almost something looking like an execution.” Kristersson told reporters after a meeting with European Commission President Ursula von der Leyen. “That’s bad in every sense.”

Kristersson said he understood why Turkiye is outraged, saying “we would show the same reaction if this was aimed at a Swedish leader.”

He previously told Swedish broadcaster TV4 on Friday that it was “extremely serious” to stage a “mock execution of a foreign democratically elected leader” in a country where two leading politicians have been killed. Swedish Prime Minister Olof Palme was assassinated in 1986 and Foreign Minister Anna Lindh was fatally stabbed in 2003.

“I would say this is sabotage against the Swedish NATO application,” Kristersson said. “It is dangerous for Swedish security to act in this way.”

He expressed hope that the meeting between the Turkish and Swedish parliament speakers would take place at a later date.

Photographs posted on social media showed a mannequin resembling Erdogan hanging upside down. A group calling itself the Swedish Solidarity Committee for Rojava claimed it was behind the protest. Rojava is a Kurdish name for north and east Syria.

A man only identifying himself as Andreas told Swedish tabloid Aftonbladet that he was among those who put up the effigy “to create a reaction. To show that Turkiye is not a democracy. And we succeeded.”

Turkish Foreign Minister Mevlut Cavusoglu described the protest as a racist act and a hate crime. Sweden would not be able to “get away” with a simple condemnation of the incident, he said.

“This action took place in the center of the city, right in front of the municipality, in front of everyone,” Cavusoglu said. “Sweden has a responsibility here.”

“Sweden and Finland made a commitment concerning what they can do and put their signature on it,” the minister said, in reference to a memorandum of understanding under which Sweden and Finland pledged among other things to crack down on the activities of militant groups. “We want nothing more or nothing less. Whatever was agreed upon, we want that to be fulfilled.”

Earlier on Friday, Cavusoglu said the outlawed Kurdistan Workers’ Party, or PKK, and affiliated Kurdish groups in Syria were “laying mines on the path of Sweden’s NATO membership.”

“It is Sweden’s decision whether it wants to clear these mines or knowingly step on them,” he said in an interview with Turkish state-broadcaster TRT.

The Ankara chief prosecutor’s office launched an investigation into the incident following a criminal complaint filed by Erdogan’s lawyers and immediately sent a formal request for information and evidence from Swedish authorities, TRT reported.

In Ankara on Friday, about 50 members of an association representing families of soldiers or police killed in conflict with Kurdish rebels protested outside the Swedish Embassy, ​​the private DHA agency reported.

Swedish Foreign Minister Tobias Billstrom said the protest “now risks complicating and delaying the process that Sweden and its future NATO ally Turkiye have begun, working step by step to build trust in each other.” He used the Turkish government’s preferred name for Turkiye.

“This act plays directly into the hands of Russia and weakens our country, and it happened during the most serious security situation since the Second World War,” the Swedish foreign minister said.

Alarmed by Russia’s invasion of Ukraine, Sweden and Finland dropped their longstanding policies of military nonalignment and applied to join NATO in May. All 30 member countries must agree to admit the two Nordic neighbors into the security organization.

The Turkish government has pressed Finland and Sweden to crack down on groups it considers to be terrorist organizations and to extradite people suspected of terror-related crimes. Cavusoglu said last month that Sweden was not even “halfway” through addressing his country’s concerns.

Meanwhile, Cavusoglu said a third meeting between Turkish, Swedish and Finnish officials would take place at NATO headquarters in Brussels.