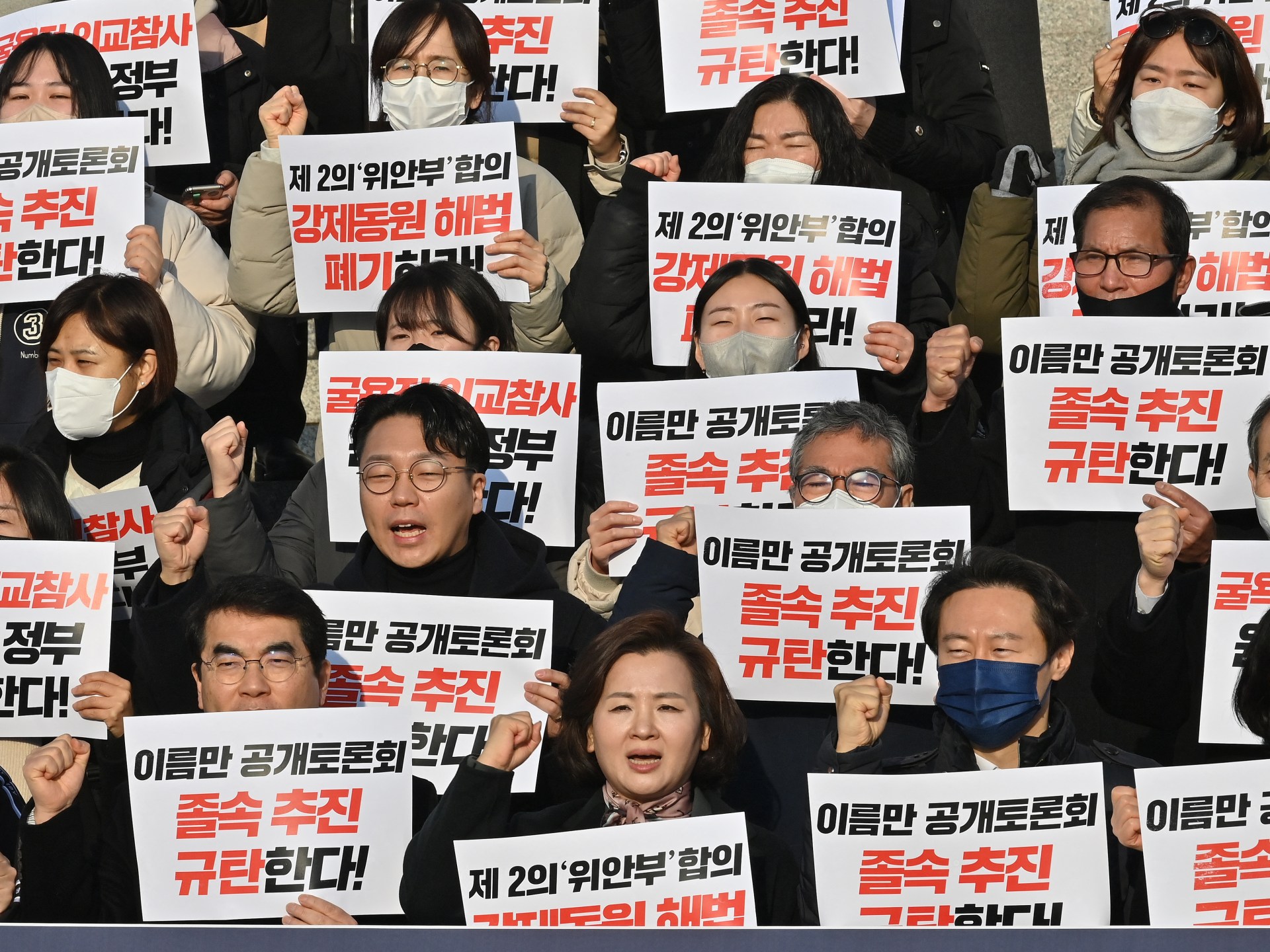 South Korea’s government has proposed compensating Koreans who were forced to work for Japanese firms during World War II using funding from a domestic foundation rather than funds from the companies involved in the forced labor.

The plan, unveiled at a public hearing on Thursday, comes as Seoul seeks closer ties with Tokyo to counter threats from North Korea and its growing nuclear and ballistic missile capabilities.

The proposal immediately prompted a backlash from some Korean victims and their families who called the plan “humiliating”.

The plan, proposed by the South Korean foreign ministry on Thursday, would compensate the former forced laborers using a foundation funded by businesses in the country that benefitted from a 1965 treaty in which Seoul received a package of $300m in economic aid and $500m in loans from Japan.

“Through our discussions with the victims and experts, we’ve seen that the chances of liquidation of Japanese corporate assets to compensate all victims are slim, and we’ve found that it is possible for a third party to make payment as legal bonds on on behalf of the defendant Japanese company,” said Seo Min-jung, the ministry’s director-general for Asia Pacific affairs.

Seo said a “creative approach” was needed, and that the government would consult victims and their families before making a decision.

She went on to stress that the proposal was meant to prioritize compensating victims.

The unresolved legacy of Japan’s colonization of the Korean Peninsula from 1910 to 1945, including restitution for Koreans forced to work at Japanese firms and in military brothelshas long been a source of contention between the two countries.

The foundation’s chief, Shim Kyu-sun, said he would encourage South Korean companies to donate “from the perspective of social responsibility”.

Some victims and their families resisted, however, saying the plan would relieve Japan of its obligation to pay and apologize.

“It’s an idea where Japan does not bear any burdens at all,” Lim Jae-sung, a lawyer for several victims, told the hearing, accusing the ministry of ignoring the victims and “wrecking trust” between both sides.

Kim Young-hwan, who also works with the labor victims, said they wanted the Japanese firms to acknowledge their abuses.

Some attendees held posters with the slogan “Apologise Japan” and jeered at officials.

South Korea’s Supreme Court in 2018 ordered Japan’s Mitsubishi Heavy Industries and Nippon Steel to pay reparations to some 15 former forced labourers, but no one has been compensated to date. The top court is also set to examine a case that could see the assets of the companies sold off – something Japan has called a “red line”.

Tokyo insists that the issue has been settled in past bilateral agreements.

The row – which spilled into a trade dispute – has plunged relations between the two allies of the United States to their lowest level in decades.

South Korean President Yoon Suk-yeol, who took office in May 2021, has pledged to improve ties with Tokyo. He held a summit with Japanese Prime Minister Fumio Kishida in November, where the pair agreed on the need to “resolve the pending issues as soon as possible” amid a year of a record number of missile tests by North Korea.

A group of activists meanwhile staged a rally outside the National Assembly on Thursday, where the hearing was held, criticizing the South Korean government’s proposal as well as Japan’s refusal to pay compensation.

Under a 1965 deal, which normalized relations between Japan and South Korea, Seoul was required to consider all pre-treaty compensation issues settled. The economic aid and loans were largely spent to rebuild the country’s infrastructure and economy after the 1950–53 Korean War.

But, former forced laborers began to demand compensation in the 1990s.

The rows over wartime history have fueled concerns in the United States, with analysts saying they could threaten security cooperation amid North Korean weapons tests and undermine Washington’s efforts to build an Indo-Pacific alliance to counter China’s growing global influence.