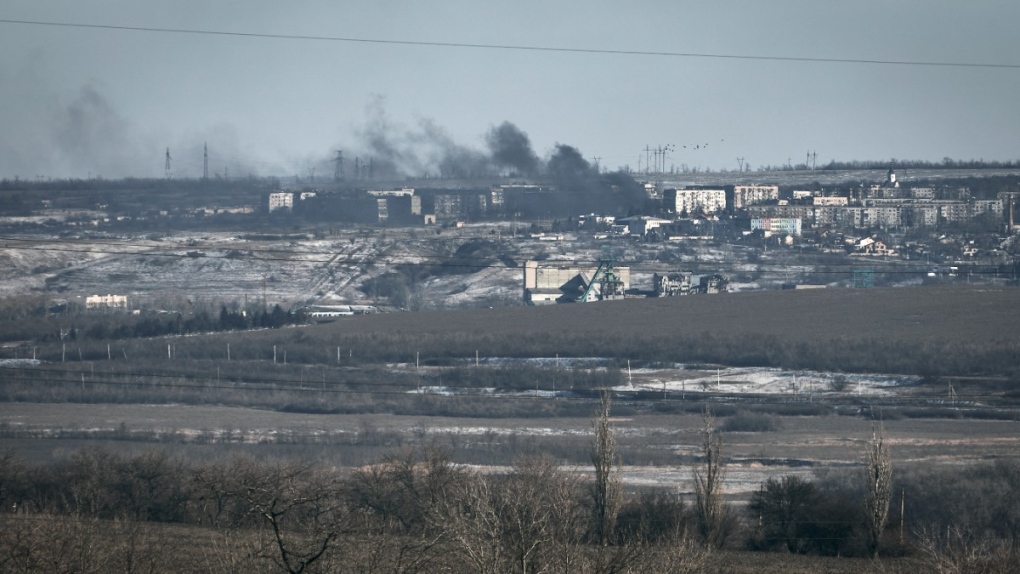 Russia said Thursday that its forces are edging closer to capturing a salt-mining town in eastern Ukraine, which would mark an elusive victory for the Kremlin but come at the cost of heavy Russian casualties and extensive destruction of the territory they claim.

More than 100 Russian troops were killed in the battle for Soledar over the past 24 hours, Ukraine’s Donetsk Gov. Pavlo Kyrylenko said in televised remarks.

“The Russians have literally marched on the bodies of their own soldiers, burning everything on their way,” Kyrylenko said while reporting that Russian forces had shelled a dozen towns and villages in the region in the past day.

Russian forces are using mortars and rockets to bombard Soledar in an unrelenting assault, struggling for a breakthrough after military setbacks have turned what the Kremlin hoped would be a fast victory into a grinding war of attrition that has dragged on for nearly 11 months with no end insight.

“Civilians are trying to survive amid that bloodbath as the Russians are pressing their attacks,” Kyrylenko said. Serhii Cherevatiy, a spokesman for Ukraine’s forces in the east, said Soledar was hit by Russian artillery more than 90 times in the past day.

Soledar’s fall would be a prize for a Kremlin starved of good battlefield news in recent months, after losing the important city of Kherson in December. It would also offer Russian troops a springboard to conquer other areas of the eastern Donetsk province that remain under Ukrainian control, particularly the nearby strategic city of Bakhmut.

The Russians’ tactic in the assault on Soledar is to send one or two waves of soldiers, many from the private Russian military contractor Wagner Group who take heavy casualties as they probe the Ukrainian defenses, a Ukrainian officer near Soledar told The Associated Press. When Ukrainian troops suffer casualties and are exhausted, the Russians send in another wave of highly-trained soldiers, paratroopers or special forces, to get a new toehold on the battlefield, said the Ukrainian official, who insisted on anonymity for security reasons.

Kremlin spokesman Dmitry Peskov praised the “selfless and courageous action” of Russian troops, which he said is helping them to press forward in Soledar.

“Gigantic work has been done in Soledar,” he said.

Peskov, however, stopped short of confirming a claim by Wagner Group owner Yevgeny Prigozhin, who boasted about capturing Soledar on Wednesday.

“There is still a lot to be done and it’s too early to stop and rub our hands, the main work is still ahead,” he said in a conference call with reporters.

Meanwhile, Ukraine’s deputy defense minister, Hanna Malyar, said at a briefing Thursday: “The enemy continues the assaults, but suffers significant losses and is not successful.”

The AP was unable to verify the claims made by either side.

Ukrainian President Volodymyr Zelenskyy vowed that the troops defending Soledar “will be guaranteed ammunition and everything necessary.”

Russia’s Defense Ministry made no mention of Soledar in its daily briefing on Thursday. The ministry announced Wednesday that the country’s top military officer — the chief of the military’s General Staff, Gen. Valery Gerasimov — was put in charge of the military operation in Ukraine. He replaces Gen. Sergei Surovikin, who was demoted to deputy only three months after he was installed in that job.

Ukrainian officials also said they were taking note of personnel changes at the top levels of the Russian military command, describing them as a sign that Moscow isn’t achieving what it had hoped.

“Personnel changes would not occur with such frequency if they were doing well,” a senior Ukrainian military official, Brig. Gen. Oleksiy Hromov, said.

The deputy head of Ukraine’s presidential office, Kyrylo Tymoshenko, reported Thursday that two civilians were killed and a further eight were wounded in Russian attacks on Wednesday.

Citing data from regional officials, Tymoshenko said that one civilian died and five were wounded in the southern Kherson province, where shells hit a maternity hospital, private houses and apartment buildings, while one person was killed in Donetsk.

At the United Nations, Ukraine’s First Deputy Foreign Minister Emine Dzhaparova told the Security Council that Ukraine will seek a general assembly vote on a resolution supporting Zelenskyy’s 10-point peace formula that includes the restoration of Ukraine’s territorial integrity and the Russians’ withdrawal. The plan that Zelenskyy presented to the Group of 20 meeting in Bali, Indonesia in November also includes the release of all prisoners, a tribunal for those responsible for the Russian aggression, and security guarantees for Ukraine.