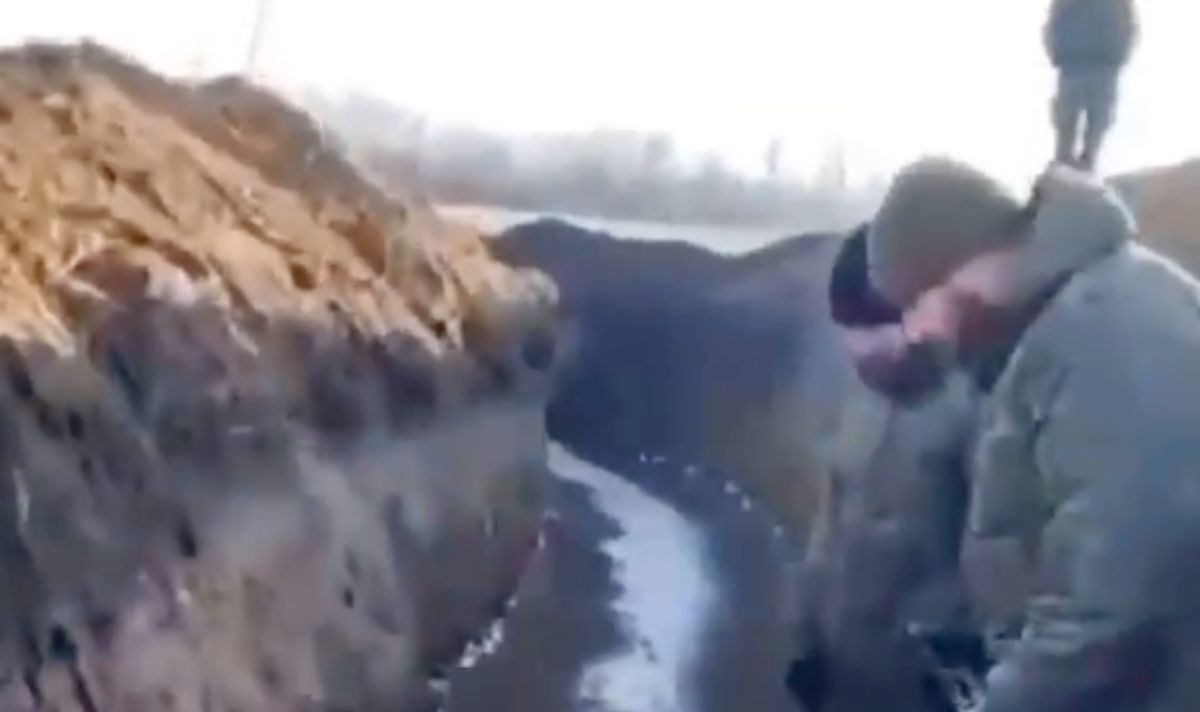 Russian soldiers have recorded a message slamming Russian President Vladimir Putin and the Russian military high command for leaving them high and dry in a frozen trench with supplies or medical care. Recording the scene in Ukraine‘s Luhansk province, the Russian soldier hits out at commanders for forcing his unit into the ice-filled trench with “blackmail.”

The Russian infantryman reports: “So there are fantastic positions. ‘Prepared’ according to the opinion of our command.

“We are supposed to f***ing live here,” exclaims another.

The man recording adds: “For clarification, it is -20C outside right now.

“We are offered to live here in the ice, at the same time, our leadership is blackmailing us, not providing us with medical aid and supplies until we move into these positions.

Appealing to Putin personally, the soldier continues: “We believe the actions of our command undermine the combat capability of our army!

“The guys will simply freeze and get ill – who is going to be fighting!”

Russia said Thursday that its forces are edging closer to capturing a salt-mining town in eastern Ukrainewhich would mark an elusive victory for the Kremlin but come at the cost of heavy Russian casualties and extensive destruction of the territory they claim.

More than 100 Russian troops were killed in the battle for Soledar over the past 24 hours, Ukraine‘s Donetsk Governor Pavlo Kyrylenko said in televised remarks.

“The Russians have literally marched on the bodies of their own soldiers, burning everything on their way,” Kyrylenko said while reporting that Russian forces had shelled a dozen towns and villages in the region in the past day.

Russian forces are using mortars and rockets to bombard Soledar in an unrelenting assault, struggling for a breakthrough after military setbacks have turned what the Kremlin hoped would be a fast victory into a grinding war of attrition that has dragged on for nearly 11 months with no end insight.

Kyrylenko added: “Civilians are trying to survive amid that bloodbath as the Russians are pressing their attacks.”

Soledar’s fall would be a prize for a Kremlin starved of good battlefield news in recent months, after losing the important city of Kherson in December.

It would also offer Russian troops a springboard to conquer other areas of the eastern Donetsk province that remain under Ukrainian control, particularly the nearby strategic city of Bakhmut.

The Russians’ tactic in the assault on Soledar is to send one or two waves of soldiers, many from the private Russian military contractor Wagner Group who take heavy casualties as they probe the Ukrainian defenses, a Ukrainian officer near Soledar told The Associated Press.

When Ukrainian troops suffer casualties and are exhausted, the Russians send in another wave of highly-trained soldiers, paratroopers or special forces, to get a new toehold on the battlefield, said the Ukrainian official, who insisted on anonymity for security reasons.

Kremlin spokesman Dmitry Peskov praised the “selfless and courageous action” of Russian troops, which he said is helping them to press forward in Soledar.