Pope Francis grateful for ‘noble’ Benedict and his prayers 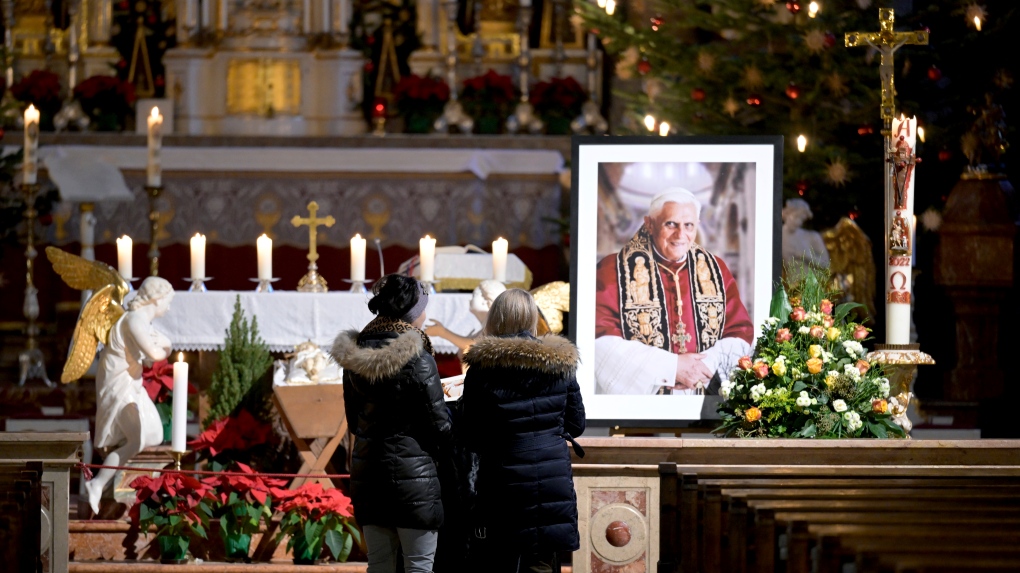 Hours after the death Saturday of Pope Emeritus Benedict XVI, Pope Francis praised his “noble” predecessor and expressed gratitude for his life of faith and prayers, especially those offered in the nearly 10 years since the shy churchman dramatically became the first pontiff in centuries to retire from the papacy.

In his first public comments about Benedict since the Vatican announced his midmorning death in the monastery where the former pontiff lived out his last years, Francis spoke of his feelings over the passing, adding to tributes that poured in for his predecessor throughout the day.

During his homily at a New Year’s Eve Vespers service in St. Peter’s Basilica, Francis said “thoughts go spontaneously to the very dear Pope Emeritus Benedict XVI, who left us this morning.”

“With deep feeling, we recall his person, so noble, so gentle,” Francis said. “And we feel in the heart so much gratitude: gratitude to God for having given him to the Church and to the world,” said the pope. “Gratitude to him, for all the good he did, and above all for his witness of faith and of prayer, especially in these last years of withdrawn life.

“Only God knows the value and the strength of his intercession, of his sacrifices offered for the good of the Church,” Francis said softly.

Earlier, the Vatican said Benedict would have the simple funeral he wanted, when Francis on Thursday morning would celebrate Mass in St. To install Peter’s Square.

The 95-year-old Benedict died Saturday morning in the Vatican monastery where he had resided since shortly after shocking the world by retiring in 2013. Benedict had been frail for years, and the Vatican three days earlier had said Benedict’s health was worsening.

Within minutes of the announcement, words of praise and fond remembrance were offered by world leaders and religious figures, including the US President Joe Biden, the archbishop of Canterbury and Jewish advocates.

“Jill and I join Catholics around the world, and so many others, in mourning the passing of Pope Emeritus Benedict XVI,” Biden said in a written statement. “I had the privilege of spending time with Pope Benedict at the Vatican in 2011 and will always remember his generosity and welcome as well as our meaningful conversation.

Biden also recalled Benedict’s 2008 visit to the White House, saying the then pontiff had remarked that “‘the need for global solidarity is as urgent as ever, if all people are to live in a way worthy of their dignity.”‘

Vatican spokesman Matteo Bruni said of the funeral that “following the desire of the pope emeritus, (it) will be carried out in the sign of simplicity.”

Benedict spent two more years in papal retirement than in the actual papacy, which had begun in 2005. Benedict died in the austere Vatican monastery where he had resided since shortly after retiring.

While pope, Benedict was head of state, since the Vatican is an independent city state. But with no such role at the time of his death, the Vatican’s funeral details reflected a scaling back of pomp and protocol.

Only official delegations from Italy and Benedict’s native Germany were invited to the funeral.

With Benedict out of the public’s eye for nearly a decade, the turnout of the faithful for the outdoor funeral was also expected to be reduced, certainly compared to the outpouring of faithful for the last funeral of a reigning pope — St. John Paul II in 2005.

Starting on Monday morning, the faithful will be able to file by his body in St. Peter’s Basilica, and viewings will also be held on Tuesday and Wednesday.

In a striking contrast to the statements of sorrow over Benedict’s death, hundreds of tourists in St. Peter’s Square rushed to catch a glimpse of Francis, as an aide pushed his wheelchair so he could view the life-sized creche scene and pray silently in front of it, in a Vatican tradition.

Tourists and Romans snapped photos and screamed in delight, and the Swiss Guard band played “Silent Night” as the pope, who has a knee ligament problem, rolled by.

Hours earlier, by email and broadcast, the Holy See announced that Benedict had died. “This is Vatican Radio. We are interrupting our regular transmissions to announce with grief and emotion that the Pope Emeritus has returned to the home of his father.”

Benedict “prayed in silence, as one should do,” said Fabrizio Giambrone, a tourist from Sicily who recalled the late pontiff as a “very good person” who lacked the “charisma” of his predecessor, St. John Paul II, and of his successor, Pope Francis.

While the bells of St. Peter’s Basilica didn’t toll to mark the death announcement, in the somber air in the small Bavarian town where Ratzinger was born in 1927, church bells tolled solemnly at St. Peter’s Basilica. Oswald Church in Marktl am Inn, a German town near the Austrian border.

In Krakow, one of Poland’s oldest and largest church bells that is used to mark events of national significance, the Sigismund Bell, tolled at noon.

Poland is a heavily Roman Catholic country where a conservative government is in power. President Andrzej Duda tweeted that Benedict’s teachings served as a “guidepost among the many winding and deceptive paths of the contemporary world.”

The American Jewish Committee in a statement from New York praised Benedict for having “continued the path of reconciliation and friendship with world Jewry blazed by his predecessor, John Paul II.” The organization noted that the German-born Catholic church leader had “paid homage in Auschwitz” to the victims of the Holocaust and had made an official visit to Israel.

Praise for Benedict’s religious devotion came from the archbishop of Canterbury, Justin Welby. “In his life and ministry, Pope Benedict XVI directed people to Christ,” the Anglican leader tweeted.

Dubbed “God’s Rottweiller” for his fierce defense of Catholic teaching in the decades that he led the Vatican doctrinal orthodoxy office, Benedict was viewed less enthusiastically by some for his stance on homosexuality and against women’s desire to break with the church’s ban on female priests.

Francis DeBernardo, executive director of the US-based New Ways Ministry, which advocates for LGBTQ+ Catholics noted that Ratzinger in 1986 helped shape a document that called homosexual orientation as “an objective disorder” and cited his involvement with a 1994 Catechism describing sexual activity between people of the same gender as “acts of grave depravity.”

“Those documents caused — and still cause — grave pastoral harm” to many LGBTQ+ people, DeBernardo said, while noting that his organization was praying for the repose of Benedict’s soul.

Francis has used his papacy to try to set a less judgmental tone against gay Catholics.

While hailing Benedict’s “profound example of humility and willingness to overturn tradition” by resigning, advocates for opening up the priesthood to women expressed dismay over his refusal to embrace their aims.

“His relentless pursuit to stifle the movement for women’s ordination revealed a man unwilling or unable to engage with the urgent needs of the church today,” said Kate McElwee, executive director of the Women’s Ordination Conference.

Nicola Zolezzi, 58, on vacation from Genoa, Italy, with his family, said he was sorry to learn of Benedict’s death.

“Maybe he wasn’t that close to the people like Francis or John Paul II, but I think he was a good person and carried out his role well,” he said.


Paolo Santalucia in Vatican City, Monika Scislowska in Warsaw, Poland, and Geir Moulson in Berlin contributed to this story.