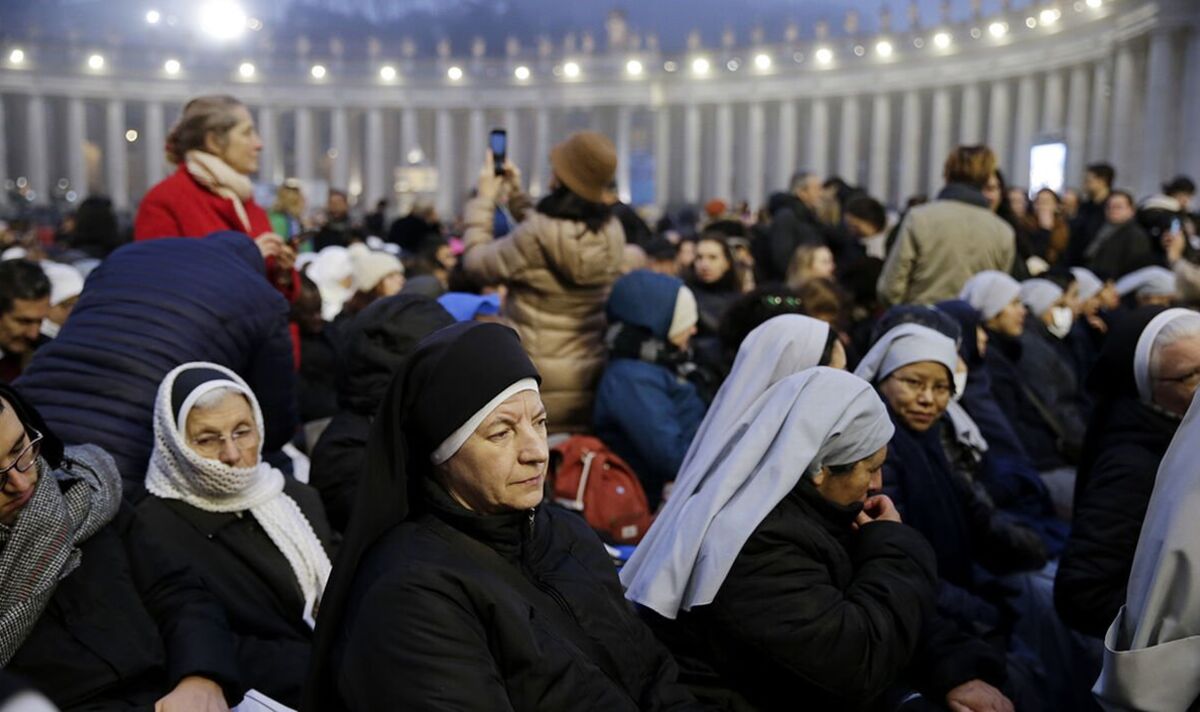 Vast crowds have packed out St Peter’s Square for the funeral of Pope Emeritus Benedict XVI to pay their respects to the German theologian who made history by retiring. Afterwards, mourners will participate in a rare requiem Mass for a dead pontiff presided over by a living one – Pope Franciswho succeeded Pope Benedict in 2013.

Thick fog shrouded the Vatican before dawn as police manned metal detectors and barricades and herded well-wishers into the square.

Heads of state and royalty, clergy from around the world and thousands of faithful have flocked to the Vatican, ignoring Benedict’s requests for simplicity and attempts to keep the first funeral for a pope emeritus in modern times low-key.

Many hailed from Benedict’s native Bavaria, donning traditional dress, including boiled wool coats to keep out the cold.

Raymond Mainar, from Munich, said: “We came to pay homage to Benedict and wanted to be here today to say goodbye. He was a very good pope.

Formerly Joseph Ratzinger, Pope Benedict is regarded as one of the 20th century’s greatest theologians and spent his lifetime upholding church doctrine.

However, he will likely be best remembered for stepping down a decade ago.

Pope Francis has praised Benedict’s courage to stand aside, saying it “opened the door” to other popes doing the same. Francis, for his part, recently said he has already left written instructions outlining the conditions in which he too would resign.

Francis was due to preside over the funeral, with the authorities estimating some 100,000 will attend, much higher than the original estimate of 60,000, Italian media reported, citing police security plans.

Pall bearers with the coffin of Pope Benedict (Image: Getty)

Only Italy and Germany were invited to send official delegations, but other heads of state and government took the Vatican up on its offer and came in their “private capacity.”

They included several other heads of state, at least four prime ministers and two delegations of royal representatives.

Early Thursday the Vatican released the official history of Benedict’s life, a short document in Latin that was placed in a metal cylinder in his coffin )before it was sealed, along with the coins and medallions minted during his papacy and his pallium stoles.

The document gave ample attention to Benedict’s historic resignation and referred to him as “pope emeritus,” citing verbatim the Latin words he uttered on Feb. 11, 2013, when he announced he would retire.

The document, known as a “rogito” or deed, also cited his theological and papal legacy, including his outreach to Anglicans and Jews and his efforts to combat clergy sexual abuse “continually calling the church to conversion, prayer, penance and purification.”

The funeral rite calls for Benedict’s coffin to be carried out from the basilica and placed before the altar as the faithful recite the rosary. The ritual itself is modeled on the code used for dead popes but with some modifications given Benedict was not a reigning pontiff when he died.

Pope Benedict’s involvement with the Catholic Church was not without controversy.

During St John Paul II’s quarter-century as pope, the then-Ratzinger spearheaded a crackdown on dissent as prefect of the Congregation for the Doctrine of the Faith, taking action against the left-leaning liberation theology that spread in Latin America in the 1970s and against dissenting theologians and nuns who did not toe the Vatican’s hard line on matters like sexual morals.

His legacy was also tarnished by the clergy sexual abuse scandal, even though he recognized earlier than most of the “filth” of priests who raped children, and actually laid the groundwork for the Holy See to punish them.

As cardinal and pope, he passed sweeping church legislation that resulted in 848 priests being defrocked from 2004-2014, roughly his pontificate with a year on either end.

However, abuse survivors still held him responsible for the crisis, for failing to sanction any bishop who moved abusers around and identifying him as embodying the clerical system that long protected the institution over victims.

Main US survivor group SNAP said: “Any celebration that marks the life of abuse enablers like Benedict must end.”