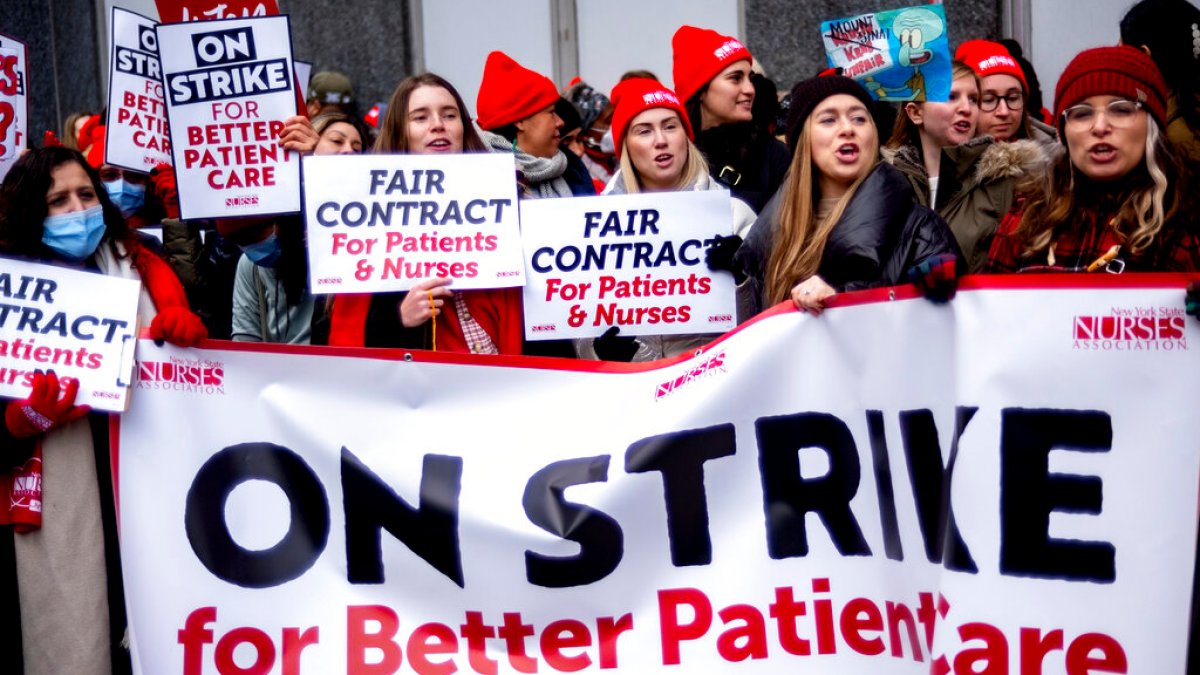 More than 7,000 nurses are on strike at two NYC hospitals, stating that low wages and staffing levels have squeezed workers.

Nurses at two major hospitals in New York City have gone on strike, citing low wages and staffing levels that have left many exhausted several years into the COVID-19 pandemic.

On Monday, about 3,600 nurses at Mount Sinai Hospital on the Upper East Side of Manhattan and as many as 3,500 at Montefiore Medical Center in the Bronx started their strike.

“We were heroes only two years ago,” said Warren Urquhart, a nurse in the transplant and oncology units. “We were on the front lines of the city when everything came to a stop. And now we need to come to a stop so they can understand how much we mean to this hospital and to the patients.”

The COVID-19 pandemic filled United States hospitals and heaped strain on medical workers, many of whom began to consider their future in the profession as hospitals saw large profits. According to a 2022 survey by ShiftMed, about two-thirds of nurses said that they were considering leaving the profession within two years.

The nurses’ union, the New York State Nurses Association (NYSNA), has said that staffing shortages at the New York City hospitals have left some workers caring for twice as many patients as is normal.

“We can no longer sustain what’s happening,” Michelle Gonzalez, a registered nurse at Montefiore, told Al Jazeera. “We’ve been trying so hard to tell the hospital to make changes. We don’t want to do this but we feel like we have no other options.”

Jed Basubas said that he cares for between eight and 10 patients at a time, and nurse practitioner Juliet Escalon said that she sometimes skips bathroom breaks to attend to patients. Ashleigh Woodside said that her 12-hour operating room shifts frequently become 14-hour ones, as low staffing levels push workers to take on longer shifts.

Elected officials have weighed in, offering some words of encouragement.

“Nurses have been through hell and back for their patients,” said New York Congressman Jamaal Bowman. “I stand with NYSNA nurses as they fight for fair workplace conditions.”

It was an honor to join @nynurses this morning on the picket line.

If CEOs can double their pay, we can give our nurses a fair contract.@montefioreNYC and @MountSinaiNYC It’s time for you to step up and get a fair contract done TODAY! pic.twitter.com/PrDdMwY8OH

Montefiore and Mount Sinai said they had taken steps to minimize disruptions during the strike and would lean on temporary staffers, divert ambulances to other medical centers, and postpone nonemergency surgeries.

Montefiore said it had agreed to hire more than 170 additional nurses, and Mount Sinai said it had made progress “to attract and hire more new nurses, despite a global shortage of healthcare workers that is impacting hospitals across the country”.

“We remain committed to seamless and compassionate care, recognizing that the union leadership’s decision will spark fear and uncertainty across our community,” Montefiore said. “This is a sad day for New York City.”

“We love our job. We want to take care of our patients. But we just want to do it safely and in a humane way, where we feel appreciated,” said Woodside, who has been a nurse for eight years.

NYSNA had originally stated that other hospitals could launch strikes on the same day as Mount Sinai and Montefiore, for a total of about 16,000 nurses.

However, several have reached tentative agreements that have lowered the likelihood of the strikes. Nurses at NewYork-Presbyterian Hospital reached a potential deal on Saturday that increases staffing levels and boosts pay by 18 percent over a three-year period.

Since contract negotiations started four months ago, the union has reached tentative agreements at seven other New York City hospitals.