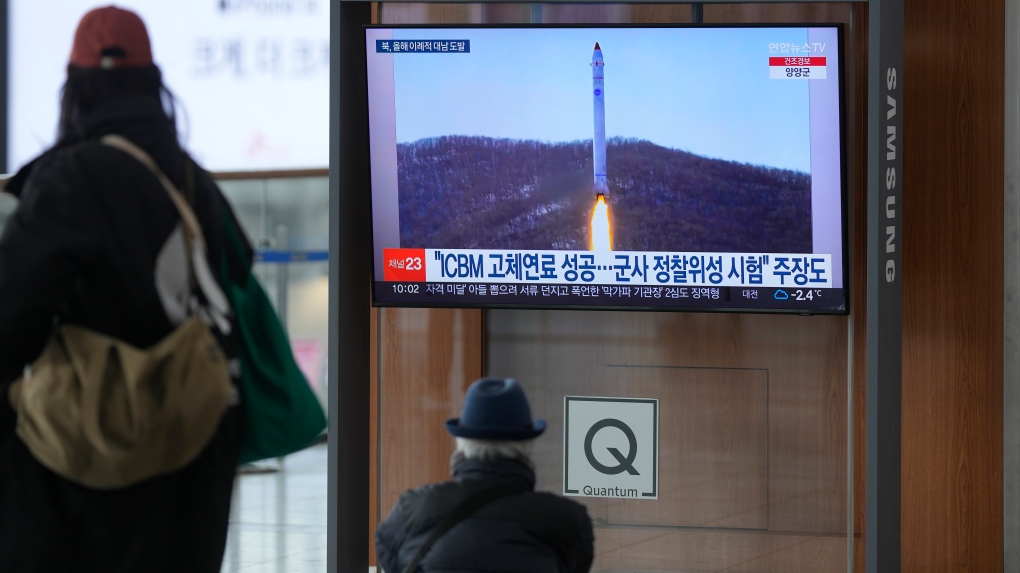 Kim’s moves are in line with the broad direction of his nuclear weapons development program as he has repeatedly vowed to boost both the quality and quantity of his arsenal. Some experts said Kim would likely continue a provocative run of weapons tests this year before he would ultimately try to use his enlarged arsenal to wrest concessions like sanctions relief in future dealings with his rivals.

“They are now keen on isolating and stifling (North Korea), unprecedented in human history,” Kim said at a recently ended ruling party meeting, according to the official Korean Central News Agency. “The prevailing situation calls for making redoubled efforts to overwhelmingly beef up the military muscle to thoroughly guarantee the sovereignty, security and fundamental interests of (the country).”

Kim accused South Korea of ​​being “hell-bent on imprudent and dangerous arms build-up” and openly trumpeting its preparations for war with North Korea. That, Kim said, highlights the need to mass-produce battlefield tactical nuclear weapons and calls for “an exponential increase of the country’s nuclear arsenal,” KCNA said.

Kim also set forth a task to develop another ICBM system “whose main mission is quick nuclear counterstrike,” KCNA said, without elaborating.

Tactical nuclear weapons and a military reconnaissance satellite are among an array of weapons systems that Kim has vowed to introduce in recent years. Other weapons he wants include a multi-warhead missile, a more agile solid-fuelled ICBM, an underwater-launched nuclear missile and a hypersonic weapon.

Outside worries about North Korea’s nuclear program have grown since the North last year approved a new law that authorized the preemptive use of nuclear weapons in a broad range of situations and openly threatened to use its nuclear weapons first.

During his speech at the party meeting, Kim reiterated that threat.

“(Kim’s report) made clear that our nuclear force considers it as the first mission to deter war and safeguard peace and stability. However, if it fails to deter, it will carry out the second mission, which will not be for defense,” KCNA said.

The North’s increasing nuclear threats have prompted the United States and South Korea to expand their regular exercises and strengthen a trilateral security cooperation involving Japan. The US military has warned any nuclear attack by North Korea against the United States or its allies and partners “will result in the end of that regime.”

“It was during his 2018 New Year’s speech that (Kim) first ordered the mass production of warheads and ballistic missiles, and he’s doubling down on that quantitative expansion goal in the coming year,” said Ankit Panda, an expert with the Carnegie Endowment for International Peace.

Panda said the reference to a new ICBM appears to concern a solid-propellant system. “We should expect to see larger, solid propellant missiles tested soon,” he said.

Last month, North Korea said Kim supervised the test of a “high-thrust solid-fuel motor” for a new strategic weapon. Experts say the weapon refers to a solid-fuelled ICBM, which can be launched more quickly than a liquid-fuelled ICBM because the fuel in solid-propellant rockets is already loaded inside. All of North Korea’s previously tested ICBMs use liquid propellants.

Earlier Sunday, South Korea’s military detected a missile launch from the North’s capital region. The Joint Chiefs of Staff said in a statement the missile traveled about 400 kilometers before falling into the water between the Korean Peninsula and Japan.

The Joint Chiefs of Staff called the launch “a grave provocation” that hurts peace and security on the Korean Peninsula and around the world. It said South Korea closely monitors North Korean moves in coordination with the United States and maintains a readiness to overwhelmingly deal with any provocations.

The US Indo-Pacific Command said in a statement that the launch highlights “the destabilizing impact” of North Korea’s illegal weapons programs. It said US commitments to defend South Korea and Japan “remain ironclad.”

North Korea test-fired more than 70 missiles last year. The North’s testing spree indicated the country is likely emboldened by its advancing nuclear program, though whether the country has functioning nuclear missiles remains a source of outside debate.

North Korea’s state media confirmed Sunday that the country conducted test-firings of its super-large multiple rocket launcher to test the weapon’s capability. KCNA said three shells fired from the launcher on Saturday accurately hit an island target off the country’s eastern coast. It said North Korea fired another shell from the launcher towards its eastern waters on Sunday.

Kim Jong Un said the rocket launcher put all of South Korea within striking distance and is capable of carrying a tactical nuclear warhead, according to KCNA.

Outside experts categorize weapons fired from the launcher as ballistic missiles because of their trajectories, ranges and other characteristics.

The North’s missile launch for a second straight day came after South Korea on Friday conducted a rocket test related to its plan to establish space-based surveillance to better monitor North Korea. On Friday, South Korea’s military said it test-launched a solid-fuelled rocket, a type of a space launch vehicle that it plans to use to put its first spy satellite into orbit in coming years.

Animosities between the rival Koreas have deepened since early last week, when South Korea accused North Korea of ​​flying drones across the countries’ heavily fortified border for the first time in five years and sent its own drones toward the North.

South Korea acknowledged it failed to shoot down any of the five North Korean drones it said were found south of the border. But South Korea has vowed to bolster its air defense network and get tough on future provocations by North Korea.