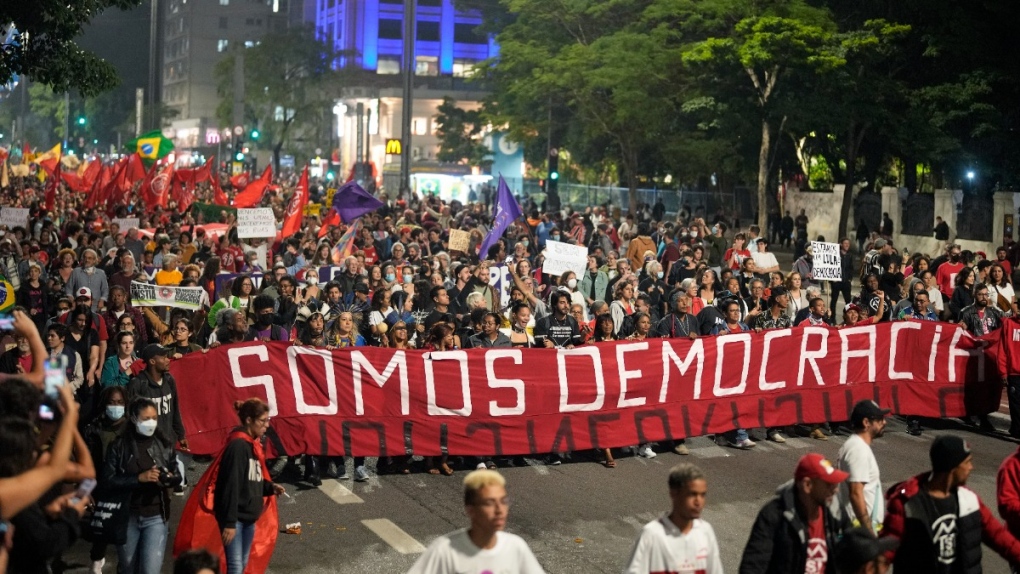 The chant reverberated off the walls of the jam-packed hall at the University of São Paulo’s law college on Monday afternoon. Within hours, it was the rallying cry for thousands of Brazilians who streamed into the streets of Rio de Janeiro and Sao Paulo, penning protest posters and banners.

The words are a demand for retribution against the supporters of former President Jair Bolsonaro who stormed Brazil’s capital Sunday, and those who enabled the rampage.

Protesters’ push for accountability evokes memories of an amnesty law that for decades has protected military members accused of abuse and murder during the country’s 1964-85 dictatorship. A 2014 truth commission report sparked debate over how Brazil has grappled with the regime’s legacy.

Declining to mete out punishment “can avoid tensions at the moment, but perpetuates instability,” Luis Felipe Miguel, a professor of political science at the University of Brasilia, wrote in a column entitled “No Amnesty” published Monday evening. “That is the lesson we should have learned from the end of the military dictatorship, when Brazil opted not to punish the regime’s killers and torturers.”

Brazilian police on Monday had already rounded up roughly 1,500 rioters. Some were caught in the act of trashing Brazil’s Congress, the Supreme Court and the presidential palace. Most were detained the following morning at an encampment in Brasilia. Many were held in a gymnasium throughout the day, and video shared on pro-Bolsonaro social media channels showed some complaining about poor treatment in the crowded space.

Hundreds of elderly and sick detainees were released Tuesday after they were questioned and had their phones inspected, local media O Globo reported. The Federal Police’s press office told The Associated Press that the force plans to indict at least 1,000 people. As of early afternoon, 447 people had been transferred to either a detention center or prison, according to a bulletin from the federal district’s penitentiary administration.

The administration of President Luiz Inacio Lula da Silva says jailing the rioters is only the start.

Justice Minister Flavio Dino vowed to prosecute those who acted behind the scenes to summon supporters on social media and finance their transportation on charges involving organized crime, staging a coup, and violent abolition of the democratic rule of law. Authorities are also investigating allegations that local security personnel allowed the destruction to proceed unabated.

“We cannot and will not compromise in fulfilling our legal duties,” Dino said. “This fulfillment is essential so such events do not repeat themselves.”

Lula signed a decree, now approved by both houses of Congress, ordering the federal government to assume control of security in the capital.

Far-right elements have refused to accept Bolsonaro’s electoral defeat. Since his Oct. 30 loss, they have camped outside military barracks in Brasilia, pleading for intervention to allow Bolsonaro to remain in power and oust Lula. When no coup materialized, they rose up themselves.

Decked out in the green and yellow of the national flag, they broke windows, toppled furniture and hurled computers and printers to the ground. They punched holes in a massive Emiliano di Cavalcanti painting at the presidential palace and destroyed other works of art. They overturned the U-shaped table where Supreme Court justices convene, ripped a door off one justice’s office and vandalized a statue outside the court. Hours passed before the police expelled the mob.

Cries of “No amnesty!” were also heard during Lula’s Jan. 1 inaugural address, in response to the president detailing the neglect of the outgoing Bolsonaro administration.

Bolsonaro, a former army captain, has waxed nostalgic for the dictatorship era, praised a notorious torturer as a hero and said the regime should have gone further in executing communists. His government also commemorated the anniversary of Brazil’s 1964 coup.

Political analysts had repeatedly warned that Bolsonaro was laying the groundwork for an insurrection in the mold of that which unfolded in the US Capitol on Jan. 6, 2021. For months, he stoked belief among hardcore supporters that the nation’s electronic voting system was prone to fraud — though he never presented any evidence and independent experts disagreed.

Results from the election, the closest since Brazil’s return to democracy, were quickly recognized by politicians across the spectrum, including some Bolsonaro allies, as well as dozens of other governments. The outgoing president surprised nearly everyone by promptly fading from view, neither conceding defeat nor emphatically crying fraud. He and his party submitted a request to nullify millions of votes, which was swiftly dismissed by the electoral authority.

None of that dissuaded his die-hard backers from their conviction that Bolsonaro should still be in power.

In the immediate aftermath of the riot, Lula said that the so-called “fascist fanatics” and their financial backers must be held responsible. He also accused Bolsonaro of encouraging the uprising.

Bolsonaro denied the president’s accusation Sunday. Writing on Twitter, he said peaceful protest is part of democracy, but vandalism and invasion of public buildings cross the line.

Authorities are also investigating the role of the federal district’s police in either failing to halt protesters’ advance or standing aside to let them run amok. Prosecutors in the capital said local security forces were negligent at the very least. A supreme court justice temporarily suspended the regional governor, who oversees the force, for what he termed “willful omission”. Another justice blamed authorities across Brazil for not swiftly cracking down on “homegrown neo-fascists.”

The upheaval finally prompted municipal and state governments to disperse the pro-Bolsonaro encampments outside the military barracks. Their tents and tarps were taken down, and residents were sent packing.

Meanwhile, pro-democracy protesters want to ensure their message — “No amnesty!” — will be heeded by both the law enforcement authorities and any far-right elements who might dare defy democracy again.

“After what happened yesterday, we need to go to the street,” said Marcos Gama, a retiree protesting Monday night in Sao Paulo. “We need to react.”