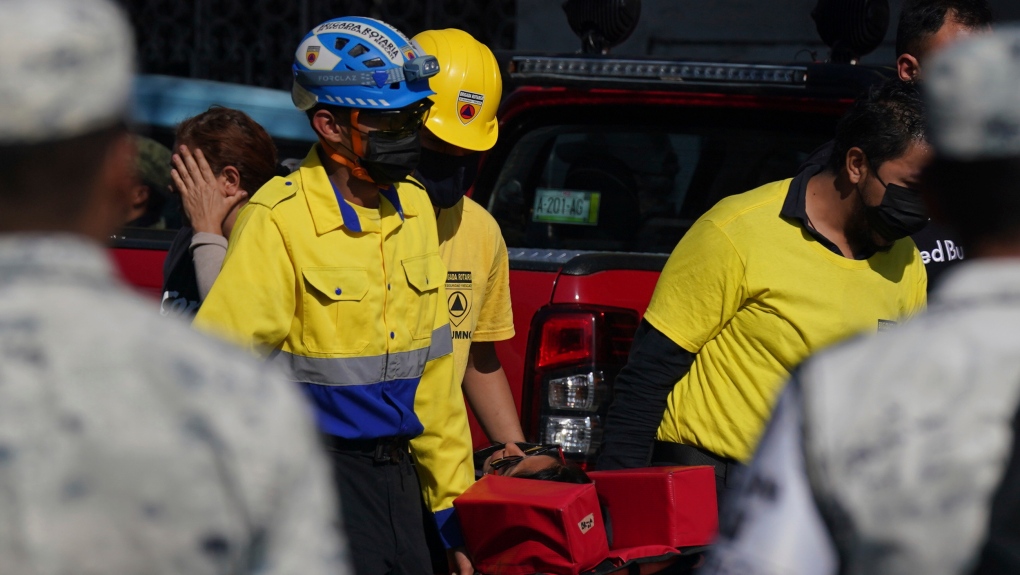 The mayor of Mexico City announced Thursday that 6,060 National Guard officers will be posted in the city’s subway system after a series of accidents that officials suggested could be due to sabotage.

Mayor Claudia Sheinbaum said mechanical problems in recent months may have been due to “not normal” causes. She appeared to suggest, but did not say, that it could involve some form of sabotage.

“In recent months, incidents have been occurring that we categorize as not normal,” Sheinbaum said, adding that she had asked President Andres Manuel Lopez Obrador to dispatch the quasi-military National Guard and he agreed.

The mayor said Guard officers would be posted at subway stations “and some other facilities” in the system and would be there “for a few months.”

She did not explain how the Guard officers, mostly drawn from the military and assigned to law enforcement, could help control a situation that appears to be caused by maintenance, design or operational flaws.

Mario Alberto Hernandez, the head of one of the city’s 195 subway stations, said that “this decision is more about politics than anything that would be useful here.” He described the system’s lack of spare parts as so severe that “they are cannibalizing old, discarded trains to get spare parts.”

The move also touched on the national debate over Lopez Obrador’s habit of relying on the military for everything from law enforcement to infrastructure construction projects.

The Miguel Agustin Pro Juarez human rights center said the announcement “is concerning, because it is obvious that this agency reproduces the military’s problems with a lack of transparency and excessive use of force.”

The subway system said the officers would not be armed, but Internet users wondered whether adding 6,000 more bodies to the mix would worsen the severe crowding often seen in the city’s trains and subway platforms.

Accidents on the subway have been a recurring embarrassment for Sheinbaum, who is considered the most likely candidate of Lopez Obrador’s Morena party to succeed him in the 2024 elections. Like the president, Sheinbaum often ascribes setbacks to a conservative conspiracy against her.

Lopez Obrador was somewhat more specific, saying the Guard would be there to prevent “provoked,” or intentional accidents.

“What we want is for there not to be psychosis, for people not to have to worry about some accident in the subway, and that it could have been provoked,” the president said.

“If they call that militarization or whatever, then we will take responsibility for that,” he said.

The latest accident came Saturday, when two subway trains collided while between stations, killing one person and injuring dozens. Local media reported there had previously been signaling problems on that stretch of track.

In May 2021, an elevated section of the subway system collapsed, causing 26 deaths and injuring nearly 100 people. An investigation blamed deficiencies in construction, and 10 former officials have been charged with a form of manslaughter, injury and damage to property, but none have been jailed.

Poor welding, a lack of maintenance, antiquated electronic systems and the city’s frequent earthquakes and soft soil conditions have all been blamed in the past for problems on the subway, but sabotage has never before been seen as a cause.

But in the last several days, Sheinbaum said, there had been three “not normal” problems found on subway cars or tracks, including the failure of a tire “that had just been inspected.” The city’s subway cars run on both tires and rails.

Subway riders were skeptical about sending the National Guard into the largely underground subway system.

Manuel Alejandro, a clothing and sneaker vendor who rides the subway almost every day, said, “The National Guard isn’t going to solve anything … it would be better to give the subway the periodic maintenance it needs.”

“It stops a lot, the lights go off,” Alejandro said of the trains. “It seems like they are looking for excuses.”

Tarcisio Montano, a building maintenance worker who generally supports Lopez Obrador and his anti-poverty programs, said some of the criticism of subway problems is an attempt by political rivals “to smear the government.”

But Montano also acknowledged the system is underfunded and poorly maintained. “Where does all the money from the tickets go?” he asked.

And he, too, saw no need for the National Guard. “They are there to defend the country, not to keep watch for you on the subway,” he said.

On Thursday, the officers seemed to be simply strolling or standing at the platforms or stations.

Mexico City’s subway system has 226.5 kilometers (141 miles) of track and 195 stations. It serves an average of 4.6 million passengers every day. With tickets costing the equivalent of 25 cents, it is also one of the cheapest subways in the world and has suffered from insufficient budgets for years.

The tech publication “Rest of World” reported this week that current and former subway workers say the subway system’s communication network is so bad that they must rely on messaging apps on their cellphones to keep in touch between train operators and avoid accidents.

In 2021, a fire in the antiquated control center of the subway system killed one person and sent 32 others to the hospital, while knocking out service on half of the subway lines in the city of 9 million inhabitants. Some of the technology at the control center appeared to be 1970s-era analog equipment.

Subway workers have complained for years of underfunding.

Juan Carlos Hernandez Gonzalez, the head of another subway station, said “the National Guard isn’t useful for anything right now, what is lacking is maintenance,” adding “the drivers get on the trains and pray to God there won’t be problems.”

Some people questioned whether it was the best use of the National Guard, given the persistent drug cartel violence in Mexico. The Guard has an operational force of about 106,000 officers nationwide. As of Thursday, more officers were assigned to the Mexico City subway than to 29 of Mexico’s 32 states, some of them highly violent.

Lilly Tellez, a senator from the conservative opposition National Action Party, wrote in her social media accounts that “there are areas of Mexico without a single National Guard officer, and today they are going to send 6,000 into the metro, to satisfy a paranoia about sabotage.”