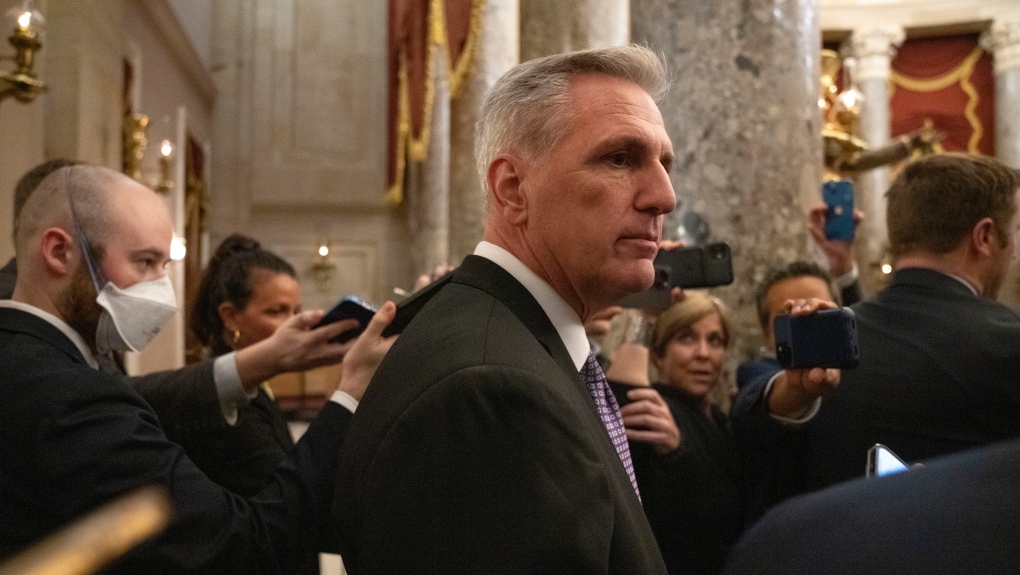 Pressure mounting, the speaker’s chair of the US House sat empty for a third day Thursday, as Republican leader Kevin McCarthy failed anew on the seventh of an excruciating string of ballots to win enough votes from his party to seize the chamber’s gavel.

One of McCarthy’s steadfast critics, Rep. Matt Gaetz of Florida, even cast his vote for Donald Trump, a symbolic gesture, but one that highlighted the former president’s influence over the Republican Party.

The seventh vote for speaker turned out no different from the others, with McCarthy well short of the required majority.

McCarthy emerged from a morning meeting with colleagues at the Capitol determined to persuade Republican holdouts to end the stalemate that has blighted his new GOP majority.

Despite endless talk, signs of concessions and a public spectacle unlike any other in recent political memory, the path ahead remained highly uncertain. The day started as the other two have, with Republican allies nominating him for now a seventh time to be speaker.

Republican John James of Michigan put McCarthy’s name up for a vote, with a nod to history.

“My family’s gone from being slaves to the floor of the United States House of Representatives” in five generations, said James, a newly elected lawmaker to be, who is Black.

He said that while the House Republicans were “stuck” at the moment, McCarthy, who has failed to seize a majority to become speaker, would ultimately win.

Democrat Hakeem Jeffries of New York was re-nominated by Democrats.

Donalds, who is Black, is seen as a future party leader and counterpoint to the Democratic leader, Jeffries, who is the first Black leader of a major political party in the US Congress, on track himself to become speaker someday.

“We could have elected the first Black speaker of the United States House,” said conservative Republican Dan Bishop of North Carolina who re-nominated Donalds on Thursday.

Democrats jumped to their feet in applause, as Jeffries is, in fact, closest to the gavel with the most votes on every ballot so far.

What started as a political novelty, the first time in 100 years a nominee had not won the gavel on the first vote, has devolved into a bitter Republican Party feud and deepening potential crisis.

McCarthy is under growing pressure from restless Republicans, and Democrats, to find the votes he needs or step aside, so the House can fully open and get on with the business of governing. His right-flank detractors appear intent on waiting him out, as long as it takes.

“We’re having good discussions and I think everyone wants to find a solution,” McCarthy told reporters shortly before the House was prepared to givel into session again.

House Chaplain Margaret Kibben opened the day’s session, perhaps the last of the week, calling on greater powers to “still the storms of dissent.”

The House, which is one-half of Congress, is essentially at a standstill as McCarthy has failed, one vote after another, to win the speaker’s gavel in a grueling spectacle for all the world to see. The ballots have produced almost the same result, with 20 conservative holdouts still refusing to support him and leaving him far short of the 218 typically needed to win the gavel.

In fact, McCarthy saw his support slipping to 201, as one fellow Republican switched to vote simply present.

“I think people need to work a little more,” McCarthy said Wednesday as they prepared to adjourn for the night. “I don’t think a vote tonight would make any difference. But a vote in the future could.”

As the House resumed at noon Thursday it could be a long day. The new Republican majority was not expected to be in session on Friday, which is the anniversary of the Jan. 6, 2021, attack on the Capitol. A prolonged and divisive speaker’s fight would almost certainly underscore the fragility of American democracy after the attempted insurrection two years ago.

“All who serve in the House share a responsibility to bring dignity to this body,” California Democrat Nancy Pelosi, the former speaker, said in a tweet.

Pelosi also said the Republicans’ “cavalier attitude in electing a Speaker is frivolous, disrespectful and unworthy of this institution. We must open the House and proceed with the People’s work.”

Some Republicans appear to be growing uneasy with the way House Republicans have taken charge after the midterm elections only to see the chamber upended over the speaker’s race in their first days in the new majority.

Colorado Republican Ken Buck voted for McCarthy but said Wednesday that he told him “he needs to figure out how to make a deal to move forward” or eventually step aside for someone else.

McCarthy has vowed to fight to the finish for the speaker’s job in a battle that had thrown the new majority into tumult for the first days of the new Congress.

The right-flank conservatives, led by the Freedom Caucus and aligned with former president Donald Trump, appeared emboldened by the standoff — even though Trump publicly backed McCarthy,

“This is actually an invigorating day for America,” said Florida Republican Donald, who was nominated three times by his conservative colleagues as an alternative. “There’s a lot of members in the chamber who want to have serious conversations about how we can bring this all to a close and elect a speaker.”

The disorganized start to the new Congress pointed to difficulties ahead with Republicans now in control of the House, much the way that some past Republican speakers, including John Boehner, had trouble leading a rebellious right flank. The result: government shutdowns, standoffs and Boehner’s early retirement.

A new generation of conservative Republicans, many aligned with Trump’s Make America Great Again agenda, want to suspend business as usual in Washington, and were committed to stopping McCarthy’s rise without concessions to their priorities.

But even Trump’s strongest supporters disagree on this issue. Colorado Republican Lauren Boebert, who nominated Donalds a second time, called on the former president to tell McCarthy, “Sir, you do not have the votes and it’s time to withdraw.”

By McCarthy’s own calculation, he needs to flip about a dozen Republicans who have so far withheld their backing as he presses on for the job he has long wanted.

To win support, McCarthy has already agreed to many of the demands of Freedom Caucus members, who have been agitating for rule changes and other concessions that give rank-and-file members more influence.

Mostly, the holdouts led by the Freedom Caucus are seeking ways to shrink the power of the speaker’s office and give rank-and-file lawmakers more influence in the legislative process — with seats on key committees and the ability to draft and amend bills. a more free-for-all process. McCarthy conceded to some changes in a Rules package released over New Year’s weekend, but for some it didn’t go far enough.

Those opposing McCarthy do not all have the same complaints, and he may never be able to win over some of them. A small core group of Republicans appear unwilling to ever vote for McCarthy.

“I’m ready to vote all night, all week, all month and never for that person,” said Florida Republican Gaetz.

Not since 1923 had a speaker’s election gone to multiple ballots. The longest fight for the gavel started in late 1855 and dragged on for two months, with 133 ballots, during debates over slavery in the run-up to the Civil War.