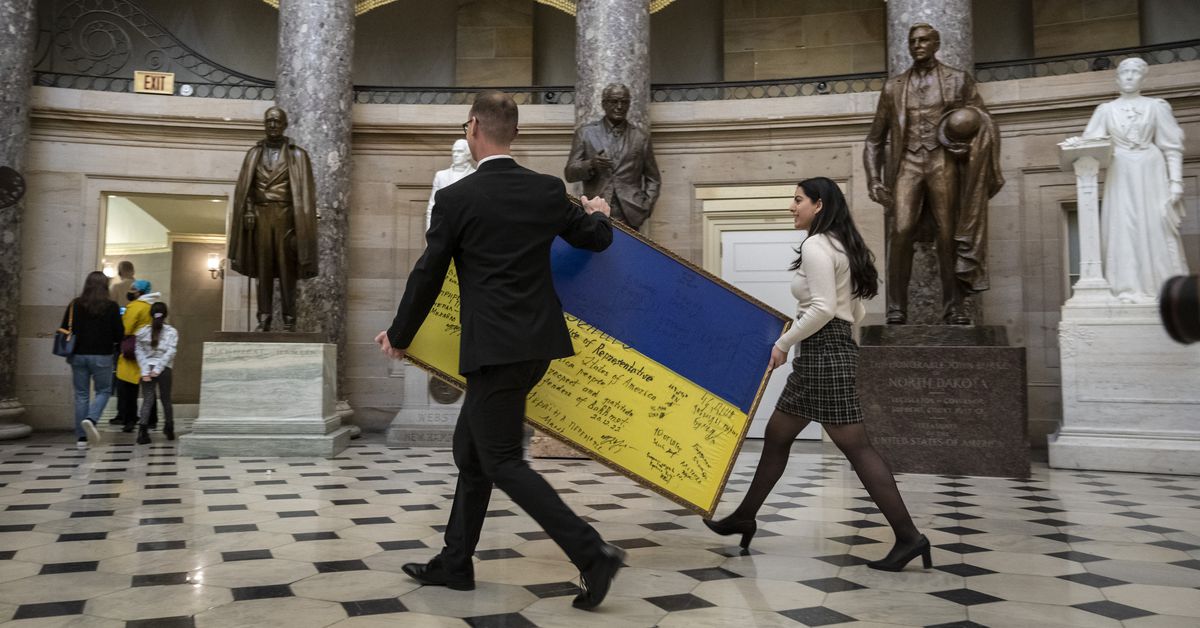 The new conservative House of Representatives has taken power and is ready to take on President Joe Biden and his foreign policy.

As part of the deals that emerged as Rep. Kevin McCarthy persevered through 15 rounds of votes to secure the speakership last week, a group of 20 far-right lawmakers reportedly won concessions to cap the federal budget at 2022 levels in exchange for agreeing to raise the debt ceiling. If McCarthy’s caucus does follow through on that, it would put the gargantuan military budget— $817 billion of the $1.7 trillion federal budget this fiscal year—under the microscope. It could lead to significant cutsperhaps up to $75 billion,

That may be unlikely for many reasons, particularly the bipartisan consensus on the threat of China. The Republican House committee chairs tasked with national security are certain to push back against calls to slash defense spending, even if it means confronting members of their own party, and both parties are eager to avoid the defense cuts triggered by the 2013 debt ceiling crisis. But the proposaland the backlash to it, say a lot about how Washington is thinking about its role in the world, and how the new GOP House majority might add its own flavor of oversight to Biden’s statecraft.

Republicans are also entering Congress with some members pushing for more scrutiny of US policy toward the Ukraine war, which has included about $50 billion of military and financial assistance to Kyiv. McCarthy had brought attention to that.blank checkin November. His criticisms may have been the impetus for Ukrainian President Volodymyr Zelenskyy’s surprise Washington visit just before Christmas, to reinforce support for his country in advance of the Republican takeover. Despite Zelenskyy’s appeal to Americans, polling shows that Republican voters are increasingly skeptical of continuing aid in perpetuity as the war approaches its one-year mark.

Now, members of the ultraconservative House Freedom Caucus that, after much jockeying, allowed McCarthy to clinch the speakership are trying to express a clear message on national security. “We can be both a budget hawk and a defense hawk,” Rep. Chip Roy (R-TX) said on the The Hugh Hewitt Show, “I support us going to absolute war, so to speak, to make sure that our defense is strong enough and our country is strong enough to take on China. But look, we have to do it responsibly and we haven’t been. We’re letting the swamp beat us. We’re letting the swamp set the terms.”

But looking ahead, defense cuts seem aspirational. Roy himself has disavowed them. And the staying power of the Republican Party’s leadership in key House committees, namely the many Mikes — Rep. Mike D. Rogers on Armed Services, Rep. Michael McCaul on Foreign Affairs, Rep. Mike Bost on Veterans Affairs, and Rep. Mike Turner on Intelligence — as well as the Biden White House’s own position, cannot be understated. “This push to defund our military in the name of politics is senseless and out of line with our national security needs,” White House spokesman Andrew Bates said.

Or as one senior Democratic aide, speaking on the condition of anonymity, texted me, “There’s waaaaay too many hawks on their side. And for that matter on our side.

The hawkish consensus around the threat of China is a primary reason that cuts to the military budget are highly improbable.

Andrew Lautz, a policy director at the National Taxpayers Union, says that, even without compromising US national security, big cuts are possible on outdated military programs.

But he is pessimistic that those would happen in the near future and pointed out how quickly Republican leaders, even some of the holdouts that McCarthy negotiated with, are starting to disputes the notion that defense cuts have ever been on the table. And so-called Reagan Republicans Want to see a bigger budget to counter China.

“The solution is always more spending,” Lautz told me. “I don’t think we will, anytime in the next two years, see meaningful cuts to the defense budget happening through the appropriations process.”

A second reason for the unlikelihood of significant defense budget cuts is the mess that unfolded. in 2013, when debt ceiling negotiations led to the complex wrangling of a congressional super-committee and a sequestration process mandated, across-the-board defense budget cuts that the military and lawmakers of both parties hated,

No one wants to repeat what happened with knock-on effects of the Budget Control Act of 2011. “Congress has to be a critical partner in resourcing the military and it must be done through a predictable process that allows for discussion, debate, and careful decision-making,” Joseph Votel, a retired general who is now president of the nonprofit trade group Business Executives for National Security, wrote in an email. “What appears to be happening now does not reflect any of those qualities.”

A third reason: The political energy that might go into pushing for a military budget cut is likely to be channeled into probing the utility and the limits of US aid to Ukraine,

Since 2021, the Biden administration has provided almost $25 billion of military aid to Ukraine as well as $24 billion in financial and humanitarian assistance. There are right-wing voices who support the aidand progressives too see the importance of maintaining aid to beat Russia’s invasion even if it comes at the expense of empowering military contractors, National security officials argue staunchly in favor of it. “We need to make sure that we hold together the political support here,” said former acting CIA director Michael Morell, who is currently a consultant at Beacon Global Strategies, said recently.

Even if that aid continues, House Republicans are likely to expand oversight. Republican concerns about the US public debt, longstanding worries about corrupt practices in Ukraine that could lead to difficulty in monitoring the use of weapons, and the aid’s effect on the US’s own national security, will all likely be raised in hearings.

The US is sending so many weapons to Ukraine that supply chains are strained and stockpiles have been exhausted, “Our current policy toward Ukraine is just not sustainable financially and in terms of what we are actually giving Ukrainians,” says Dan Caldwell, vice president for foreign policy at the conservative organization Stand Together. “You can’t indefinitely provide the types of support we’re doing. We’re running out of ammunition to give them, we’re running out of certain types of equipment to get them.”

Not all Republicans agree. “The people who want to cut Ukraine aid are probably in the minority. I think often when you’re in the minority, you maybe speak louder, because you want to be heard,” says Mira Ricardel, a former deputy national security adviser during the Trump administration.

Even those who support Ukraine’s defense say that renewed congressional attention will be positive. Ricardel, who now works at the Chertoff Group consultancy, says that oversight will force the White House to sharpen its thinking. “The beauty of having two branches of government working on this particular matter [is] it forces you to articulate what you stand for, why, and how you are going to do things and to defend them,” she told me.

The defense budget might not change, but there is a growing group of lawmakers pushing for it nonetheless.

White House spokesman Andrew Bates says there is “bipartisan opposition” to military budget cuts — but there is also bipartisan support.

A loose coalition of Republicans and Democrats has been calling for a more restrained and realistic US foreign policy. It’s not an organized cohort by any means. Some push for views that might be called isolationist. Others have voted for aid to Ukraine, just continuing to advocate for a negotiated end to the war, What unites them is their criticism of some of the articles of faith of US foreign policy that have led to an over-reliance on military force abroad.

The Koch-backed nonprofit Stand Together, where Caldwell is an executive, supports many think-tank experts who are pushing for a rethink of such entrenched policies. “We have seemingly unstoppable growth in the defense budget that is not tied to a realistic strategy,” he told me. “The only way that you can realistically reduce defense spending is by effectively changing America’s grand strategy.”

The military budget has been growing—by 4.3%, adjusted for inflation, over the past two years. Rep. Mike Rogers, who will chair the influential House Armed Services Committee, has advocated for increases of up to 5 percent each year.

Though in so many senses the US is more polarized along partisan lines than ever, progressives and far-right Republicans at times agree that the military budget is inflated and wasteful. It’s not clear they agree about enough else on national security to challenge the status quo.

Many former senior Trump administration officials have decamped to the America First Policy Institute. The organization notes that “maintaining a strong military is not exclusively about having a large top-line budget,” though some of its suggestions for cuts would make progressives bristle, like eliminating “non-military issues such as climate change and democracy promotion from military doctrine and defense policies.” (Though many progressives would agree with the feelings of ending the “use of military or tax dollars for nation building.”)

It’s also not clear what role the so-called rebel wing of the Republican Party will play in the House. As the backroom negotiations that brought McCarthy the speakership become clearer, the experts I spoke with told me that defense budget cuts seem unlikely — a sign that the disruption could reach its limit here.

Nevertheless, the mainstream discussion presents an opportunity to consider how massive spending outlays on the US military reflect the inertia of military adventurism that followed the September 11, 2001, attacks, bolstered by the entrenched financial interests of the military-industrial complex.

Interestingly, it is Hewitt, the right-wing talk show host, who said the House rebels’ messaging was too muddled. On his programme, he pushed Rep. Chip Roy to articulate more clearly how Republicans can be China hawks while limiting the debt. The answer didn’t offer much: “We must end woke and weaponized government, and stop funding bureaucrats that are engaged in tyranny over the American people,” Roy replied, “We can have a strong national defense, we can beat up DOD to be non-woke, go find savings, and then stretch and increase what we need to beat China.”