The gigantic tunnels and bridges linking Asia to Europe 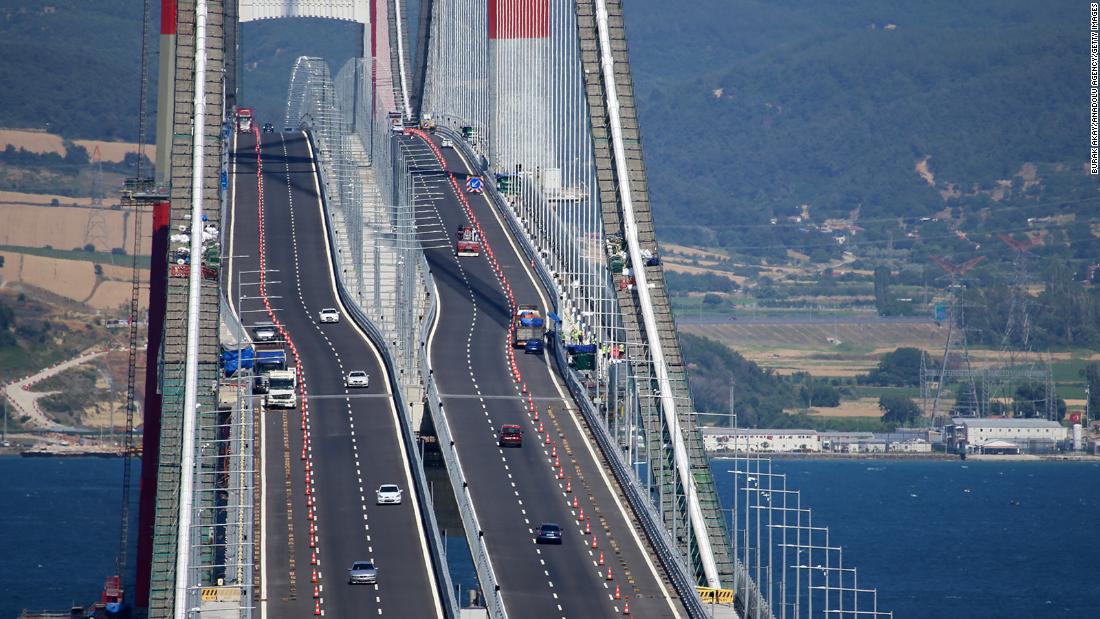 Istanbul (CNN) — With sloping banks studded with elegant private mansions, palace parks and centuries-old groves, the Bosphorus is the embodiment of Istanbul.

This 19-mile (30-kilometer) strait runs from the Black Sea in the north to the Sea of ​​Marmara in the south.

The urban sprawl covers Europe in the west and Asia to the east, geographical facts giving rise to the romantically evocative but somewhat fanciful description of Istanbul as a city that straddles two continents.

Technically it does, but the Bosphorus isn’t the city’s only waterway. Just before it meets the Sea of ​​Marmara, the Golden Horn — known locally as Haliç — branches off northwest. It eventually peters out inland unlike the Sea of ​​Marmara, which leads to the Aegean Sea via the narrow Dardanelles Strait.

Day and night, tankers and container ships are visible along the horizon near the Princess Islands, patiently waiting their turn to pass along the shipping route.

Richard Quest rediscovers the essence and energy of an iconic Turkish city that engages all the senses while offering up places of quiet beauty.

Similarly, Istanbul residents wait too, in cars, on buses, trains and ferries. According to 2021 figures, just shy of 16 million people reside in Istanbul. Many live on one side of the city and work on the other, meaning at any one time a large swathe of the population is on the move.

Navigating the city’s tangled road map can be chaotic at any time of day and sometimes it feels like it’s a wonder that anyone gets anywhere, but they do — making use of road, rail, ship, bridge and tunnel to cross from one continent to another.

15th July Martyrs Bridge was the first to span the Bosphorus.

Before it opened on October 29, 1973, the 50th anniversary of the Turkish Republic, the only way to cross from Europe to Asia in Istanbul was by ferry.

The elegant new 1,560-meter (5,118 feet) steel suspension bridge allowed drivers to pass high above the swiftly running waters of the Bosphorus and enjoy sweeping views across to Topkapi Palace and out to the Sea of ​​Marmara in the distance.

In its early days, the bridge attracted walkers who wanted a vantage point to admire the stately white brilliance of the 19th century Büyük Mecediye Mosque down on the water’s edge in Ortaköy.

These days the bridge is only open to pedestrians one day a year when thousands sign up to run the Istanbul Marathon. The rest of the time drivers pay less than 50 cents to cross.

The second bridge linking both continents opened on July 3, 1988 and was named for Fatih Sultan Mehmet, aka Mehmet the Conqueror. He’s the guy who rode into town in 1453 and established Ottoman rule in Constantinople, then capital of the Byzantine Empire.

Sometimes called FSM Köprüsü, it’s another gravity-anchored steel suspension bridge similar in length to the First Bridge and costing a similar toll fee to use.

It spans the narrowest point of the Bosphorus strait, where Persian King Darius I was said to have built a floating bridge in 512 BCE.

The traffic deck of the modern incarnation hangs around 200 feet above the water and connects Hısarüstü in the west to Kavacık in the east.

It provides spectacular views over the Bosphorus but no pedestrian access is allowed so only drivers get to appreciate them, a welcome distraction when stuck in weekend midnight traffic jams.

In 2016, a third suspension bridge opened up across the Bosphorus, near the Black Sea. This one is named for Yavuz Sultan Selim, grandson of Mehmet the Conqueror and an apt choice given his interest in transport. The 16th-century sultan rebuilt the Ottoman fleet and Haliç Tershanesi, the Golden Horn shipyards.

On completion, the bridge broke numerous records. With a 58.8-metre-wide single deck slab, it is the world’s widest suspension bridge, capable of carrying eight lanes of traffic and a double-track railway line. It is also the world’s fifth tallest bridge, rising over 322 metres.

The bridge, designed for use by trucks and long-distance traffic heading to central Anatolia and beyond, offers drivers a view for miles out to the Black Sea on clear days and levies a basic car toll of around $1.

The 1915 Canakkale Bridge has the world’s longest suspension bridge span.

The newest route to span the two continents is the impressive Çannakale 1915 Köprüsü, stretching between Gelibolu on the European side of the Dardanelles to Lapseki over in Asia.

The structure soars across the Straits and replaces a one-hour ferry crossing (that in reality can take up to five hours with waiting time) with a six-minute drive at the 50 miles per hour limit.

Designed for speed rather than views, it’s less popular with locals due to a toll of nearly US$11 per car.

The bridge opened on March 18, 2022, commemorating the day in 1915 that Turkey was victorious over the Allies in a battle to take control of this vital waterway.

The Eurasia Tunnel is one of the fastest ways across the Bosphorus.

The 5.3-kilometer (3.3 mile) underwater section of the Eurasia Tunnel (Avrasya Tüneli in Turkish) is a big drawcard for fans of engineering, but the tunnel’s main appeal is being the fastest way to get from one side of Istanbul to the other.

It’s functional rather than beautiful, with a speed limit of 70 kilometers per hour. Part of a longer nine-mile road link connecting Kazlıçeşme in Europe to Göztepe in Asia, on completion in December 2016 it reduced travel time from 100 minutes to just 15.

The tunnel, which has a fee of about $2.85 per car, also became the most practical link between the city’s two airports, Atatürk and Sabiha Gökçen until commercial flights were relocated from Atatürk Airport to the mammoth Istanbul Airport, more than 27 miles northwest of central Istanbul’s Taksim Square.

With a fee of about $2.85 per car, the Eurasia Tunnel is the most expensive way to cross the Bosphorus.

As with the bridge crossings, toll payments are collected via the Hızlı Geçiş Sistemi. Called HGS for short, this system uses special windscreen stickers that are automatically scanned when vehicles pass through toll gates.

It’s important to have enough credit in your account to cover charges, especially if you’re planning to drive across a border. Unpaid fines means don’t pass go! Don’t worry though. There’s a handy app you can download to track credit and usage.

Construction began on the Marmaray tunnel in 2013.

This underground, intercontinental train service was a long time coming. In 1860, Sultan Abdülmecid I came up with the idea for an undersea crossing in the strait, but died before he could do anything about it.

Another sultan, Abdul Hamid II, was interested when French engineers proposed it to him in 1892, but there was no progress.

More than a hundred years later interest resurfaced and construction on the 13.6 kilometer tunnel started in 2004.

Despite the best of intentions, the rail service didn’t open until October 29, 2013. Deadlines were pushed back when almost every meter dug revealed archaeological finds, some dating back 8,000 years.

It was another six years before all the stations along the line were ready for use.

The tunnel connects Kazlıçeşme on the European side to Ayrılık Çeşmesi on the Asian side, descending up to 200 feet below sea level at its lowest point, making it the world’s deepest immersed tunnel.

All that travelers need in order to take the Marmaray is an Istanbul Card (Istanbul Kart). Available at all major public transport hubs and small kiosks throughout the city, it allows the bearer to hop on and off all modes of public transport at will.

Ferries are perhaps the most atmospheric way to cross the Bosphorus.

They’re not the fastest way to travel between the continents, but there are few travel experiences better than being on a ferry crossing over the Bosphorus.

Feet up on the railing and the wind in your hair, watch the minareted skyline of Istanbul slide by while taking a sip of piping hot Turkish tea and a bite of simit, a sesame seed covered ring of sourdough.

The Şehir Hatlar Vapuları (City Lines’ Ferries) were established in 1844 during the Ottoman Empire. As well as crisscrossing and running the length of the Bosphorus, their ferries sail the Sea of ​​Marmara, the Golden Horn and over to the Princes’ Islands.

They also carry cars and passengers on the short trip between Sirkeci and Harem, and on longer journeys to Bursa, Yalova and Mudanya.

Ferries are the epitome of atmosphere and style when it comes to public transport in Istanbul, unlike the buses.

Sure, buses go absolutely everywhere, including one route that covers 63 miles over 78 stops, but they are often uncomfortably crowded and frequently stuck in traffic.

Yet they have one thing in common with the ferries — neither of them continue through the night. If you’re looking for a fast, economical way to get from one side of the Bosphorus to the other in the wee hours, late night minibuses are the way to go.

Shared minibuses in Istanbul are a close cousin of the dolmuş, small privately run buses which travel set routes like normal buses, but pick up and set down passengers as requested.

Both operate on a cash basis. Dolmuş take their name from the word meaning stuffed in Turkish. How many passengers they carry depends on the number of bodies they can squeeze in (a lot, in case you’re wondering) while yellow minibuses only take as many people as there are seats.

After a night out on the European side of town, partygoers head to the minibus stop in Taksim Square. Most of the drivers seem to have Formula One aspirations, so as soon as they’re full it’s usually pedal to the metal making for a quick trip home.

Lisa Morrow is a freelance writer and sociologist living in Istanbul, Turkey. Her writing has been published in The New York Times, Guardian UK, BBC Travel, World Nomads, Fodors and Hyperallergic. She’s also the author of four books, the latest being “Longing for Istanbul: The Words I Haven’t Said Yet.”