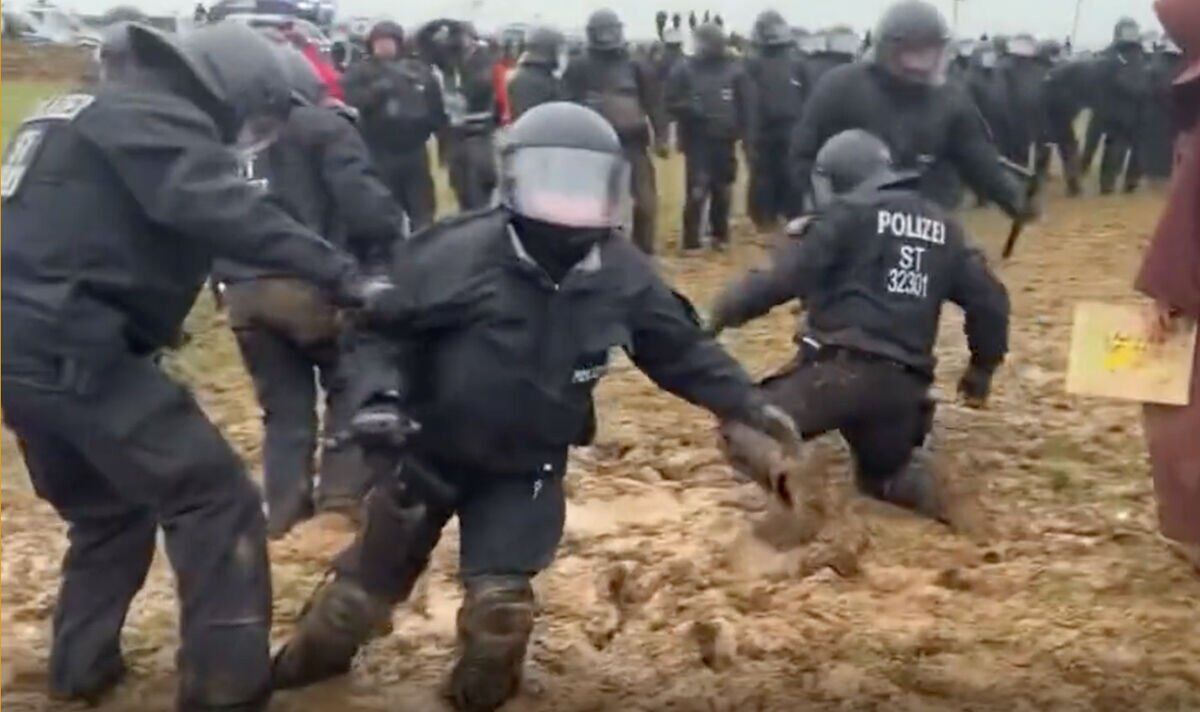 German riot police have managed to get themselves stuck in the mud during a stand-off with eco-activists in the village of Luetzerath in the state of North Rhine-Westphalia. Footage shared on social media shows officers struggling to free one another and themselves from the deep mud.
It comes as around 6,000 demonstrators, including Swedish climate change activist Greta Thunberg, gathered in western Germany to protest the expansion of a controversial coal mine.

Protesters marched through Keyenberg, close to the demolished village of Luetzerath, chanting: “Every village stays” and “You are not alone”.

Ms Thunberg told demonstrators: “This is a betrayal of present and future generations… Germany is one of the biggest polluters in the world and needs to be held accountable.”

She was seen marching with protesters holding a sign saying “Luetzi stays” in German, using a shortened name of the village.

On Wednesday, more than 1,000 officers in riot gear descended on the area to begin clearing barricades erected by protesters.

On Thursday, a buildings in the village was cleared by police, with bulldozers swiftly moving in to cut down trees and remove debris.

By Friday afternoon, authorities said there were no longer any activists in the remaining buildings or on their roofs.

But things appeared to have taken a step backwards over the weekend.

German news agency dpa reported on Saturday that there were 15 “structures” such as tree houses that were yet to be tackled, as well as a tunnel in which two people were believed to still be

The village of Lützerath in Germany is currently the site of a climate protest against the demolition of the village to expand a nearby coal mine near the Dutch border.

Activists are fighting to save the village, which is currently occupied by them and they believe that the demolition of the village is unnecessary as the continued use of coal is harmful to the environment and climate change and that the country should shift to cleaner forms of energy

According to Dina Hamid, one of the activists: “The climate crisis is now, and we know that coal should have been stopped years ago.

“Lützerath is likely to be the last German village lost to a coal mine.”