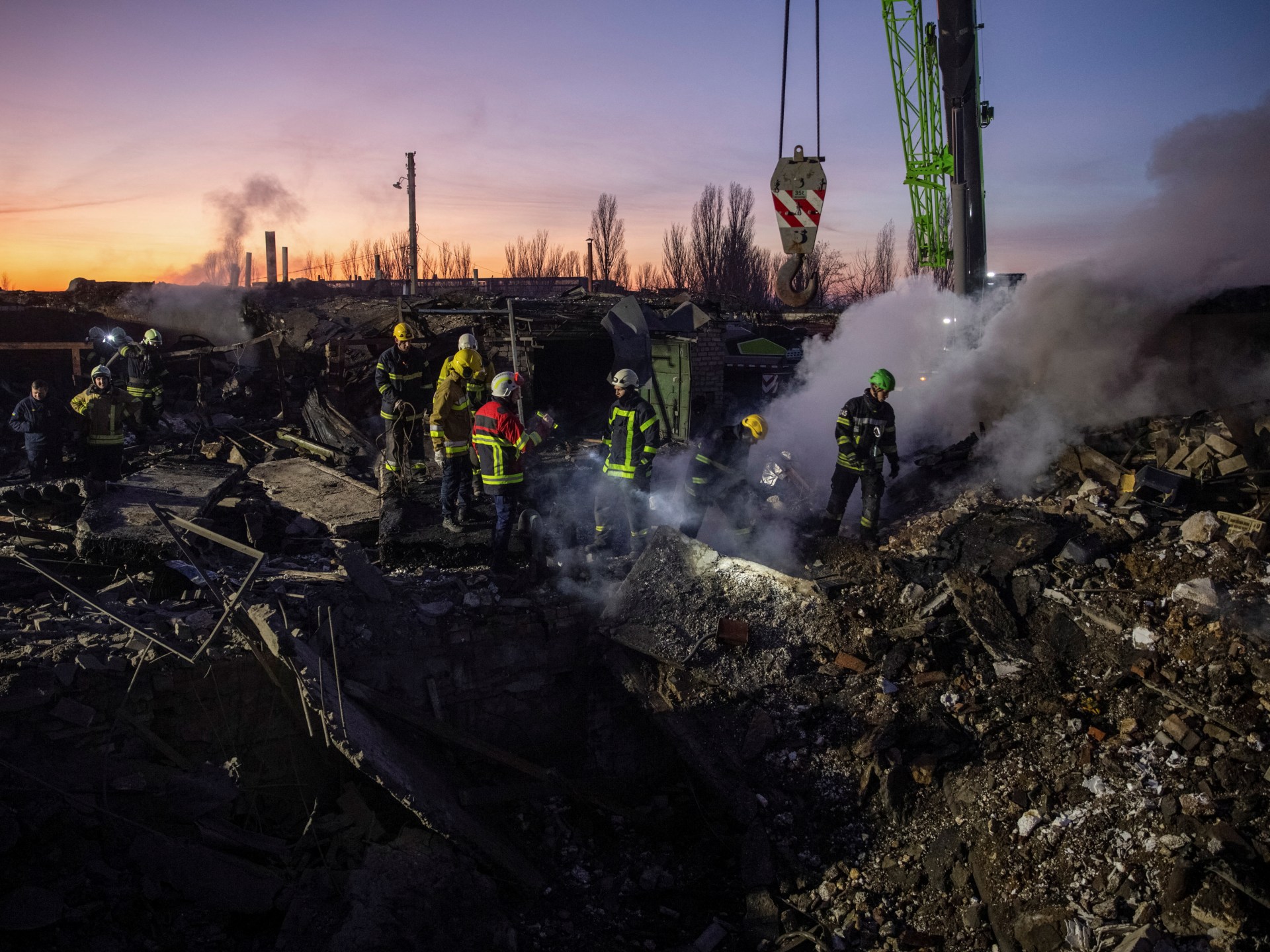 The attacks on Kyiv on Sunday followed a barrage of at least 20 cruise missiles fired at targets across Ukraine in what officials there called “Terror on New Year’s Eve”.

The new assault set off air raid sirens across the country, and some people in Kyiv took to their balconies shouting “Glory to Ukraine! Glory to the heroes”.

Kyiv’s Mayor Vitali Klitschko said on Telegram that the first blasts of the new year began roughly 30 minutes after midnight, hitting two districts. He said there were no immediate reports of casualties.

The city military administration said that 23 Russian-launched “air objects” had been destroyed and that air defense systems were working.

Earlier in the evening, President Volodymyr Zelenskyy said Ukrainians would fight until victorious in the war that is now in its eleventh month.

“We fight and will continue to fight. For the sake of the key word: ‘victory’,” he said in the emotional address. “I want to say to all of you: Ukrainians, you are incredible! See what we have done and what we are doing!”

“We fight as one team — the whole country, all our regions. I admire you all. I want to thank every invincible region of Ukraine,” he added.

The earlier round of attacks on Kyiv damaged the Hotel Alfavito and a residential building, killing at least one person and wounding at least a dozen others. Klitschko said a Japanese journalist was among the wounded and was taken to a hospital.

Filmmaker Yaroslav Mutenko, 23, who lives in an apartment complex near Hotel Alfavito, said he was in the shower preparing to go to a New Year’s Eve party when he heard a boom. He said there had been similar explosions in the area during a previous attack in October, but nothing as loud as Saturday’s explosion.

As he watched rescue workers cordon off the street in front of the hotel, he told the AFP news agency that he still planned to go to the party at a friend’s house.

“Our enemies the Russians can destroy our calm but they cannot destroy our spirit,” he said. “Why do I go celebrate with friends? Because this year I understand that it is important to have people near.

Raids were also reported in the southern city of Mykolaiv where a local official said seven people were injured.

Governor Vitaliy Kim said on Telegram that Russia had targeted civilians with the raids, something Moscow has previously denied. “According to today’s tendencies, the occupiers are striking not just critical [infrastructure] … in many cities [they are targeting] simply residential areas, hotels, garages, roads,” he said.

The attacks came at an unusually quickened rhythm, one that alarmed officials just 36 hours after Russia launched a barrage of missiles on Thursday to damage energy infrastructure facilities.

Ukrainian Foreign Minister Dmytro Kuleba highlighted the harsh civilian toll of this latest offensive – that “this time, Russia’s mass missile attack is deliberately targeting residential areas, not even the energy infrastructure”. “War criminal Putin ‘celebrates’ New Year by killing people,” he added, calling for Russia to be deprived of its permanent seat on the United Nations Security Council.

Ukraine’s defense ministry meanwhile responded with a message of defiance.

“With each new missile attack on civilian infrastructure, more and more Ukrainians are convinced of the need to fight until the complete collapse of Putin’s regime,” it said on Telegram.

Curfews ranging from 7pm to midnight local time remained in place across Ukraine, making celebrations for the start of 2023 impossible in public spaces.

Cleaning With Bicarbonate of Soda – A Beginner’s Guide