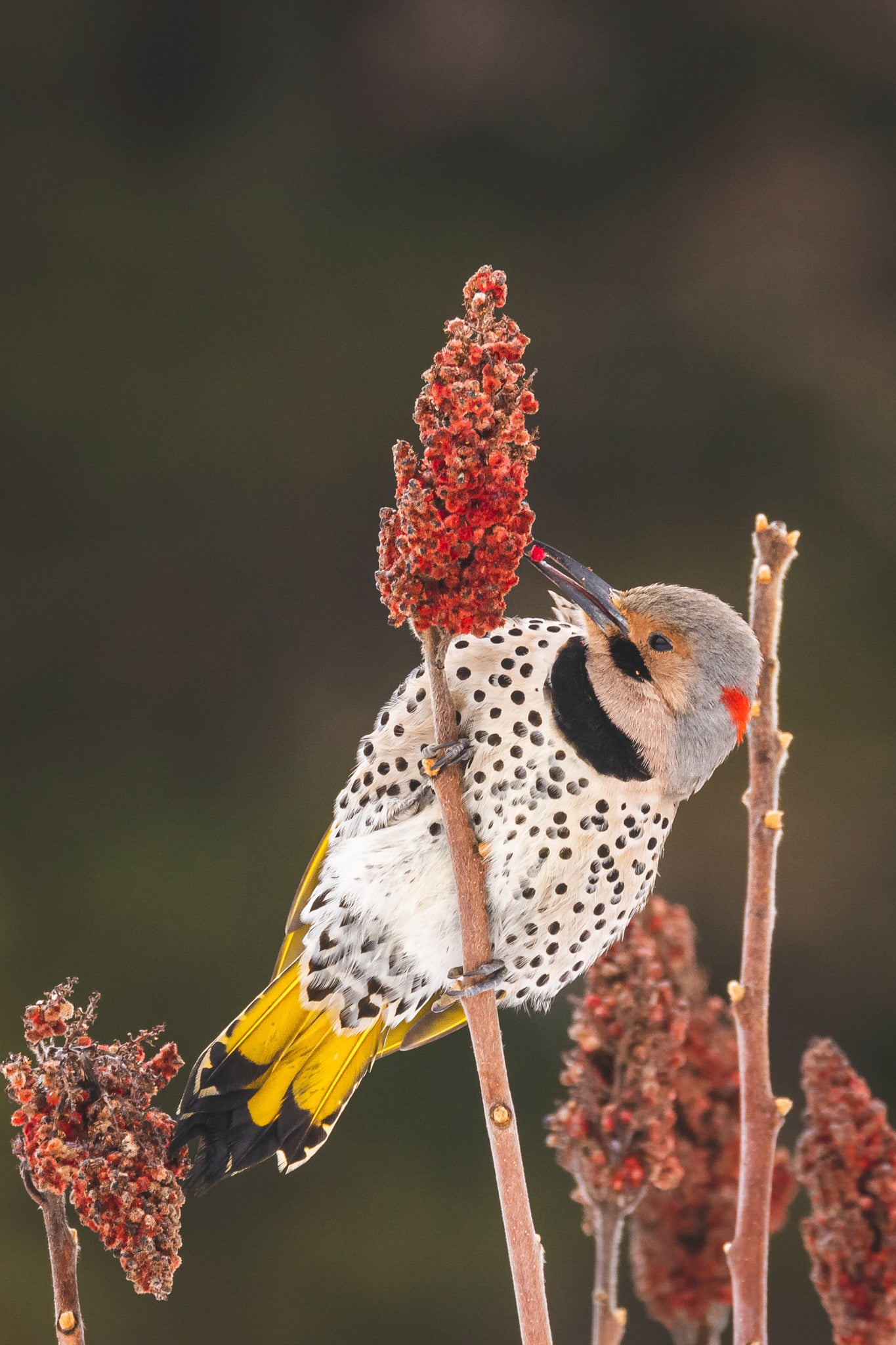 A Verdin’s nest tucked deep into a spiny cactus. An American Robin gulping down a berry. An ‘I’iwi probing for nectar. These stunning scenes depict common bird behaviors—breeding and foraging—often difficult to capture. But they also emphasize the important link between birds and plants native to their respective regions—a commendable endeavour.

Each year, the Plants for Birds category of the Audubon Photography Awards welcomes photos that place dual focus on the flora and fauna in each shot. Although the 12 images below were not 2022 winners or featured in our Top 100their perfect pairing of birds and the native plants they rely on still wowed us.

The diversity of species and plants highlighted in these stunning images reiterate a simple yet vital reminder: While birds rely on native plants for key resources, from nutrients to protective nest sites and perching spots, plants need birds for pollination and seed dispersal. This symbiotic relationship is why planting native species—from a simple patch around one’s lamppost or street tree to a lawn-turned-meadow of flowers—is so important. To get started, check out Audubon’s plant finder to discover plants native to your area. And if this gallery so inspires you, consider submitting photos to this category or any others for this year’s Audubon Photography Awards, which are currently open for entry,

American Robin on Washington Hawthorn (above)

Vibrant red berries frame this adult American Robin, an often-overlooked common bird. Commonly considered a harbingers of spring (though many live year-round within their local territories), robins famously eat a lot of earthworms but also rely on fruit still present on trees in fall and winter. Here, photographer Elizabeth Yicheng Shen snapped a shot of a bird poised to swallow a berry from a Washington hawthorn tree. A North American native, Washington hawthorns are commonly planted in parks and residential areas because of its white, showy flowers in spring and orange-red leaves in the fall. The small fruits persist through early winter, providing much-needed forage for birds, including American Robins and Cedar Waxwings.

Though the blue plumage of this Florida Scrub-Jay nearly matches the brilliant blue Florida sky, the bird’s feathers pop in contrast with the four brown acorns stashed neatly in a line in the jay’s bill. This endangered bird inhabits a narrow range in Florida, dependent on low-growing oak, like on which this jay perches. Although the Florida Scrub-Jay eats insects, berries, and even snails and small lizards, acorns are an integral part of their diet. Jays hoard nearly 8,000 acorns each year and, when hungry, hammer the cache open with their sharp bills. Capturing this gorgeous photo required dedication: Carrie DeLong battled copious mosquitoes while walking along the Scrub Ridge Trail with her family at Merritt Island National Wildlife Refuge.

Nestled in the prickly embrace of a cane cholla, a male House Finch delicately feeds his mate a tiny morsel of food at their nest. House finches once occupied only the western United States and Mexico, but now call the entire stretch of North America (including Hawai’i) home, an unfortunate consequence of their release by a pet shop owner in 1939. The species inhabits an impressive diversity of habitats, from coastal marshes to the dry desert of New Mexico, where photographer Linda Scher snapped this photo. Scher watched the male fly to the cholla, scan carefully, and then vanish into the cactus’s center—ultimately helping her locate the nest. The male’s coloration is a result of eating the cactus’s magenta flowers and yellow fruit. A diet rich in these colorful carotenoid pigments imparts a more vibrant red hue, as in this male House Finch.

Staring directly into the camera, this hungry, hungry American Robin swallows a bright red berry, exquisitely bordered by the bird’s yellow mouth. American Holly provides more than holiday decorations: They are also an important food source—and even nest site and shelter—for robins and other birds. A diecious species that bears thick, waxy leaves year-round, American holly needs male and female plants nearby for the female to produce its famous red fruit. Consider planting this shrub—or tree, as they can grow up to 60 feet tall—for a bird-friendly backyard oasis.

The bright vermillion feathers of the aptly named ‘I’iwi, or Scarlet Honeycreeper, shine against this photo’s mossy green backdrop. Endemic to the Hawaiian archipelago, ‘I’iwi live in mid-elevation forests on all the main islands except Lanai, where they are now extinct. This endangered bird—their numbers severely depleted by avian malaria—relies on nectar from lobed flowers, like the sunny yellow māmane flowers featured here. ‘Ōhi’a were a major food source for this Hawai’i native, but a fungal disease known as rapid death kills the tree within as little as a few days of infectionthreatening the survival of the tree and wildlife dependent on it.

Toes curled tightly around the rigid stem of a staghorn sumac, a Northern Flicker angles its body upward to pluck tiny red berries from the sumac’s desiccated flower head. Northern Flickers occupy forested regions across the United States year-round, consuming ants and beetles chiseled and plucked from the ground in the warmer months, and berries and seeds in the winter. A member of the cashew family, staghorn sumac grows commonly in open grasslands, prairies, and disturbed soils along roadsides. A single tree can produce thousands of flowers and, eventually, berries at the tips of branches, providing vital food for birds during the winter. Photographer Jennifer Miner’s profile shot also reveals important field marks: The bright yellow undersides of the tail and wing feathers identify this bird as a yellow-shafted Northern Flicker, found on the eastern coast (red plumage would indicate the western, red-shafted subspecies) . The black cheek stripe reveals the bird’s sex: male.

A Chipping Sparrow’s gray body, crisp face stripping, and red cap stand out against a tawny sea of ​​sugarcane plumegrass. Perched upon a single inflorescence bent from the bird’s weight, the sparrow proudly displays a bill stuffed with seeds. Also called sugarcane or giant plumegrass because it can grow up to 20 feet tall, the grass is native to a large area of ​​the eastern and southern United States and feeds skippers and common wood-nymph butterfly larvae, as well as songbirds. Photographer Cameron Kirkpatrick captured this lovely image in the Clay Family, a restored 40-acre preserve in Houston, Texas. The fauna attracted by the local park emphasizes how native plant gardens, no matter the size and location—even in the fourth largest city in the United States—offer food and refuge for birds and other wildlife.

The yellow legs of a Purple Gallinule stride effortlessly across giant, green pads of spatterdock, or yellow water lily, floating on the water surface. The bird’s blue frontal shield and red bill draw the eye to a dangling cupcake-shaped seed pod clipped from a lily stem. Gallinules inhabit freshwater wetlands and eat a variety of aquatic plants, including native spatterdock. The lilies provide food, cover, and easy movement—the large pads act as steppingstones to traverse water too deep for the birds’ legs. The more colorful version of the Common Gallinule, Purple Gallinules boast namesake purple, green, and blue feathers. These iridescent shades are the product of physical or structural coloration, awakening when sunlight hits the textured surface of their feathers at just the right angle.

Its long black legs clinging to the narrow spines of a cane cholla, the Verdin’s rich yellow head and chestnut shoulder patch pull the viewers’ attention from the cactus—and the more muted gray tail of a second Verdin. The pair’s nest, barely visible at the left edge of the frame, is tucked carefully inside the cactus’s sharp spines. Here, the camouflaged mate feeds youngsters insects and spiders gleaned from nearby desert plants. Cholla cacti offer Verdin—and other species like House Finch (above) and Curve-billed Thrasher—a protected nesting site and reprieve from the desert’s harsh sun. Cholla, along with other cacti species, are ideal for southwestern backyards as their spines minimize water loss.

An acrobatic American Goldfinch precariously grips the stem of a cup plant with both feet, the stem sagging under the bird’s mass. The vibrant yellow goldfinch pulls small green leaves off the flowerhead with its flesh-colored bill. Photographer Catherine Mullhaupt visits the Michigan State University pollinator garden regularly, observing the native fauna and waiting for the perfect shot. A common wildflower in the daisy family, cup plants earn their name from pairs of opposite leaves that join around the stem, collecting water when it rains. These cups of water attract small green frogs, while the flowers feed a bonanza of bees, butterflies, and birds.

A Red-breasted Nuthatch and the thin green needles of a western larch tree stand in sharp focus against a softly blurred background. The nuthatch emerges from beneath a tree limb, one foot gripping the sharp edge of bark peeling off the trunk. Captured while the bird is in its characteristic upside-down position, the bird’s tweezer-like bill holds a small bug immobilized. Red-breasted Nuthatches primarily eat insects, but during winter they consume conifer seeds from fir, pine, and larch trees. Western larch trees grow primarily in the Pacific Northwest, can live to 900 years old, and produce thousands of seeds each year—an important food source for nuthatches and other seed-eating species like chickadees.

Here, a Cactus Wren perches on the pad of a coastal prickly pear cactus, a downy feather fanning softly from its bill. The dead, brown blades of grass encircling the opening to the wren’s nest contrast sharply with the sage green pads and decaying yellow flowers from this opuntia—a genus of cactus with these distinctive oval pads or nopales. Coastal prickly pear grows primarily in Southern California, where it can form dense, sprawling patches. Birds feed from the prickly pear fruit, but Cactus Wrens mainly consume insects—just 20 percent of their diet is plant material—and instead use coastal prickly pear cactus and cholla cactus for nesting. Unique from other birds, Cactus Wrens construct multiple grassy nests and will use the extra sites for cushy roosting spots when not breeding.