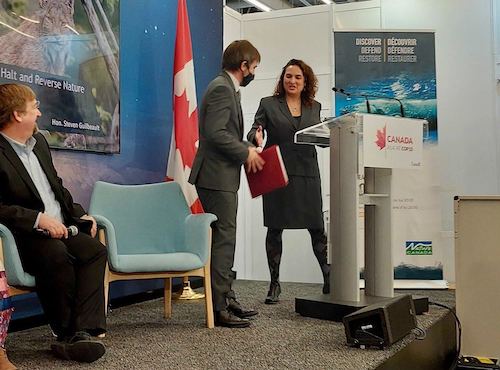 After months of preparations and two weeks of intense engagement in Montreal, nature lovers can celebrate some key wins at COP15.

Along with other members of the Nature Canada team, I was at the NatureCOP pushing for a strong global deal and new federal government commitments to protect nature here at home.

We went to Montreal buoyed by the thousands of Canadians who demanded action – and the federal government stepped up with important new action to halt and reverse nature loss in Canada, and to help deliver a new global deal to halt biodiversity loss around the world. So how did it shake out?

Here’s how COP15 landed in the five key areas of action that we felt would define success.

1. Agreement on a strong new Global Biodiversity Framework , You did it!

What we wanted: A new global deal to halt and reverse nature loss by 2030 with measurable targets, equitable financing through financial contributions to developing countries and a redirecting of harmful subsidies, and strong recognition of nature as a climate ally.

What we got: The Kunming-Montreal Global Biodiversity Framework – In the wee hours of Monday morning, a historic global agreement was reached to Halt and Reverse Nature loss by 2030 that commits to conserve 30% of land and ocean by 2030, and in that same timeframe to triple North to South financing for conservation to $30 billion a year, and reduce government subsidies that promote nature loss by $500 billion, starting with the most harmful. For its part, Canada announced over $600 million in new funding for biodiversity conservation in developing countries.

The agreement recognizes the negative impacts climate change is having on ecosystems, and the need for “nature-based solutions or ecosystem-based approaches” to minimize this harm. In general this new CBD framework is a significant improvement over its predecessor in terms of the measurability of targets, which is needed for accountability. At the same time, while many of the 23 targets have clear timeframes or markers for success, this is uneven across the document. Ambition was also rolled back in key areas like for pesticides due to corporate lobbying. And overall, the agreement lacks a mandatory ratcheting mechanism that increases requirements for government action over time if milestones are not met. As with most UN agreements then, accountability will come mainly through domestic pressure created within nation states to hold governments to account for their commitments under this deal.

What we wanted: Canada to work to ensure that Indigenous knowledge and rights were at the center of the new global deal, and to expand funding for Indigenous-led conservation and restoration.

What we got: A global deal that recognizes the fundamental role of Indigenous Peoples and, in Canada, $800 million in funding for new Indigenous protected areas in Ontario, Quebec, British Columbia and the North-West Territories, the launch of a National Guardians Network with $100 million in funding for Indigenous-led restoration, and significant new Indigenous-led conservation agreements in Manitoba and Yukon, First Nation, Inuit and Metis leaders were present throughout the COP, alongside strong representatives from Indigenous nations worldwide demanding respect for their authority, cultures and knowledge systems. The Indigenous Leadership initiative hosted an Indian village that showcased how First Nation conservation leadership carries the solutions the world craves.

3. Commitment to a national action plan to halt and reverse biodiversity loss in Canada – Yes!

What we wanted: Canada to signal its commitment to deliver a high-ambition national action plan to halt and reverse nature loss in a way that centers Indigenous rights, includes restoration of damaged ecosystems, ends harmful subsidies, and advances new laws and public engagement.

What we got: A commitment by Environment Minister Steven Guilbeault to deliver a whole of government action plan to halt and reverse the loss of nature in canada that includes continued action to protect a minimum of 30 percent of land and ocean by 2030, and the prioritization of Indigenous knowledge and conservation. He committed to action to end the subsidies that harm nature but without a timeframe. The new global deal requires countries to achieve reductions by 2030 but we need action sooner than this in Canada. Importantly the Minister announced his support for a new federal biodiversity accountability law, which we hope can be brought forward in 2023.

Canada also committed to restore 19 million hectares of forests by 2030 (an area almost the size of New Brunswick and Nova Scotia combined) and to phase out international fossil fuel subsidies, The latter is critical given the danger climate change poses to nature’s recovery, new commitments for moving on fossil fuel subsidy elimination at home must be next. Although calls From Nature Canada and our partners, the federal government did not commit to a timeline to deliver its action plan to halt and reverse nature loss. We will need to work together to keep the pressure on to ensure that this plan is delivered in 2023 and that it includes key commitments such as restoring 20 percent of all degraded ecosystems, halting the widespread degradation of forests from logging, ambitious targets for ending harmful pollution, and broadening equity of access to nature for all.

What we wanted: We wanted to make sure the ocean was in the room! We joined with other Canadian nature organizations in the SeaBlue coalition in a campaign calling for oceans to be central to the COP15 international agreement and for action by Canada to better protect ocean ecosystems at home, including by limiting bottom trawling and placing a moratorium on seabed mining .

What we got: The global ocean and coastal areas are implicated throughout the new agreement, and environmental organizations fought hard to ensure that the 30 percent protection by 2030 target included the ocean. Canada released a new policy for marine protection standards and also stepped forward with $230 million in new funding for ocean restoration and conservation in Canada, but did not announce a moratorium on deep sea mining or new limits for bottom trawling.

More leadership will be required in the coming year to ensure Canada’s ocean policies and programs align with the government’s biodiversity and climate agenda, including the commitment to support Indigenous governance and rights in marine areas. On Dec 18th at NatureCOP Canada signed a joint statement along with Norway Australia and over 30 other countries on the importance of protecting and conserving marine and coastal biodiversity. We will therefore be watching for Canadian leadership to help land a High Seas Treaty to protect biodiversity in the ocean as well as a global moratorium on deep sea mining. The IMPAC5 global ocean conference, to be held in Vancouver in February of 2023, is Canada’s next opportunity to showcase leadership, and we hope to see significant progress on protecting sites toward our 30% target.

What we wanted: We hoped Canadians would join us in this once in a decade opportunity to help build a strong and diverse public movement demanding ambitious government action to address the biodiversity crisis.

What we got: The hosting of COP15 in Canada has helped spawn a renewed and strengthened nature movement. Hundreds of Canadians participated in Nature Canada’s multi-province Nature bus tour, and thousands sent messages urging the government to act now to halt species extinction. With thousands joining forces to march the streets of Montreal during COP15, pressure is building on Canada and the world to bend the curve on species loss starting now.

Significant steps were taken at COP15 – both globally and in Canada – to protect nature and halt mass species extinction. But much work remains to implement the actions necessary to achieve the target of halting and reversing nature loss by 2030.

We look forward to working with you in 2023 to halt and reverse nature loss in Canada and around the world!

Thank you for all your support and wishing you all the best for a joyous and nature-filled holiday season!

Get a Birding Boost: Join the Great Backyard Bird Count