Violent Night: How Santa Got His Jingle Back – Christ and Pop Culture 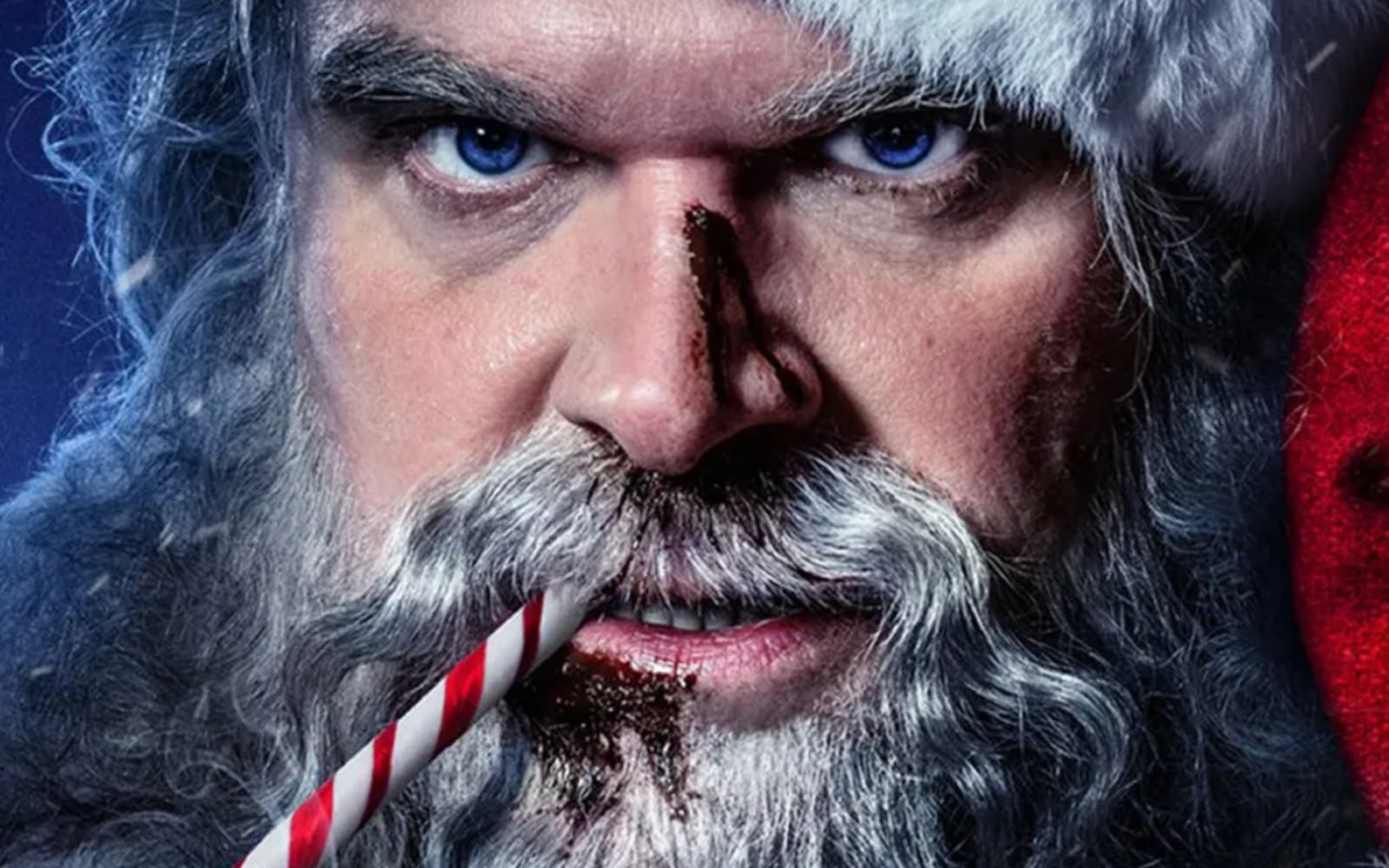 When mercenaries hold a wealthy family hostage, Santa must decide whether to walk away or to come to the rescue. This seems like a no-brainer in Kris Kringle lore, except in David Harbour’s Santa Violent Night has all but lost hope. Not to mention his policy on not getting involved in humanity’s problems. The aptly-titled film shows that, although couched in violence and gore, a non-traditional look at the holidays can provide an alternative gift-giving approach—along with a path to getting our holiday jingle back.

As Santa sits at the bar (yes, it’s that kind of Christmas movie) he slurs, “This whole world runs on greed.” But as he begins delivering presents and reading demanding lists, we see he’s not just jaded; he’s got a point. This isn’t Hallmark cinema, restoring faith in humanity: the holidays can’t pull society out of its self-absorbed narcissism.

If you’ve watched the trailer, you know the wealthy Lightstones are the most entitled, egotistical, and condescending bunch of jerks this side of the nuthouse. Except for little Trudy (played by Leah Brady), the youngest grandchild to the monstrous mogul matriarch (Beverly D’Angelo, unrecognizable from Christmas Vacation, Shortly after Trudy is tucked in on Christmas Eve, the mercenaries, led by John Leguizamo’s “Scrooge,” break in and make their demands.

Initially, Santa’s busyness and hands-off policy cause him to walk away. But he’s faced with the (Christmas) trolley problem—is saving Trudy worth risking bodily harm when everyone else in the house, both mercenaries and hostages, are on the naughty list? Mix in his hopelessness and it’s a pretty unappetizing slurp of involvement-eggnog for Santa to stomach.

The Gray Grace is Getting Fat

It bucks tradition to have Santa, the discerner of good and bad, become violent. It’s more than an attempt at a fresh take on the mythos of Santa Claus. It speaks to our current culture’s search for the distinction between right and wrong, but it also challenges traditional beliefs (like the assumption that violence is wrong). Violent Night provides an ethical standard through Santa’s scroll-like device that displays who’s on the naughty and nice list, and, more importantly, what they’ve done to earn their place in either category.

The film’s statement on society is accurate. Our culture says there is no such thing as absolute truth, therefore no one can agree on whether an action is right or wrong. And the prevailing American church culture is hypocritically pharisaical: we judge others for sins on a personal list while ignoring our own failings—not any better. When our culture postulates that ethical gray areas exist, we should agree, because holding to black-and-white interpretations excludes the possibility of grace.

A contributing factor to Santa’s non-involvement approach is that Christmas magic (much of which he doesn’t understand) is the record keeper. The list keeps track of who is on what list and the bag provides the requested present. And, although he has a unique and fascinating redemptive backstory, ultimately Santa goes against his peaceful demeanor and chooses to hurt those who are hurting others. But does he have justification?

The Best Gifts Are the Ones You Can Return

Trudy’s belief in Santa—along with a pep talk explaining that he doesn’t just give a present, he gives a solution to the beneficiary’s deeper need—pulls Santa out of his depression. It was Santa’s despondency that left him emotionally susceptible to perpetrating violence, but it was also his emotional state that made him vulnerable enough to receive Trudy’s wisdom. Santa was justified in protecting a child, and he showed grace in fighting for his unlovable family. His rationalization for fighting was a one-time occurrence (depending on opportunities for sequels!), but his commitment to address children’s needs is permanent. Santa realizes that the power of Christmas magic has given him a job to do, and he can make the world a better place, even if sometimes he experiences doubts and failures.

It’s a pretty easy comparison for us to recognize that even if we are depressed this season, despondent about the commercialism and greed surrounding the holidays, the Holy Spirit is a power greater than us, that even with our failings we can make the world a better places. But the application may not be black-and-white—more of a graceful grey.

The true story of Santa Claus holds the answer. as my fat man articles details, Saint Nicholas gave gifts to the poor because he believed God had made him prosperous in order to bless others. Jesus told us to love others as much as we love ourselves (Matthew 22:35-40) and that people would know we were His followers by the way we love others (John 13:34-35, So it’s no surprise that the monumental event of His birth, the touchpoint of recorded time on Gregorian calendars, would be an example of His love for others.

To properly commemorate Jesus’ humble sacrifice of coming to earth, we must share His spiritual-natural love with others. We may not get a chance to heroically save a little girl like David Harbour’s Santa did, but there are a few things within our reach. We can combat our hoarding instincts by donating some of our current possessions to make room for the flood of new junk waiting under the tree. And we can sacrifice our time at a homeless shelter or give some cash to organizations like Operation Christmas Child, Prison Fellowshipor Toys for Tots that disseminate presents to less fortunate kids.

But what about the personal gifts we give? Society has primed us to feel guilty if we don’t pay for the highest quantity and quality of presents for our loved ones (and then ignore the guilt of going into debt). So, if you have requested your family not to buy into the consumerism of the holidays and they continue to give you gifts, thereby forcing you to reciprocate, don’t get depressed. Consider giving presents that don’t buy into the consumerism of the holidays.

Try hand-making gifts. It will be a sacrifice of time and not every recipient may be ecstatic (my thirteen-year-old daughter wouldn’t love a cardboard box marked up to look like an iPad), but you will have shown unusual intentionality and care, thereby addressing a deeper need. After all, that’s how Santa got his jingle back.