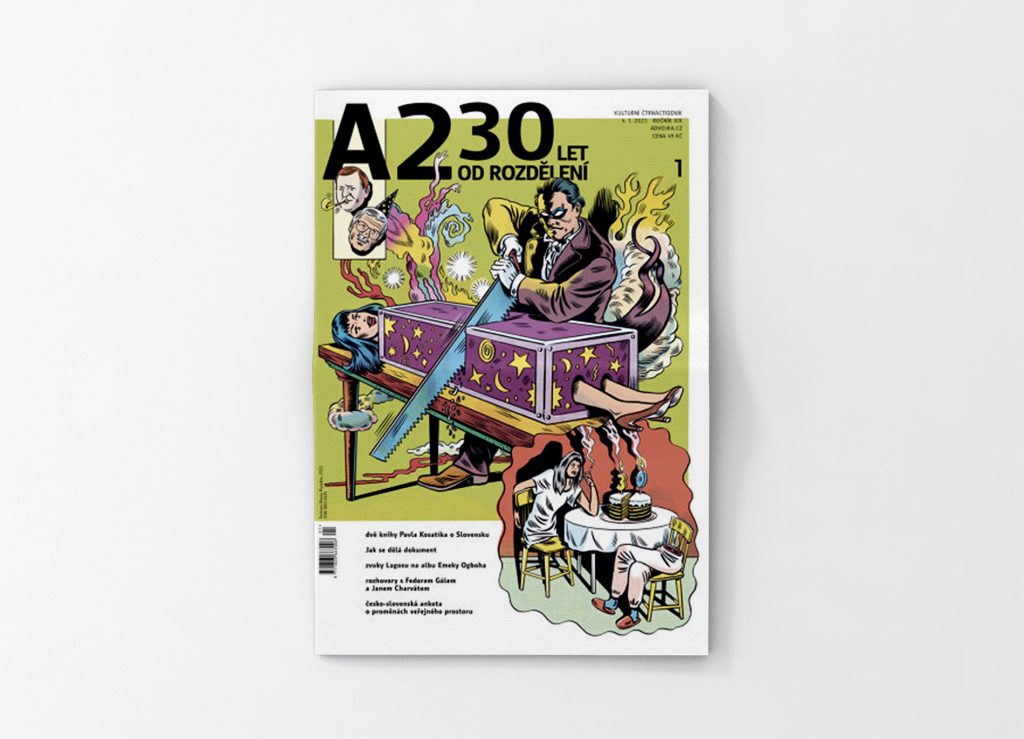 The Czech journal A2 is dedicated to the thirtieth anniversary of the breakup of Czechoslovakia (31 December 1992) and is published jointly with its Slovak counterpart. Kapital, While A2 focuses on the shared past and the growing differences between the two countries, as reflected in historical writing, fiction, the visual arts and documentary film, Kapital takes a speculative approach, gauging the future of cultural policy, theatre, music, folklore and architecture.

A2 Editor Matěj Matelec sees the history of Czechoslovakia as the ‘unsuccessful attempt at a common state of Czechs and Slovaks’. A key foundational myth of the newly-created state in 1918 was the fictitious concept of a single nation, invented to ensure that the majority would have a larger presence than the sum-total of national minorities: ‘Just as the Czechs needed the Slovaks because of the Germans, so the Slovaks needed the Czechs because of the Hungarians.’

But inequality was baked into the project from the start, with Czechs looking down on Slovaks and often seeing the eastern part of the country as little more than an open-air museum of folk art. Despite the rhetoric, Slovaks’ aspirations to real equality had been thwarted for decades, fueling resentment and nationalism. Because the Czechs and the Slovaks did not share the same idea of ​​what a common state should be, the breakup of Czechoslovakia was inevitable.

Nevertheless, Matelec believes that ‘the Velvet Divorce represents a failure of our young democracy – a betrayal of the electorate’ that heralded future decisions taken by elected representatives above the voters’ heads. Matelec concludes his scathing assessment of the Czech elites as follows: ‘We have blamed someone else for most of the major historical upheavals in our modern history – the birth of Czechoslovakia, the Munich Agreement, the liberation and occupation. The only thing we did by ourselves was to smash up our common state.

The first time as tragedy…

‘The breakup was a total failure,’ argues sociologist and former politician Fedor Gál in a long interview with Matěj Matelec and Lukáš Rychetský. Born in 1945 to Slovak Jewish parents in the Theresienstadt ghetto, Gál was a leading figure in the ‘Tender Revolution’, as the Velvet Revolution is known in Slovakia. He was also a founding member of Public Against Violence, the party that spearheaded Slovakia’s transition to democracy. In 1992 Gál moved to Prague, disillusioned with politics and rising antisemitism. ‘I often wonder what we did wrong for things to end up like this, for Czechoslovakia to be broken up by people foaming at the mouth and spewing out negative emotions, people whose visions were reminiscent of what we saw in Slovakia in the 1930s.’

Gál is equally scathing about present-day Slovak politicians who pretend to be pragmatic while behaving ‘like black marketeers and peddlers of shoddy goods’. Nevertheless, when asked if Czechoslovakia would still exist if it hadn’t been for the Czech prime minister Václav Klaus and his Slovak counterpart Vladimír Mečiar, Gál replies: ‘Every historical situation chooses its own cast. If it hadn’t been Mečiar and Klaus, it would have been some clones of theirs a year or two later.’

In capital, Czech sociologist Dominik Zelinsky takes a critical view of a new book by Martin M. Simečka, a former dissident, writer and journalist with a mixed Czech and Slovak background. Šimečka’s widely praised account of his long walks across the Slovak countryside, Arrival of a tourist in Slovakia (‘The adventures of a wanderer around Slovakia’), was hailed by its publisher Matúš Kostolný as ‘a new way of thinking about the key themes of our times’. But while Šimečka sees a higher degree of development on the Czech side of the border, he fails to explain why the difference ‘is not just ‘dramatic’ (whether in economic, political or other terms) but ‘civilisational’.

Šimečka asserts that Slovakia lags behind its Czech neighbor because the country hasn’t yet fully reckoned with its past. ‘Critical reflection on the past is undoubtedly important,’ Želinský contends, ‘however, one might ask if the lack of retrospective analysis is really what engenders a sense of hopelessness in Slovakia … Shouldn’t Slovakia’s priority, besides reflecting on its past, be its present and future?’ After all, there are plenty of shameful moments in the Czech past that have not been properly reflected: Želinský cites, among other things, the concentration camp for Roma people in Lety that was not turned into a memorial until 2022, after decades of being used as a pig farm.

Rather than offering any new insights into the state of the nation, writes Želinský, Šimečka’s book provides only well-worn clichés about ‘oligarchs, angry people, nostalgia for socialism, and endless lamentations about things being better in the Czech Republic’.