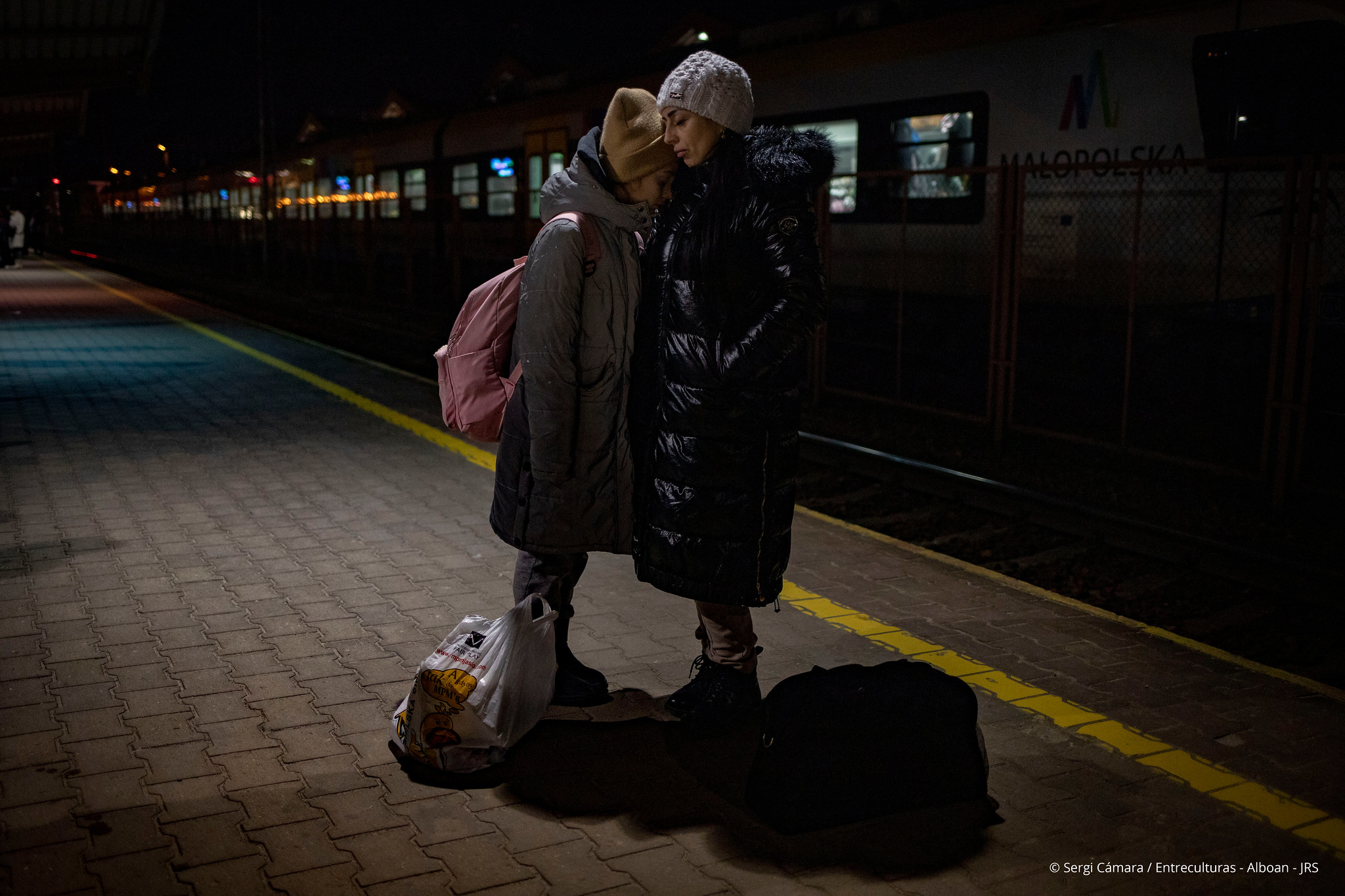 The use of digital technologies in Ukraine, documenting both crimes and war relief, has significantly changed civilian and humanitarian engagement since Russia’s invasion escalated. Due to global digital connectivity, there are seemingly infinite ways of responding and intervening in this war, for better or for worse.

Several images that soon went viral were of a pregnant woman evacuated from the bombed maternity hospital in Mariupol. As opposed to the ‘refugee crisis’ of 2015, last spring witnessed – to paraphrase Nobel prize winner Svetlana Alexievich’s seminal work – a ‘motherly face of war’. The iconic images spread around the world in just a few hours, encouraging civilian populations to engage and intervene on a massive scale, but both mother and child died in labour.

The trauma experienced by forcefully displaced women is first and foremost gender specific. Violence against women in war is most visible as rape, trafficking and other sexual exploitation: almost one in ten women are or become pregnant during their journey.

Yet women do not need to be raped or enslaved to be severely traumatized because of their gender in times of war. Insufficiently addressed reproductive health needs in peace time become even more problematic: lack of contraceptives, sexually transmitted diseases, unwanted pregnancies, delivery complications, undernourished/premature children, just to name a few issues.

Mothers face additional challenges in providing healthy/safe conditions for new-born babies and accompanied children (food, shelter, education) that can loop back to exchanging sex as a means to provide for their children. As many mothers become preoccupied with the survival of their children, dealing with post-traumatic stress disorder and feelings of depression, isolation and despair are usually postponed to after the war or not addressed at all. This puts mothers and their children at risk of lasting psychological disturbance and intergenerationally transmitted trauma.

Despite the existence of altruistic action, misery, it appears, can always be turned into an innovation opportunity that leads to big business for some: in the context of mass migration to Europe in 2015-2016, more than 1,000 refugee-related apps were launched over the course of two years in Germany alone (eg, Refugermany and New Roots App). Researchers have provided rich evidence for how mobile Internet devices and apps/platforms play an essential supporting role in planning, navigating and documenting journeys and maintaining regular contact – albeit with smugglers in addition to family, friends and others who help refugees. Mass communication channels have been used to spread information of available shelters and aid: large companies such as Uber and Airbnb, for example, have used their platforms to facilitate services for refugees – often targeting women.

Any humanitarian worker on the ground knows that no relief center can compete with a mobile device for helping distribute aid today. Digital solutions respond to demands for services that are portable and no longer attached to a physical space and community. In assuming some type of universalism/globalism, they have the power to reach anyone, anywhere. An app developed for ‘refugees’, for instance, addresses an extremely diverse group of people; for many ‘being a refugee’ might be the only identity label that they have in common.

Offering such a diverse group information about shelter and food is perhaps something that could be packed into one ‘universal’ app, but what about services related to culturally constructed and regulated domains such as reproductive and sexual health?

Myriad platforms, online services and digital support – from augmented reality family planning instruction and chatbots on STD prevention to sophisticated AI-run digital companions that walk you through the steps of a safe abortion – may be available on a local level. However, creating universal content on culturally sensitive sexual and reproductive health topics for women forced out of their home context seems too ambitious, even dangerous.

Many female refugees were raised in societies with gender and sexuality norms that are different from the sexual/reproductive rights in western countries. Accepting services that ignore cultural differences might result in serious social repercussions.

Conversely, refugees can be subjected to local legislation in the place where they seek safety that undermines their previously existing freedoms, violating their human rights. When Ukrainian women raped by Russian soldiers seek an abortion in Poland, for instance, they find themselves stripped of the reproductive rights that they can claim in their own country. Many have been forced into performing pharmacological abortions in the secrecy of homes with drugs that were sent from abroad through international networks communicating via Whatsapp, Signal or Facebook groups.

People who find themselves in an occupied territory overnight need immediate help. When hungry, in danger, afraid or deeply traumatized, one makes use of whatever support comes first.

Just after the war escalated in Ukraine, some women in search of shelter were subjected to trafficking through unverified and/or unregulated platforms. Panic, shock and trauma will make some of us incapable of using already acquired digital skills and applying safety and security measures, accepting some ‘help’ that would otherwise raise alarm bells. While digitalization improves the lives of many, online tools and platforms might be a bigger threat than not having support at all for some women in emergency situations.

Digital literacy is a crucial skill. Knowing how to use devices is important but so too is finding and filtering reliable information, recognizing digital risks and rights, and especially understanding what it means to have and be a digital body – a body that is legible as data, sometimes with physical consequences.

In refugee settlements, most women seeking support primarily turn to simple communication tools like Messenger, WhatsApp and Telegram. Sophisticated apps and interactive platforms with culturally related content are exciting tools when individuals are able and willing to access them. Among women in general, but refugees in particular, just owning a mobile device or having autonomous access, however, remains one of the biggest challenges.

Globally, more and more individuals possess a form of mobile device, yet women are more likely to own so-called ‘dumb phones’, meaning they can only use simple communication and texting services.

Additionally, many women in forced migration share devices with other family members, who are often male and act as gatekeepers to information and services accessed through the device. Using someone else’s phone leads to self-censorship when searching for information; never being fully sure how data is traced and recorded leads to a fear of personal information being discovered.

This disadvantage is linked to generally lower digital literacy among women globally, While safety and security online are fears in their own right, particularly when it comes to populations that are continually chased or under threat of deportation.

Those refugee women who have their own phones and know how to use them safely are often still faced with poor infrastructure, including reliable Internet access, charging stations and sim cards, in legal or illegal settlements.

Despite such barriers, the accessibility and use of digital technologies is on the rise and might ultimately be of greater positive social impact for refugees. Digital developments could further enhance educational opportunities and patterns of social interaction, allowing resettled people to stay in touch with social networks left behind and build new connections.

But do we need something more complex, sophisticated and ‘innovative’ when life lacks even the basics and has been stripped of all dignity? Or are technological inventions for the most part a developed world’s exercise in technological, symbolic and even neo-colonial powers? The amount of funding spent on innovation and digital solutions as opposed to facilitating those services and products on the ground is disproportionate.

Digital technologies contribute a large part to executing humanitarian action, but what remains most important is the ability to connect and communicate (ie, having a simple tool for texting and speaking). Not only might other tools demand more powerful devices and a stronger connection, but they might also call for a skilled user: knowing how to use digital tools and increasingly how to use them safely,

Women’s war traumas in Ukraine have attracted many investors and developers to contribute towards universal reproductive health and rights tools, but projects have generally approached humanitarian interventions through ‘Silicon Valley solutionism’: only recognizing problems that are solvable with a clear and linear technological product. While innovation is necessarily linked to risk taking and experimenting, this is problematic when applied to traumatized and vulnerable individuals such as refugee women. New technologies, often developed in safe ‘laboratory’ spaces, ignore persistent social taboos, stigmas and existing cultural barriers. The gap between enthusiasm for innovation and an understanding of actual humanitarian problems contributes to producing digital litter.

Stigma of the Third-World woman

International charities and global humanitarian organizations have always emphasized the cultural sensitivity and importance of refugee women’s cultural and religious backgrounds when debating digital support for those arriving in western countries. With specific emphasis on reproductive rights as part of a ‘universal’ western human rights concept, many new trends in digital support aim to ’empower’ refugee women to have greater control over their lives and the services provided for them. Before the war in Ukraine, this approach was disputed for producing what Chandra Mohanty called a ‘Third-World woman’: an essentialistic portrayal of women from the developing world (ie, ignorant, poor, uneducated, tradition bound, domestic, family-oriented and victimized).

Female Ukrainian refugees, though perceived as European from the outset and saved from being immediately labeled as ‘other’, have been denied basic reproductive rights when entering the EU. Online tools, connectivity, infrastructure, universal humanitarian aid were all available, but the reality on the ground did not match up to this digital evolution.

Alongside a desire for technological developments, we remain socially fixated on preserving traditional norms, behaviours, beliefs and values ​​– many of them regressive if not harmful. Connectivity gives us a false impression of universalism, but once a physical border has been crossed, a new cultural order determines one’s actions. The forced migration of women and its accompanying gender-specific trauma highlight that the real digital transformation is no longer in simply acquiring better infrastructure and gadgets but in changing social systems and human interactions. Rather than the current trend for overcoming cultural barriers or promoting social change by investing in a new device, platform, software or app development, some real human work on the ground has to be done as soon as possible before new technologies widen already existing gaps.

This article was written in connection with a project funding by the Austrian Federal Ministry for Climate Action, Environment, Energy, Mobility, Innovation and Technology as part of Digital Humanism Initiative, IWM, Viennaand by the European Union’s Horizon 2020 science and innovation program under the Marie Skłodowska-Curie grant agreement No 945380 (EUTOPIA COFUND Science and Innovation Fellowship)hosted by GRITIM-UPF Barcelona (Interdisciplinary Research Group on Immigration) and CYU Paris (IDNH – Institut des Humanités Numériques),