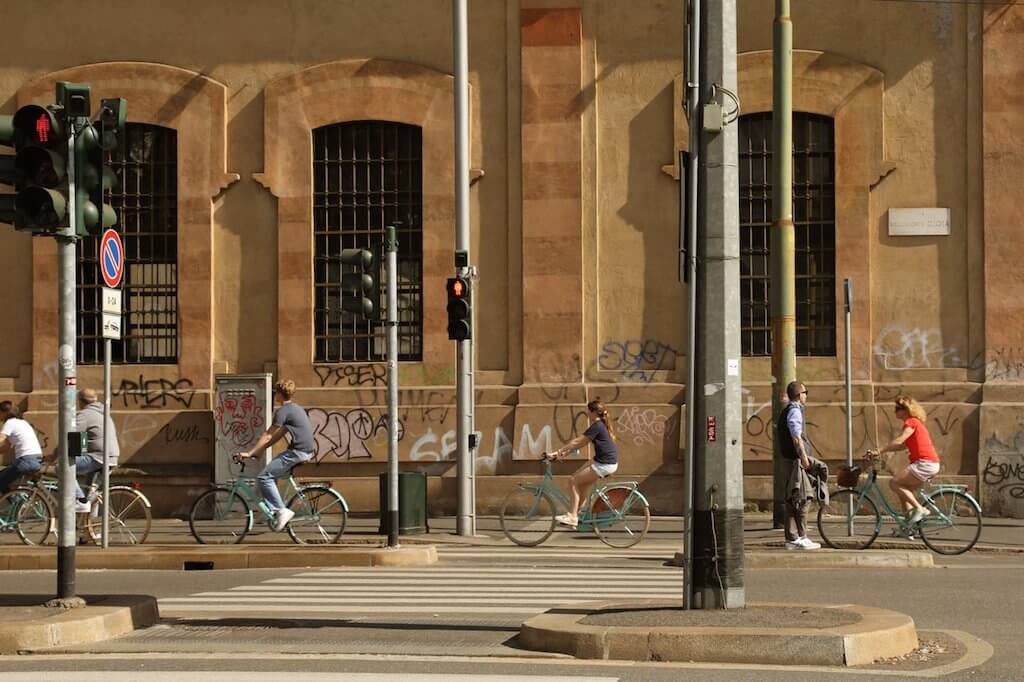 Last spring, the Council Commission of the City of Milan was held on the topic of Cambio, the metropolitan bike plan project for the Milan area. Milan municipality’s councilor for mobility, Arianna Censi, presented the plan and said, “Cambio represents a huge opportunity for active travel for metropolitan citizens; it is a European-style project, with useful infrastructure dimensions that ensure the competitiveness of the bicycle even on medium to long distances.”

The philosophy behind Cambio remains that of encouraging safe and proper bicycle use, especially ensuring the connection from one municipality to another. This is why the project is the result of strong collaboration with municipalities, and this need for inter-municipal connection emerged precisely from the involvement of municipalities in the metropolitan area.

The project, as already announced, includes 750 km of bicycle paths, with a projected budget of 400 million euros. This is certainly a full-bodied plan that will keep the metropolitan city busy until at least 2035. Cambio’s goal remains to reach 20 percent of total trips by bicycle, so widespread bike lanes will tangentially touch all metropolitan city municipalities.

Everything written in the document is very promising. However, I have difficulty reconciling this document with what I see with my eyes and what I hear with my ears.

Just a couple of weeks ago I read in the Corriere della Sera newspaper that 325,000 speeding fines were issued in Milan in 2021. Fines that were, however, not enough to prevent 6,000 accidents with injuries and 32 deaths. Why is it that in a city with such big ambitions, people on the streets are still so vulnerable?

For many, these are only numbers. For me they have a name and a life, just like Beatrice Macrì, who a year ago in Milan (on July 17, 2021) was hit while she was cycling on the Ghisolfa overbridge: she remained in hospital for two weeks, then began rehabilitation and slow recovery. And today Beatrice is advocating to have a cycle path built on that very dangerous road (used by 1500+ cyclists daily). The citizens living in this neighborhood have been organizing demonstrations, collecting signatures for many years, but the municipality was silent as a grave, until a very particular event.

One morning at the end of July, citizens found a bike lane reserved for them on this dangerous road. The bike lane was not created by the municipality but by the activists.

The councilor for mobility of the Municipality of Milan, Arianna Censi, decided to break her silence and say a few words through a post published on Facebook and Instagram. Censi accused the activists of having defaced and soiled public land and of having jeopardized the lives of those who pass through it and then defined the gesture as “stupid.”

One would think that perhaps rather than accusing the citizens who are calling for interventions for their safety in every possible way, the municipality should be ashamed of not finding a solution that would be considered even trivial in the rest of Europe.

If Milan’s goal with the Cambio plan is to reach 20 percent of total trips by bicycle, there are some decisions and actions that do not seem sincere and convincing to me.

For instance, the City of Milan decided to host a Motor Show in the city center, offering the most visible and valuable public squares for automobiles. As if that was not enough, to this was added the discount made by the Municipality of Milan on the rent for the occupation of public space for a value of 412,000 euros. And finally, the cycle path in the city center was occupied or blocked by SUVs.

On the other hand, the Milano Bike Week, a collection of bicycle-related events, which has been held in the city for two years, is canceled due to a lack of financial resources. The cost of the program to the municipality is around 25.000 euros…

Not only Milan Bike Week but there are other events such as the global women’s event, Fancy Women Bike Ride (which I helped start in 2013) not hosted in Milan any longer as the city forces the organizers to do the bike ride accompanied by the police. The police ask for a reimbursement of the extra hours, which is too much to cover for event organizers. The same happened for a spring bike ride organized by a local cycling association. The association cannot afford to pay the police officers’ fees and the municipality does nothing to hold these events. This is a pity, as this kind of bike ride in the city is a nice way to get more people on bikes and change their approach to urban mobility.

Last but not least, in 2022 Italy’s first cycle tourism expo was held in Milan to huge success in participation (15,000 visitors in two days) with an aim of convincing more people to consider cycling holidays. The city of Milan was not able to find a location for the second edition of this expo so the event, Fiera del Cicloturismo, will be held in Bologna next year.

I think the politicians are not convinced that future mobility in urban spaces is active mobility, and that behavioral change can be achieved with a positive experience.

If people in Milan do not feel safe on the road, they will not pursue walking/cycling. If the mayor allows an SUV to be parked for a week in front of our cathedral ( Duomo is one of the most Instagrammed squares in Europe) and makes a discount to the Motor Show organizers but does not help local active-mobility initiatives to survive, I don’t think we will have a change (Cambio) in this city.

Pinar Pinzuti is a long-time cycling activist. She is the chief “cycling brainwasher” at Bikenomistdirector of the Fiera del Cicloturismo – Cycle Tourism Expo&Talks, ambassador of the Women in Cycling Initiative and the coordinator of the international grassroots movement Fancy Women Bike Ride,

To support Momentum visit us on Patreon,