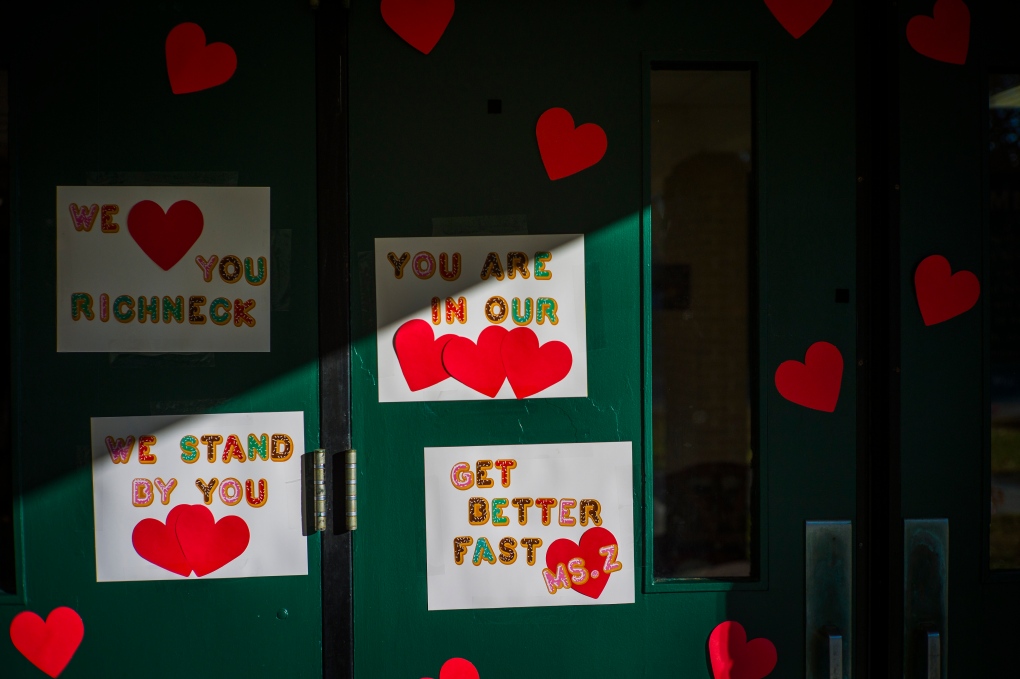 In the moments before a 6-year-old Virginia boy shot his teacher, there was no fight, no physical struggle and no warning, authorities said Monday.

“What we know today is that she was providing instruction. She displayed a firearm, she pointed it and she fired one round,” Newport News Police Chief Steve Drew said.

Drew, who spoke during a news conference, offered the first detailed description of a shooting that shocked the city and was notable even in a country like the United States that seems inured to constant gun violence. Drew had previously said that the shooting was not accidental and had declined to elaborate.

Drew said he wanted to clarify remarks he made just after the shooting on Friday, when he said there was an “altercation” before the shooting. He said it was more like an “interaction” between the boy and his first-grade teacher at Richneck Elementary School, 25-year-old Abby Zwerner.

But Drew also reiterated that the shooting was “not accidental.”

“It was intentional,” he said.

Drew also revealed that the 9mm handgun used by the boy was legally purchased by his mother and was in the family’s home. He said the boy brought it to school in his backpack the day of the shooting.

Zwerner put up her hand in a defensive position when the gun fired, and the bullet went through her hand and into her upper chest, Drew said. Although her injuries were initially considered life-threatening, she has improved and is currently listed in stable condition at a hospital.

Drew hailed Zwerner as a hero for quickly hustling her students out of the classroom after she was shot. He said surveillance video shows she was the last person to leave her classroom.

“She made a right turn and started down the hallway, and then she stopped. … She turned around and made sure every one of those students was safe,” Drew said.

Drew said a school employee rushed into the classroom and physically restrained the boy after hearing the gunshot. He said the boy became “a little combative” and struck the employee. Police officers arrived and escorted him out of the building and into a police car.

The boy has been held at a medical facility since an emergency custody order and temporary detention order were issued Friday, Drew said. He said it will be up to a judge to determine what the next steps are for the boy. He also said the boy’s mother has been interviewed by police, but it is unclear whether she could potentially face any charges.

As questions loomed about the boy and his mother, Zwerner’s friend told a crowd gathered at a Monday night vigil that the first-grade teacher has shown “dedication and love for what she does day in and day out.”

“Abby is a warrior and she demonstrates mental and physical strength every day,” said Rosalie List, a 2nd grade teacher at Richneck. “I’m so proud of her.”

Lauren Palladini, Richneck’s school counselor, told the crowd that Zwerner is “sweet. She’s thoughtful. She’s caring. And she’s been one of the most amazing teachers that I’ve been blessed to interact with.”

Amanda Bartley, who teaches at another elementary school in the city, asked everyone to pray for Zwerner and to “pray for the young man who did this.”

As she passed out candles before the vigil, Bartley told The Associated Press that she organized the event to support Zwerner and to uplift others. But, she said, many questions remain unanswered.

Among them: “How did he get the gun? Why wasn’t it locked up? A good gun owner knows that you lock up your weapon. You have a safety on. You keep the ammunition separate from the weapon itself.”

Gun owners can be prosecuted under a Virginia law that prohibits anyone from recklessly leaving a loaded, unsecured gun in a manner that endangers the life or limb of children under 14. A violation of that law is a misdemeanor, punishable by a maximum jail sentence of one year and a maximum fine of US$2,500.

“Virginia definitely has a weaker law than many other states that have child access prevention laws,” said Allison Anderman, senior counsel and director of local policy at Giffords Law Center to Prevent Gun Violence.

Legal experts said even though it is theoretically possible under Virginia law to criminally charge a 6-year-old child, there are numerous obstacles to doing so and it’s highly unlikely that any prosecutor would even try.

To be tried as an adult in Virginia, a juvenile must be at least 14. A 6-year-old is also too young to be committed to the custody of the Department of Juvenile Justice if found guilty. In addition, a common law doctrine known as the “infancy defense” holds that children under 7 cannot be prosecuted for a crime because they are so young that they are incapable of forming criminal intent.

A judge would also have to find that the child was competent to stand trial, meaning that he could understand the legal proceedings against him and assist in his own defense, said Andrew Block, a professor and the University of Virginia School of Law who was the director of Virginia’s Department of Juvenile Justice from 2014 to 2019.

Julie E. McConnell, a law professor at the University of Richmond who has worked on youth justice cases for more than 25 years, said prosecutors can file what’s known as a “Child in Need of Services” petition in cases in which a child’s behavior or The condition presents or results in a serious threat to the child’s well-being and physical safety.

A judge would then have an array of options, including: ordering services such as counseling or anger management; allowing the child to remain with his parents, subject to conditions; ordering the parents to participate in programs or cooperate in treatment; or transferring custody of the child to a relative, child welfare agency or a local social services agency.