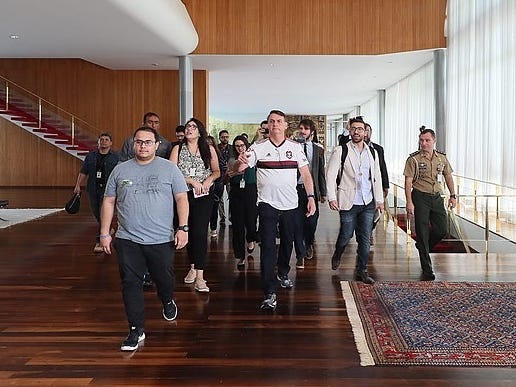 Brazil’s former President, Jair Bolsonaro, is said to have trashed the official residence, the Palácio da Alvorada, in the capital Brasília, a report suggests.

The new President, Luiz Inácio Lula da Silva, known as Lula, was sworn into office on New Year’s Day. However, his official residency has been left in a dilapidated state by Bolsonaro and his family, who had lived at the Palácio da Alvorada (Palace of Dawn) for four years.

The shabby state of the building was revealed in a tour of the palace with Brazil’s first ladyRosângela Lula da Silva, who accompanied GloboNews political correspondent Natuza Nery.

In her report, Nery said, “the overall state of the building, which is Brasília’s most iconic, is not good and will require many repairs,” per The Guardian.

Oscar Niemeyer, a key figure in the development of Modernist architecture, designed the building. Built between 1957-58, it is considered a masterpiece of modernism and is listed as a National Historic Heritage Site of Brazil.

The first lady said she is “rather disappointed” and “shaken” at the state of her famed new home, The Guardian reported.

The report states that there were leaks, damaged furniture, and fittings, and works of art from the official collection had disappeared.

Precious items at the residence that were damaged included a tapestry by Emiliano Di Cavalcanti, one of Brazil’s most celebrated 20th-century artists, which had been damaged by the sun after being improperly kept.

“Unfortunately, it will have to be restored,” the first lady said, per The Guardian.

According to the GloboNews interview, Bolsonaro also left a ballpoint pen — a symbol of his presidency — on a desk and removed a cactus planted by Lula in his 2003–10 presidency.

According to a New York Times report, Bolsonaro flew to the US and planned to stay for at least a month while he faced investigations from his term as president relating to misinformation.