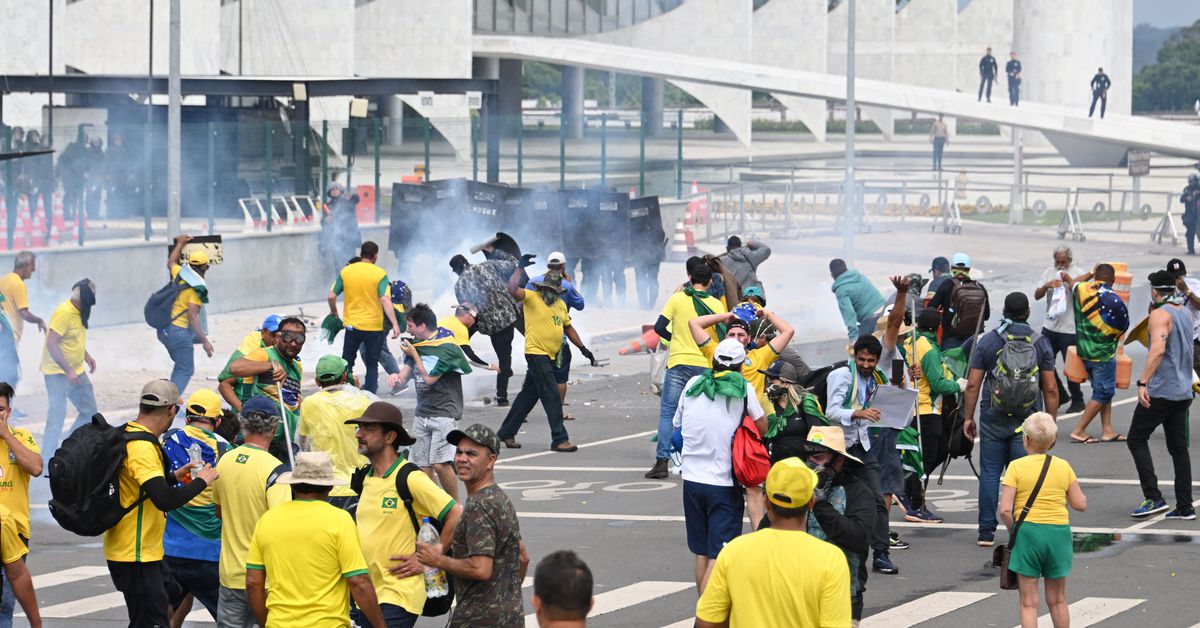 Thousands of people loyal to the right-wing Bolsonaro broke through police barricades and entered the Congress and Supreme Court buildings, Bolsonaro’s supporters — called Bolsonaristas — also surrounded the presidential palace, calling for Lula’s resignation, though the president was on an official state trip to Araquara and not in the capital, Brasília. Congress was also on recess, leaving the building mostly empty.

lola made an official statement at 4:00 p.m. ET, saying he would sign an emergency decree, in effect till January 31, allowing the federal government to implementany measure necessaryto calm the unrest in the capital.

“They took advantage of the silence on Sunday, when we are still setting up the government, to do what they did.” Lula’s account tweeted Sunday., “And you know that there are several speeches by the former president encouraging this. And this is also his responsibility and the parties that supported him.”

Videos of Bolsonaristas draped in yellow flags and sitting at the desks of lawmakers appeared on Twitter Sunday afternoon in a scene reminiscent of the January 6, 2021 storming of the US Capitol building by right-wing supporters of former US President Donald Trump. Through the afternoon, the protestors broken windows in the Supreme Court building, flew the Brazilian imperial flag above the congress buildingset fire to a carpet in the lower house of Congress, looted gifts from foreign dignitariesand reportedly attacked a photojournalist from the news outlet metropoles,

Police forces at the capitol initially used tear gas against the protesters; however, that failed to deter the protesters and drove the guards to seek cover behind the building. The Brazilian Armed Forces and anti-riot police, as well as the entire police force of the state of Brasiliahave been called up in an attempt to quell the protests, but as of this writing, the Bolsonaristas remain in the federal buildings.

Similar to rioters who stormed the US Capitol building almost exactly two years ago, the Bolsonaristas are animated by the belief that Brazil’s 2022 elections were rigged, and that Bolsonaro is the true winner of the election. Bolsonaro has been in the United States since Lula’s January 1, 2023 inauguration and has not yet publicly commented on the situation.

Lula won a runoff election between himself and Bolsonaro in October of last year, marking a return to power after a stint in prison on corruption charges. Lula, a left-wing former president who helped raise the standard of living for millions of Brazilians by strengthening the country’s social programs, first served as Brazil’s president from 2003 to 2010. He was in prison from 2018 to 2021.

Bolsonaro repeatedly intimated that the election was rigged or unfair, and instructed his followers to “go to warIf Lula “stole” the election. Even before Lula’s victory in the second round of elections, Bolsonaro’s supporters were protesting, camping out near military bases and pleading with the armed forces to step in and keep Bolsonaro in power by preventing Lula’s inauguration. Other protests involved blockades of roads and highways, including blockades by semi truck driversafter Bolsonaro posted a video of himself driving a tractor, a semi and a bus, which was interpreted by some of his supporters as encouragement.

“Whoever did this will be found and punished,” Lula wrote on Twitter. “Democracy guarantees the right to free expression, but it also requires people to respect institutions. There is no precedent in the history of the country what they did today. For that they must be punished.