What comes after Brazil’s January 8? 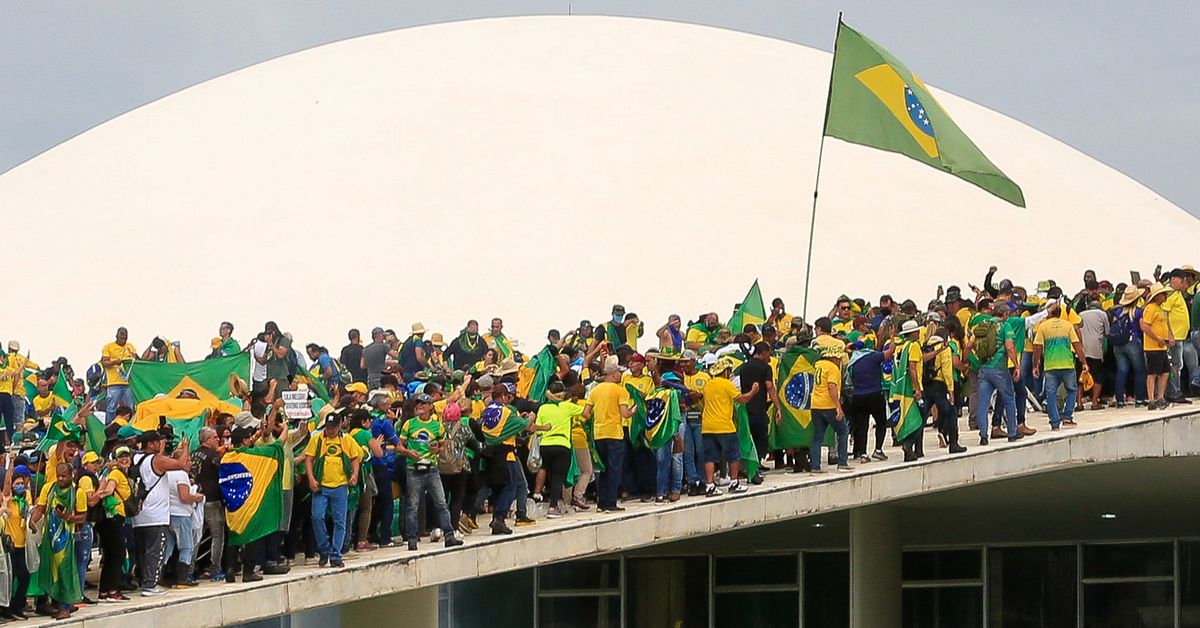 For months, and really yearsbefore Brazil’s 2022 presidential election, Jair Bolsonaro sowed doubts about Brazilian democracy and electoral institutions. On Sunday, backers of the right-wing former president proved the potency of that message as they stormed the seats of government power in Brasilia.

The attack proved the strength of the right-wing movement that Bolsonaro helped rekindle may outlast the man himself, even as Brazil’s democratic and judicial institutions have responded quickly and aggressively to the threat.

At least 1,200 people have been detained for questioning in the aftermath of the riots, where mobs attacked the Supreme Court, Congress, and the presidential palace in the capital. The Supreme Court suspended the governor of Brasíliaaccusing him of abetting the violence, and a top justice promised to hold accountable all those responsible for the riots, including financiers and public officials, security forces dismantled tent camps set up by Bolsonaro supporters, who’d been staked out for weeks after bolsonaro Brazil’s presidential runoff to left-wing president Luiz Inácio Lula Da Silva, known as Lula.

Bolsonaro never conceded the election, but institutions and politicians, including political allies of Bolsonaro, lined up to validate Lula’s victory. Lula was inaugurated, as planned, on January 1, promising to be a president for all Brazilians, Bolsonaro slunk off to Florida,

But, on January 8, with Lula a week into his term, supporters loyal to Bolsonaro unleashed an attack on the country’s democratic symbols, the worst assault on democracy since Brazil transitioned away from a military dictatorship in the 1980s.

It was an uprising that was ultimately going to fail, at least when it came to reversing or influencing an electoral outcome. But it was still a very public show of force for a Bolsonarismo, and that may have been a victory in itself.

What does this say about the strength of Bolsonarismo?

On the day the mobs swarmed, the political process had run its course. Lula was sworn into office on January 1, the transition over and his government in place. Bolsonaro had been out of power for a week, doing random things as a florida man, (On Monday, Bolsonaro was reportedly hospitalized for abdominal painpossibly connected to a stab wound he received during the 2018 election.)

But this assault may have been less about elections past and more about the future of the right-wing movement in Brazil. Congress was in recess at the time, leaving the building mostly empty. Lula was away from the presidential palace. But the images of Bolsonaro supporters, clad in yellow and green, scaling walls, breaking windows, and swarming the seats of power, nevertheless showed a government under siege. “They created all the images they wanted, they knew they would be arrested — they wanted to create martyrs,” said Rosana Pinheiro-Machado, a professor in the School of Geography at the University College Dublin, who has studied the far right in Brazil. .

Pinheiro-Machado said the narrative of their heroism is already taking root on social media channels like Telegram and WhatsApp. Hundreds may have been arrested, but it is being framed as an injustice by the powerful to tamp down the people. “They were making history, they were making revolution. That’s their view,” Pinheiro-Machado added.

That is a powerful story taking root, and an expression of outrage that goes beyond disappointment over an election result. Bolsonaro supporters seemed to be saying that, whether or not their guy is in power, they are not going away. “It’s not just about the ‘election was stolen, we want our guy back in there,'” said Andre Pagliarini, an assistant professor of history at Hampden-Sydney College and fellow at the Washington Brazil Office. “It’s ‘maybe democracy itself isn’t worth it if Lula and the Workers’ Party keep winning elections.’ And that’s a bigger challenge than Bolsonaro.”

Bolsonaro condemned the violence, saying peaceful demonstrations are part of democracy but not invasion of buildings (though he also took a dig at the left). But his words might not matter as much now. Bolsonaro consolidated the right-wing movement, gave it a platform at the highest seat of power, but it seems prepared and ready to move beyond him. How strong that movement is will depend on many things — and already there are signs that Brazil’s institutions are prepared to meet the challenge head-on.

Brazil’s democratic institutions are so far surviving the test. But in Brazil, as elsewhere, this challenge is not over.

The response of Brazil’s political leaders and institutions to the January 8 riots has been unified and strong. Such attacks will not be tolerated; the perpetrators, at all levels, will be held accountable.

All of the major political figures in Brazil have condemned the riots. Lula, along with the leaders of both branches of Brazil’s Congress and the Supreme Court, issued a statement together denouncing “terrorist acts, The solidarity from Congress is particularly notable, given that Bolsonaro’s party and other right-leaning parties hold a lot of power within those bodies. Lula returned to Brasília and met with the leaders of those other branches of government in the attack’s aftermath. Congress is returning from recess and might also launch an investigation. “I think the power balance was adjusted, in a way, in a way that works for democracy,” said Nelson Rojas de Carvalho, associate professor at Universidade Federal Rural do Janeiro.

Still, there are plenty of outstanding questions about these riots, including the apparent lack of preparedness of security forces for this unrest. There are also questions of complicity, especially since Bolsonaro supporters set up their tent city right outside the military barracks, which the now-Justice Minister had warned were “incubators of terrorism, Videos posted to social media shown police standing by or chatting with protestors,

Security forces have since cleared the camps of Bolsonaro supporters. Lula has declared a state of federal intervention in Brasília until January 31, which allows federal authorities to temporarily supersede those of the state. The Supreme Court also reacted quickly, removing the federal governor of Brasília for his potential role in the riots. Hundreds have been detained for questioning, in addition to those arrested at the scene of the attacks. Brazil’s Justice Minister Flavio Dino said sunday that officials identified those who paid for 40 buses to bring Bolsonaro supporters to Brasília, and they are in the process of issuing arrests for them. “The early moves indicate they’re really up to the task, they’re going to aggressively fight this challenge to democracy. Lula seems invigorated by it,” Pagliarini said. He added that there seemed to be a new willingness and eagerness to investigate this network, which, for obvious reasons, faced few consequences when Bolsonaro was in office.

That solidarity and lack of equivocation is Brazilian democracy’s best response to the challenges to it. Still, experts pointed out, there is a delicate balance to walk — already some right-wingers are pointing to government overreach, like removing the governor of Brazil — as a sign of Lula’s own dictatorial, communist tendencies. (Which, again, is pretty rich from people who just tried to overthrow democracy and are calling for the military to intervene.) But even though it may fuel the right-wing narrative against Lula, using the judicial system and the rule of law to Investigate and prosecute these forces may be one of the most necessary tools to unravel the antidemocratic movement.

Because the challenge of the far-right movement in Brazil will likely persist and continue to create chaos during Lula’s term and beyond. smaller protests continued on Monday, with protesters blocking roads in São Paulo. The aftermath of January 8 very much sets up a contest between the antidemocratic pressures that Bolsonaro helped reignite and the democratic and institutional forces that are trying to protect and preserve democracy, along with govern and deliver for the people at a time of economic uncertainty and hardship. .

In this way, Brazil’s January 8 is like the United States’ January 6. It’s not really about a singular event, but an ongoing struggle. No one election can defeat those authoritarian impulses, just as one violent mob can’t take down an entire democracy. “We have these two worlds, running together. This is how the world is structured today — and in the end, this is going to last for many years,” Pinheiro-Machado said.