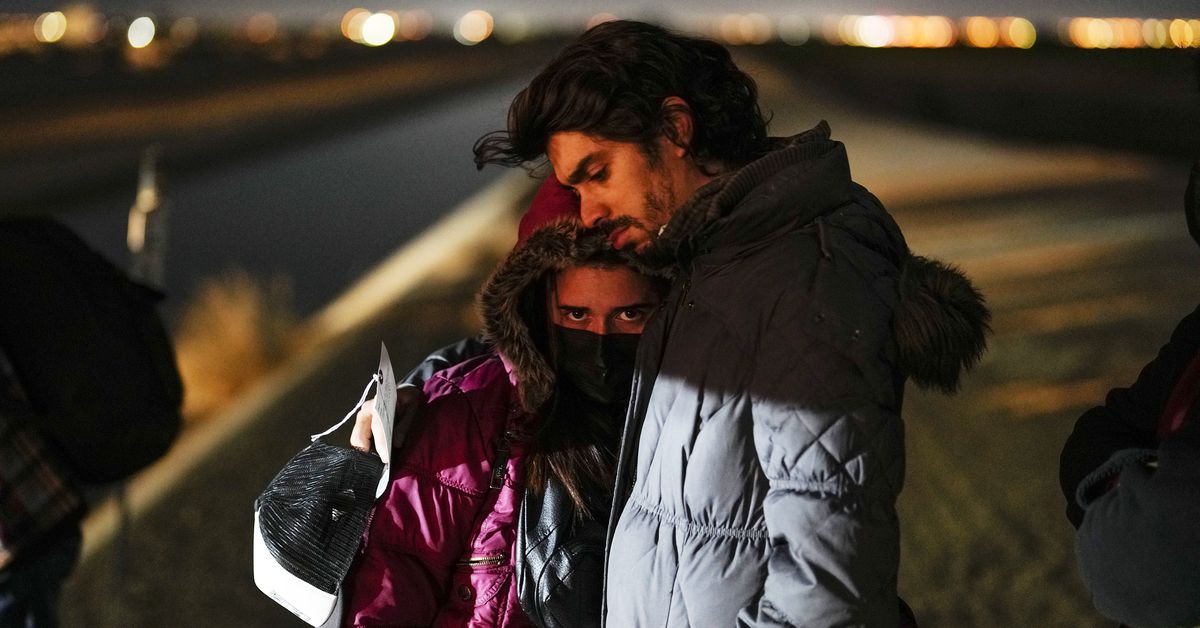 The new rule doesn’t replace Title 42, the contentious authority former President Donald Trump imposed at the height of the Covid-19 pandemic that allows the US to rapidly expel migrants, ostensibly to limit the spread of the disease. Instead, the new rules expand the powers granted under Title 42, enabling the administration to rapidly expel certain migrants who don’t follow the correct procedure to apply for humanitarian parole.

Biden has said that the new rules aren’t a permanent solution to stalled congressional immigration reform, but a stopgap to deal with an overwhelming influx of people trying to enter the US. In fiscal year 2022, border encounters reached 2.76 millionan increase of 1 million over the previous year.

The aim of the new program is to stop people from crossing outside an official port of entry without a visa status, as millions of migrants who enter the US through the southern border do. Since Biden’s new rules have taken effect, entering without the financial sponsorship and background checks required to obtain humanitarian parole is an automatic disqualification for the program, even if a migrant is from an eligible country of origin.

The new rules may complicate many migrants’ attempts to seek asylum, as they have a right to do. It also potentially exposes them to great risk in Mexico, where they will be sent should they fail to meet the new criteria, and which is ill-equipped to protect or provide for them.

Although the new, embattled Speaker of the House Kevin McCarthy has vowed to take on immigration reform, the realities of both a divided Congress and his own diminished power call into question what he might be able to accomplish. And that means this new rule, and any others the Biden administration decides upon, are likely to guide US immigration policy for the months — and even years — to come.

What do the new rules entail?

The new humanitarian parole program applies to people from four nations: Cuba, Haiti, Venezuela, and Nicaragua. Under the new programme, only 30,000 per month total from these four countries will be eligible for humanitarian parole.

Under Biden’s new rules, people from those four nations seeking safety in the US must have a sponsor — someone who is financially responsible for them — for two years, enter through a legitimate port of entryapply for the status online before they arrive, pass rigorous vetting, and have not attempted an irregular crossing after January 5, 2023.

These four nations have been singled out for the program because of the uptick in encounters—in some cases, as much as a sixfold increase in just a year—at the border. Also a factor is the difficulty of deporting migrants back to their countries of origin; Venezuela, Nicaragua, and Cuba in particulardue to tense or nonexistent diplomatic relationships with the US, don’t readily accept deportations, and the administration’s deportation of Haitian migrants to a nation in severe turmoil has brought about public condemnation and even caused Daniel Footea former special envoy to Haiti, to resign in 2021.

Those who attempt a land crossing outside a legitimate port of entry will be rapidly expelled under the Title 8 statute or the more expedient Title 42 authoritywhich is not immigration law, but rather a public health authority— and a scientifically dubious one, at that, Title 42 was originally meant to stop the spread of Covid-19; with about 70 percent of the US now fully vaccinatedmost public health experts believe the authority no longer has much utility.

The Biden administration attempted several times last year, most recently in December, to end the program, sparking anxiety in border cities and towns about an uncontrollable flood of migrants. However, the Supreme Court issued a stay on the DHS’s plan to roll back the rule. Biden’s new rules rely on that stay, amping up the expulsions under Title 42 and persisting in using the rule as immigration policy.

Separately, the Department of Justice and the DHS proposed a new rule on January 5, not yet in place, which would require migrants seeking asylum in the US to first request — and be turned away from — refuge in another country through which they transited on their way to the border.

Underlying both Republicans’ frustration with the uptick in irregular border crossings and the questionable tactics the government has deployed to combat them is the fact that immigration law has been in stasis for decades, with few significant updates to match the realities, particularly at the southern border. .

Bipartisan efforts in the Senate, including an end-of-the-year push by Sens. Kyrsten Sinema (I-AZ) and Thom Tillis (R-NC), have floundered. McCarthy has pledged to tackle immigration in his new role. promising “no more ignoring this crisis of security and sovereignty,” though what that would entail besides impeaching DHS head Alejandro Mayorkas and holding hearings on the issue at the southern border is not clear.

What the new system means for migrants

In Cubadeepening poverty due to the impact of tightened US sanctions and the impact of the Covid-19 pandemic, as well as political repression in the wake of mass antigovernment protests in 2021, caused an attempted 220,908 crossings at the southern border in 2022, a nearly sixfold increase from the previous year according to data from the Department of Homeland Security,

DHS has already been utilizing the humanitarian parole program with Venezuelan migrants since October of 2022, following a sharp increase — from 2,787 encounters in 2020 to 187,716 in 2022 — in encounters at the southern US border. In Venezuela, too, the economy spiraled over the past decade and despite some improvement last yearinflation reached a crippling 155 percent in October, according to Reuters, causing about 7 million Venezuelans to leave the country. Since implementing the humanitarian parole program for Venezuelans, DHS has seen a 76 percent decrease in irregular border crossings, the Washington Post reported Thursday, citing government data.

In 2022, DHS sees 163,876 encounters with Nicaraguans, more than triple that of the previous year. Political repression in the country has intensified under President Daniel Ortega, with the government killing and detaining protestors and political opponents, holding what many assess to be sham elections, and silencing civil society organizations and the free press, according to Human Rights Watch, And Haitians, who attempted 53,910 crossings at the southern border last year, have suffered from gang violencenatural disaster, and political instability — most recently following the assassination of President Jovenel Moïse in 2021.

All this means potential migrants who don’t meet the qualifications for the new program and attempt entry anyway will be expelled to Mexico or deported back to their country of origin.

Despite the desperation in these countries, migrants coming to the US from Cuba, Venezuela, Nicaragua, and Haiti won’t be able to claim asylum under the new program. Claiming asylum is a legal process by which a person, due to a severe threat to their life because of their identity or for political reasons, seeks refuge in another nation. It requires significant documentation and proof of danger to the person’s life due to factors out of their control. The humanitarian parole program, however, is more restrictive and only lasts two years, after which time they will be expelled or have to leave (though re-paroles are granted in specific cases,

That’s the main issue for critics of the new policy: Even though it identifies a legal pathway for people in crisis to come to the US, it prevents many more who are likely highly vulnerable — without a financial sponsor, a safe and legal route, or the ability to apply for the program online — from applying for asylum, shuttling them to Mexico in unsafe and inadequate conditions, or stranding somewhere along the route from their home countries to the US.

Mexico has agreed to take in an additional 30,000 people per month who attempt an irregular border crossing. Although the Biden administration has also attempted to end the so-called “Remain in Mexico” program, which requires migrants to wait for US asylum hearings in that country, and even stopped enrolling migrants in it in August, it’s technically still in place, It’s not clear how many migrants awaiting their asylum hearings are still being kept in Mexico, but Human Rights Watchas well as other human rights groups, documented the dangers that faced them there, including rape, kidnapping, torture, assault, and murder.

Biden’s new policy is far from a long-term solution to the immigration crisis that’s plagued the country for decades, but it also doesn’t have an ending point, and it’s not clear what the long-term prospects are even for those who receive humanitarian aid. parole. Without immigration reform at the congressional level, there’s no end in sight for the slapdash policies that have been the norm for the past several years, both under Trump and Biden.