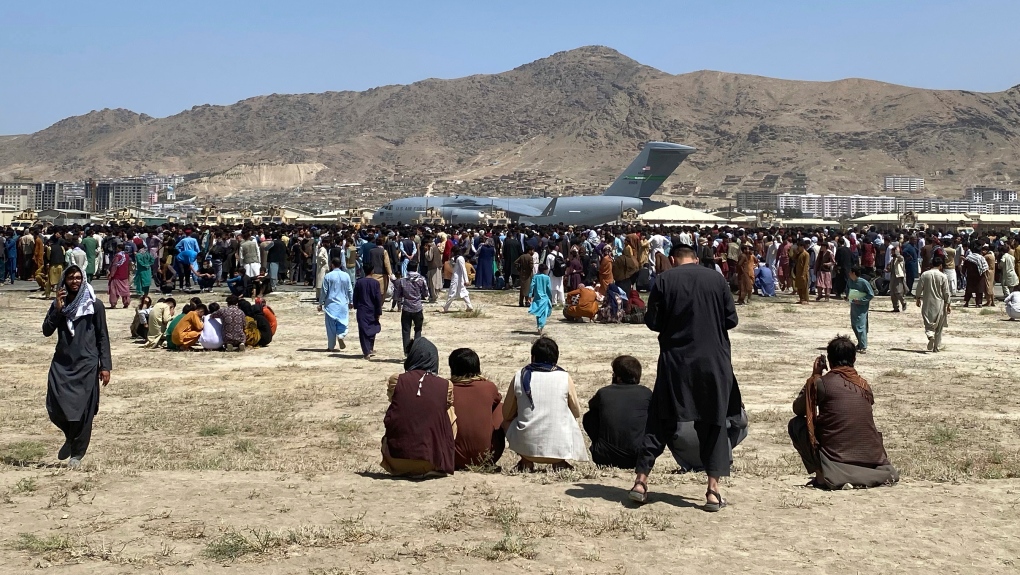 The Afghan woman ran down the street toward her friend’s apartment as soon as she heard the news: the White House had publicly weighed in on her family’s case.

Surely her child, who she says was abducted by a US Marine more than a year ago, would now be returned, she thought. She was so excited that it was only after she’d arrived that she realized she wasn’t wearing any shoes.

“We thought within a week she’d be back to us,” the woman told The Associated Press.

Yet two months after an AP report on the high-stakes legal fight over the child raised alarms at the highest levels of government, from the White House to the Taliban, the baby remains with US Marine Corps Major Joshua Mast and his family. The Masts claim in court documents that they legally adopted the child and that the Afghan couple’s accusations are “outrageous” and “unmerited.”

“We are all concerned with the well being of this child who is at the heart of this matter,” said White House Press Secretary Karine Jean-Pierre after the AP detailed the child’s plight in October.

Last month, the US Justice Department filed a motion to intervene in the legal wrangling over the fate of the child, arguing that Mast’s adoption should never have been granted. The government has said Mast’s attempts to take the child directly conflicted with a US foreign policy decision to reunite the orphan with her Afghan family. They asked that the case be moved from a rural Virginia court to federal court, but were denied by Presiding Circuit Court Judge Richard E. Moore.

“We all just want resolution for this child, whatever it’s going to be, so her childhood doesn’t continue to be in limbo,” said Samantha Freed, a court-appointed attorney assigned to look after the best interests of the child. “We need to get this right now.

The legal fight has taken more than a year, and Freed is worried it could take months — maybe even years — more. The child is now 3 1/2 years old. The Afghan family spoke with the AP on condition of remaining anonymous out of fear for their safety and concerns for their relatives back in Afghanistan.

Mast became enchanted with the child while on temporary assignment in Afghanistan in late 2019. Just a few months old, the infant had survived a Special Operations raid that killed her parents and five siblings, according to court records.

As she recovered from injuries in a US military hospital, the Afghan government and the International Committee of the Red Cross identified her relatives, and through meetings with the State Department, arranged for their reunification. The child’s cousin and his wife — young newlyweds without children yet of their own — wept when they first saw her, they said: Taking her in and raising her was the greatest honor of their lives.

Nevertheless, Mast — in spite of orders from military officials to stop intervening — was determined to take her home to the United States. He used his status in the military, appealed to political connections in the Trump administration and convinced the small-town Virginia court to skip some of the usual safeguards that govern international adoptions.

Finally, when the US military withdrew from Afghanistan last summer, he helped the family get to the United States. After they arrived, he says, he took their baby from them at the Fort Pickett Virginia Army National Guard base. They haven’t seen her since and are suing to get her back.

The Afghan woman gave birth to a daughter just weeks after the girl they’d been raising was taken from them. Every time they buy an outfit or a present for their daughter, they buy a second matching one for the child they pray will come back to them soon.

The Masts did not respond to repeated requests for an interview. Stepping out from a recent hearing, Joshua Mast told AP they’ve been advised not to speak publicly.

In court filings, Mast says he acted “admirably” to bring the child to the United States and care for her with his wife. They say they’ve given her “a loving home” and have “done nothing but ensure she receives the medical care she requires, at great personal expense and sacrifice.” Mast celebrated his adoption of the child, whose Afghan family is Muslim, as an act of Christian faith.

The toddler’s future is now set to be decided in a sealed, secret court case in rural Virginia — in the same courthouse that granted Mast custody. The federal government has described that custody order as “unlawful,” “improper” and “deeply flawed and incorrect” because it was based on a promise that Afghanistan would waive jurisdiction over the child, which never happened.

The day Mast and his wife Stephanie Mast were granted a final adoption, the child was 7,000 miles away with the Afghan couple who knew nothing about it.

In court, Mast, still an active duty Marine, casts doubt on whether the Afghan couple is related to her at all. They argue that the little girl is “an orphan of war and a victim of terrorism, rescued under tragic circumstances from the battlefield.” They say she is a “stateless minor” because she was recovered from a compound Mast says was used by foreign fighters not from Afghanistan.

The case has been consumed by a procedural question: Does the Afghan family — who raised the child for a year and a half — have a right under Virginia law to even challenge the adoption?

Judge Moore ruled in November that the Afghan family does have legal standing; the Masts’ appeal is under review.

The child’s Afghan relatives, currently in Texas, believe the US government should be doing more to help them, because numerous federal agencies were involved in the ordeal.

“The government is not doing their job as they should,” said the Afghan woman. “And in the process, we are suffering.”

“We recognize the human dimension of this situation,” said the official.

The Department of Defense said in a statement that the decision to reunite the child with her family was in keeping with the US government’s foreign obligations, as well as international law principles that mandate family reunification of children displaced in war. The Defense Department said it is aware that Mast “took custody” of the child but declined to comment further.

The Afghan couple pleaded for help from the tangle of agencies at Fort Pickett: the military, the State Department, the Department of Homeland Security, the Federal Bureau of Investigation, the police. Some didn’t believe them, some said there was nothing they could do, some tried to intervene to no avail.

The couple eventually reached Martha Jenkins, an attorney volunteering at the base.

“When I first heard their story, I thought there must be something lost in translation — how could this be true?” said Jenkins. She contacted authorities.

Almost two months after they lost the child, Virginia State Police dispatch records were obtained by the AP show “an advocate” called to report what had happened.

“The family is at Fort Pickett, they are requesting an investigation into the validity of the adoption and if it was done under false pretenses,” wrote the dispatcher. The record notes that the Department of Homeland Security and the FBI were involved.

Jenkins, who was in Virginia temporarily, called every Virginia adoption attorney she could find until she reached Elizabeth Vaughan.

“It was very surprising to me that no one helped them,” said Vaughan, who offered to represent the Afghan couple for free. “I don’t think they had a lot of the paperwork. Americans like to see when someone’s proving that they have custody. But there are laws about people, trusted adults, who arrive with a child. So much more investigating should have been done. ”

A Marine Corps spokesperson wrote in a statement that they are fully cooperating with federal law enforcement investigations, including at least one focused on the alleged unauthorized removal and retention of classified documents or material. In emails Mast sent asking for help bringing the child from Afghanistan, now submitted as exhibitions in court, he referenced reading classified documents about the raid that killed the girl’s family.

Investigators and prosecutors declined to comment, citing the ongoing inquiries.

On the other side of the globe, the Taliban issued a statement saying it “will seriously pursue this issue with American authorities so that the said child is returned to her relatives.”

Now every night before bed, the Afghan couple scroll through an album of 117 photos of the year and a half they spent raising her — a sassy child with big bright eyes, who loved to dress up in shiny colors and gold bangle bracelets. There’s a photo of the child wearing a black and green tunic and tiny gold sandals, nestled on the young Afghan man’s lap, smiling mischievously at the camera. In one video, she runs alongside a man in their old Afghan neighborhood, bouncing down the sidewalk to keep up with his stride.

They’ll soon be moving to a new two-bedroom apartment. There, they say, the little girl’s room will be ready for her, whenever she comes home.