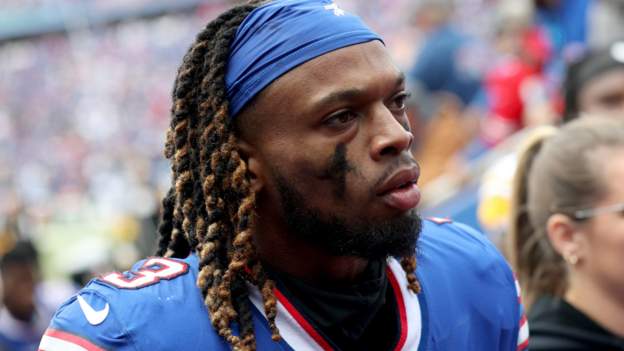 Buffalo Bills safety Damar Hamlin has been discharged from the hospital, nine days after his cardiac arrest during an NFL game.

Hamlin, 24, collapsed during a match on January 2 after making a tackle and had to be resuscitated on the pitch.

Doctors said they were “confident Damar can be safely discharged to continue his rehabilitation at home and with the Bills”.

They said he has undergone “comprehensive evaluation” and tests.

The incident has sparked scenes of widespread support from players and supporters at NFL matches since.

Hamlin was rushed to intensive care after requiring more than 30 minutes of medical attention on the field following a tackle on Cincinnati Bengals wide receiver Tee Higgins.

Players from both teams gathered around Hamlin as emergency medical staff gave CPR and oxygen. Several were seen visibly distressed, with many kneeling to pray and some in tears, and the game was called off.

He spent two days on a ventilator but doctors said he was walking around the hospital unit by Friday.

On Monday he was discharged from a hospital in Cincinnati, the city where the match took place, and moved to another in Buffalo.